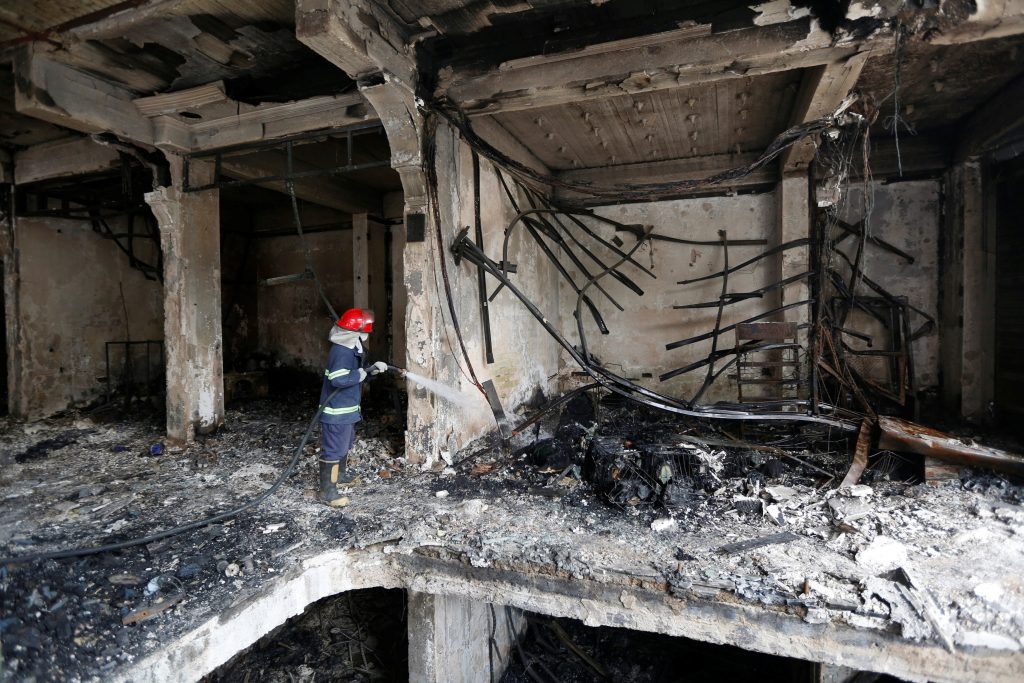 The death toll from a suicide bombing on a busy Baghdad shopping street rose to more than 200 Monday as victims succumbed to their injuries and rescuers pulled out bodies from the charred shops and malls, making it the Islamic State’s deadliest-ever bomb attack on civilians.

Most of those killed died in a huge fire that burned down shops and consumed several small malls after the suicide attacker detonated his explosives-laden car in the Karrada area of Baghdad in the early hours of Sunday.

At the moment of the blast, the street was full of families doing late-night shopping during the Muslim month of Ramadan, while cafes were packed with young people.

Iraq is regularly struck by suicide bombings that turn its markets and streets into scenes of horror, but Sunday’s attack was unusually brutal even for a country so torn by violence. It was one of the worst bombings Iraq has seen since the 2003 U.S.-led invasion, and the most deadly carried out by Islamic State terrorists since the group formed three years ago as an offshoot of al-Qaida in Iraq.

The bombing followed attacks in Turkey and Bangladesh over the past week that have been linked to the Islamic State, but far outstrips them in the number of people killed. As more were confirmed dead Monday, the death toll climbed past that of the Paris attack last year, when Islamic State gunmen and suicide bombers killed 130 people.

The international outpouring of grief, however, was more muted for this city, as the civilians of the Middle East continue to bear the brunt of the bloodshed caused by the terrorists. Iraqis turned their anger at the government, as well as at bomb detectors that are still widely used in Baghdad but were proved years ago to be fake and have become a symbol of state incompetence.

Volunteers and rescue workers were still hunting for the missing Monday, but many bodies unearthed in the scorched debris were too badly burned to identify.

Some 192 people were killed and more than 250 injured, according to health officials who spoke on the condition of anonymity because they were not authorized to give the information. But they said that figure only included bodies that had been brought to the city’s hospitals and the injured who had died in them. Ziad Ali al-Yousif, the head of Baghdad’s morgue, said between 30 and 40 more unidentified bodies had been brought directly to the morgue and had not passed through the hospitals, bringing the total death toll to at least 222.

Mohammed al-Rubaie, deputy head of the Baghdad provincial council’s security committee, who said he had been traveling between hospitals and tallying the dead, said that 225 died.

A crowd of hundreds gathered at the bomb site Sunday night to light candles in memory of the victims, and black banners had been hung on walls with the names of the dead.

Relatives of the missing were also gathered, desperate for news about their loved ones. Some gathered in groups crying.

“I looked in all the hospitals but I haven’t found my son,” said Fathi Kareem, 63, holding a photo of the missing 25-year-old who he said had gone out to buy clothes. “I just want to find him to bury him.”

Witnesses said the fire spread rapidly after the blast, with perfume shops in the area helping to fuel the flames. It destroyed two small shopping centers.

At the bomb site, anger grew. “Your corruption is killing us,” the crowd chanted, next to the blackened store fronts.

Frustration has been aimed at Iraqi Prime Minister Haider al-Abadi, who was pelted with stones, bottles and shoes when he visited the site of the attack.

The premier has tried to enact a series of reforms to curb corruption in the country and meet the demands of street protests, but he has proved too politically weak to implement them in a country were graft runs deep. As Iraqis vented their rage at the fake bomb detectors, Abadi on Sunday night ordered that they be removed from checkpoints. The move come six years after the British man who sold thousands of the devices to Iraq was arrested in the U.K. for fraud in connection with the sales.

But Abadi’s move did little to appease citizens so tired of bloodshed.

“I blame the government for everything that happened,” said Jaffar Taha, 31, who was looking for the bodies of two of his friends who had worked in the Hadi shopping center. He brought up the fact that the street had been closed to traffic for an hour earlier on Sunday evening because of a suspected attack. “Why did they open it again?” he said.

Ibrahim Hassan, 28, who was also searching for bodies, shared his sentiment.

“The government treats us like animals and they don’t care about what happens to us,” he said. “All they care about is how much money they will get by selling our blood.”

The latest bombing is likely to further fuel months of protests against the government. In late May, Abadi launched an operation for the Islamic State-held city of Fallujah earlier than planned, in what analysts say was an attempt to distract attention from his political troubles.

The Shiite cleric Moqtada al-Sadr, who has been a driving force behind the protests, had already said he planned to call his supporters back to the streets at the end of Ramadan, which finishes this week.

Sadr reiterated his long-standing call for government ministers to be replaced. But with parliament divided and parties eager to maintain their control, Abadi faces a huge challenge in getting any change through parliament.

“The government is doing nothing to stop these explosions,” Sadr said. “It just washes away the blood after the bombing to remove the evidence.”