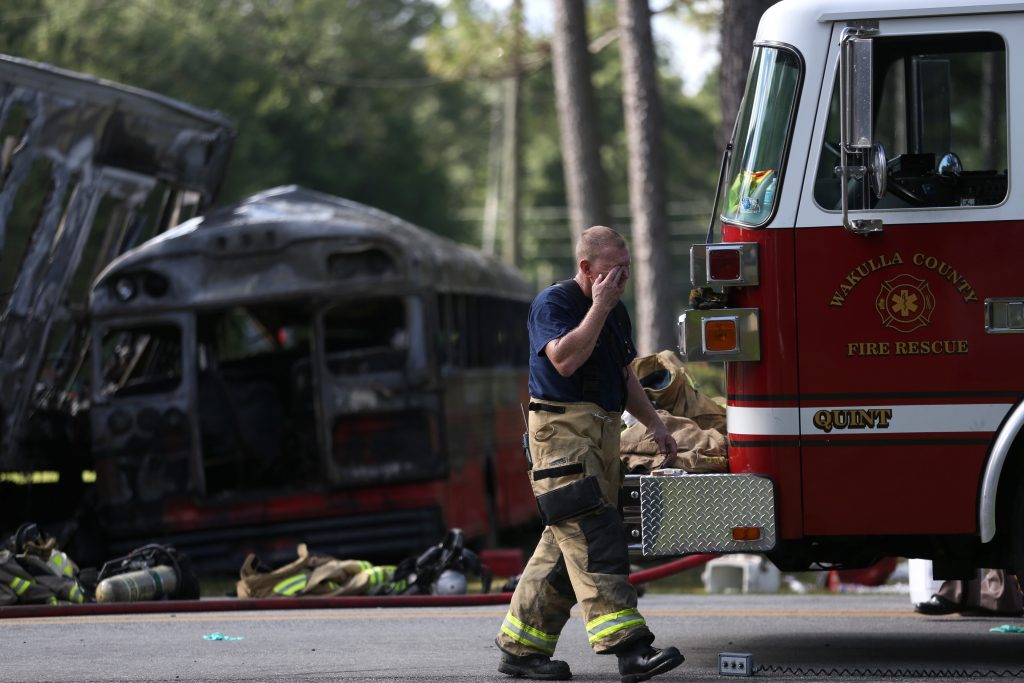 Authorities were investigating Sunday what caused a driver of a decades-old school bus to run a flashing red light and collide with a tractor-trailer, causing both vehicles to burst into flames and killing five people and injuring 25 others.

“We don’t know what happened to the driver. He might have fallen asleep, he might not have seen the flashing red light,” Creel said. “From what I’ve seen, there was not a speed factor.”

The driver of the bus, 56-year-old Elie Dupiche of Belle Glade, was hospitalized in critical condition. A passenger in the semi-truck, 21-year-old Rafael Nieves of Sound Beach, New York, was not injured, according to the Florida Highway Patrol.

Deputies responded to a gruesome and chaotic scene after the Blue Bird bus from Georgia, carrying roughly 34 adults and children, hit the tractor-trailer and then spun around to hit the semi again, authorities said. The vehicles went off the road and came to rest under a power line, both on fire.

“Our deputies are heroes … our deputies got on the bus and started pulling people off, people that were not able to get off by themselves. They pulled out two deceased victims,” said Creel.

He said deputies continued to rescue victims until the bus was fully engulfed in flames and they were forced to stop.

“If these deputies had not done that, we would have had a lot more fatalities,” the sheriff said, adding that they were eventually “driven back” by the flames that then fully engulfed the tractor-trailer.

He told The Associated Press in a telephone interview that one of the bus passengers killed was a small child. The driver of the semi-truck, Gordon Sheets, 55, of Copiague, New York, also died, Creel said.

No one on the bus spoke English and authorities brought in interpreters, Creel said. He said the bus had left Bainbridge in south Georgia, not far from the Florida Panhandle area, and was bound for Belle Glade, Florida.

He said the bus was headed south on a north-south state road when it collided with the tractor-trailer, which was westbound on U.S. 98 — a Florida coastal highway.

Florida Highway Patrol officials were also investigating the wreck and were in the processing of notifying the victims’ family members.