Business AUTO REVIEW: 2016 Buick Cascada Convertible Could Be Cool If Not for the Controls
Business 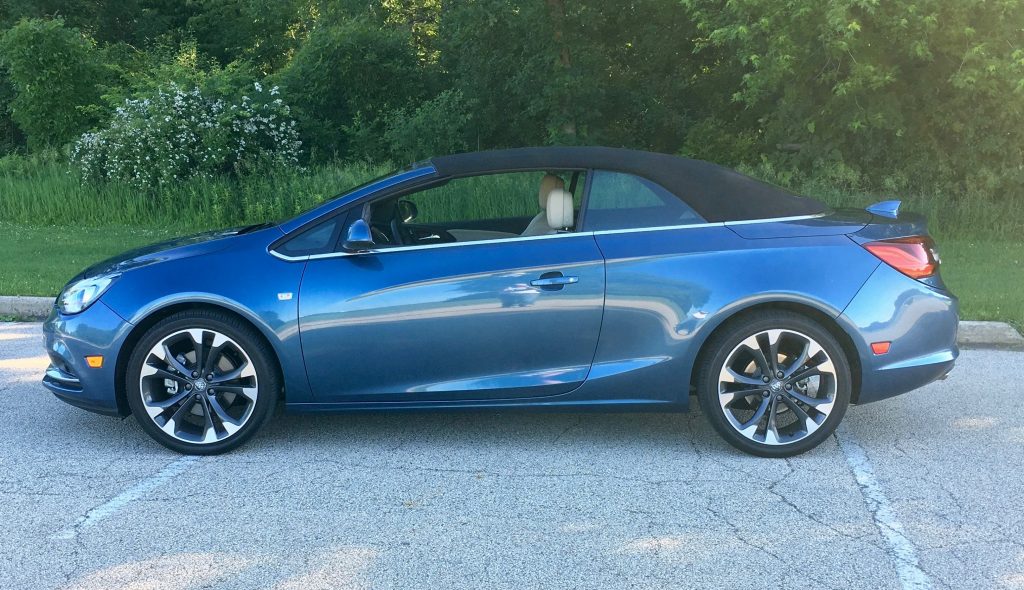 The Buick Cascada is a Pop-Tart. It looks great on the outside but the inside is jammed with junk.

The main problem with the sleek convertible is the congested center stack. There are 13 buttons for climate control, two dials for temperature, 22 buttons for multimedia, another half dozen for safety systems and the lock/unlock button is sandwiched at the top, right below the recessed touch screen that is nearly unreachable.

Aesthetically, it’s a mess. Functionally, it isn’t much better. The voice-activated calling features did not work when our phone was plugged in. The vehicle info display between the tachometer and speedometer is an 8-bit graphic in red that is as fresh as a 1980s video game. The redundant steering wheel controls simplify multimedia inputs, but the overall system is an inconvenience at best.

Being this critical of an infotainment system, which can be swapped out comparatively easier than anything mechanical, might seem out of proportion.

But the center stack is the main source of a driver’s daily interaction aside from the steering wheel and pedals, and it overwhelms an interior that could be premium if not luxurious.

It should be easy to fix, if fixes of a global nature can ever be easy.

The Cascada has been sold by Opel in Europe, Holden in Australia and Vauxhall in the U.K. Such a broad market with such varied demographics might explain why the interior suffers from trying to please everyone, without being characteristic enough to satisfy anyone.

Its arrival in the U.S. as a Buick makes sense. It’s the only compact convertible that can reasonably sit four adults. The Lexus IS convertible, VW Eos, and Chrysler 200 are gone, the Mustang and Camaro convertibles are not in the same class, so only German models such as the A3 and A5 convertible or BMW’s 4-series are available for premium car shoppers. The Cascada is the only pure convertible without a coupe or sedan counterpart, and is aimed for the vast majority of car buyers who don’t place a premium on performance.

It uses a 1.6-liter turbocharged four-cylinder engine with direct injection that goes nowhere fast. It hits 60 mph in just under nine seconds, due to its well-contained size. It weighs just shy of 4,000 pounds, more than most crossovers. The weight largely stays up front in the front-wheel driver that, along with a bland six-speed automatic, adds up to a shrug behind the wheel.

The turbo is meant more for economy than power. We averaged 29 mpg on the highway, 2 mpg over the EPA estimate.

There isn’t much grip from the tires on those 20-inch wheels, and the skidding comes easy. There’s no sense throwing it into corners — the understeer would send the Cascada off the road.

All of that is excusable; it is not a performance convertible. The Cascada is all about basking in the open-roof experience and, in this, it succeeds. It is inherently fun, and even the center stack can’t ruin that.

The soft top folds into the hard tonneau cover in just 17 seamless seconds, though your finger must stay on the lever in the center console. And it can be dropped or raised at speeds up to 31 mph. It’s not loud when the top is up and, when it’s down, the Cascada is just about everything you want in a cruising convertible.

It looks about as good as you’ll feel, too. A handful of passersby stepped unwittingly right into Buick marketing, pleasantly surprised that it was in fact a Buick. The 20-inch wheels are almost too big for a car this size, but the stretched wheelbase gives it some balance and plenty of interior space. The windshield is raked, or flat, so it looks as if it’s an extension flowing from the hood.

The interior comes well-equipped standard, with creamy, leather-appointed seats and a steering wheel that is heated. There is a base and premium ($3,000 more) trim level, which includes lovely conveniences such as the seat belt presenter that makes the belt easier to reach over your shoulder.

The rear seats are easy to get in and out of, thanks to automatic sliding, as well as buttons and a latch accessible from the rear seat position. The premium trim is also loaded with a bundle of advanced safety features, including lane departure warning and rear park assist. Since it’s so heavy, it feels safe. Active roll bars behind the rear seats deploy to the height of the windshield when the air bags are activated.

The Cascada fills a void in the market for convertibles meant to cruise. It is not going to be an everyday driver, but once in a while, like a Pop-Tart, it can be a fun way to start the day.

2016 Buick Cascada Premium at a glance

Parting shot: The mechanical mediocrity is justifiable, the jammed-up center stack is not.