One Jew Murdered, Three Injured in Terror Attack Near Chevron

Tragedy struck near Chevron on Erev Shabbos, as a Jew was killed and three members of his family injured in a terror attack.

The horrific attack occurred on Route 60, near the town of Otniel, in the southern Chevron Hills, as a vehicle driven by terrorists opened fire on a vehicle carrying members of a Jewish family, which then crashed and flipped over. The gunfire and impact of the accident killed Rabbi Michael Mark, and injured his wife and two of his teen-aged children, r”l.

The mother and two injured children were taken to Hadassah Ein-Kerem hospital in Yerushalayim. The mother is in critical condition, one child is in moderate condition and one child has light injuries. 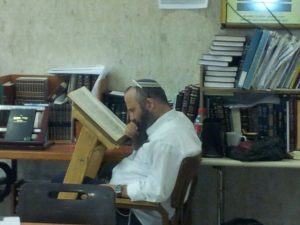 Rabbi Mark, Hy”d, the menahel of the Yeshivat Otniel, was a well-known and beloved member of the community, and a father to ten children. It does not appear that any other children were in the vehicle at the time of the attack.

IDF soldiers were searching for the terrorists, who fled into the hills near Chevron.

Earlier Friday, there were two attempted stabbing attacks in the area of Mearas Hamachpelah. One of the stabbers was shot by IDF soldiers before she could attack anyone. The other one was arrested.

One of attempted stabbers was a cousin of Muhammad Tararia, the terrorist who brutally murdered 13-year-old Hallel Yafeh Ariel, Hy”d, on Thursday, as she slept in her bed in her home in Kiryat Arba.