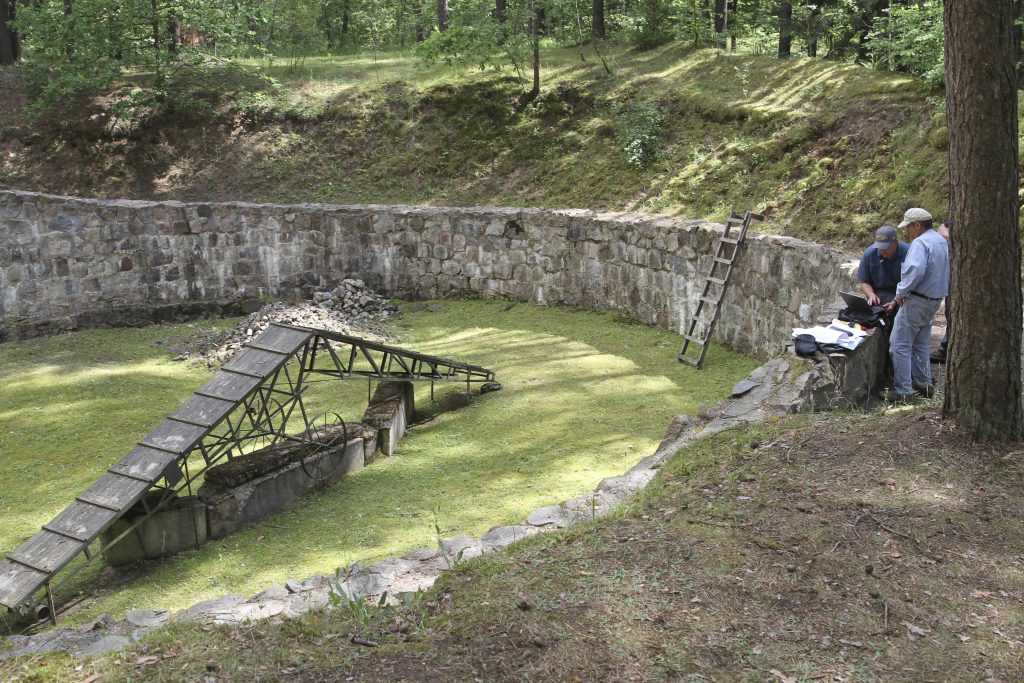 In a Lithuanian forest, an international team has pinpointed the location of a legendary tunnel that Jewish prisoners secretly dug out with spoons to try to escape their Nazi captors during World War II, researchers announced Wednesday.

The tunnel, located in the Ponar forest (known today as Paneriai) outside the Lithuanian capital of Vilnius, is the site where between 70,000 and 100,000 people were murdered, mostly Jews. Though most of the prisoners were killed in the process, the escape remains a unique chapter in the dark history of the era.

Noted Holocaust expert Dr. Michael Berenbaum told Hamodia that despite wider knowledge of the infamous Babi Yar massacre, Ponar was actually the largest “killing field” in Lithuania. He also said that some escapes from Nazi captors occurred while in transit, but an escape from captivity itself was “much more difficult and very rare.”

Professor Richard Freund, Maurice Greenberg Professor of Jewish History at the University of Hartford, one of the project’s leaders, told Hamodia that the escape is “a story of the human spirit against all odds.”

“The testimonies about the escape tunnel from Ponar are very detailed, but the ability to look for it deep below the ground has not been available till now,” he said. “Everyone knew where they started this 100-foot tunnel, but not exactly where it went. We found it by taking sections of the direction of the tunnel and painstakingly going across the land above.”

The team began the search from the location of the bunker where the prisoners were held. Eventually they were able to identify the spot by isolating distinctive types of soil pointed in the same direction, 15 feet below ground level.

In the quest to find the tunnel, the team of archaeologists, geophysicists, and Jewish historians from Israel, the United States, Canada and Lithuania did not want to disturb any human remains in the mass burial pits at the site.

So the researchers used scanning technology called electrical resistivity tomography to map out the path of the 34-meter-long (112 feet) tunnel. The method is similar to M.R.I. technology; designed to work beneath the earth’s surface, it is used in industry for locating gas, oil and precious metals.

Rabbi Chaim Burshtein, Chief Rabbi of Lithuania, told Hamodia that the story of the mass murders as well as the escape is “deep in the memory” of local Jews, and he welcomed the ability to preserve the past without desecration of the kedoshim.

“Research on all aspects of Lithuanian Jewry, Lithuania having been one of the most important communities in the history of the Jewish people, is very important,” he said. “As long as it can be done without moving one bone one inch, it is very positive.”

Toward the end of the war, the Nazis sought to erase the evidence of their mass killings. About 80 Jewish and Soviet prisoners were brought to the Ponar forest from the Stutthof concentration camp. With their legs chained, they were forced to dig up the mass graves, collect bodies and burn them. They lived in fear that once their task was complete, they too would be killed.

According to accounts, one prisoner, Isaac Dogim, recognized members of his own family including his wife among the dead. Fearing that he and his fellow prisoners would soon meet the same fate, he initiated a plan to escape.

At night, the prisoners were held in one of the pits used in the killings. For three months, some of the prisoners secretly dug an underground tunnel to escape, using spoons and their bare hands.

Then on April 15, 1944, in the middle of the night, the prisoners filed off their chains and fled through the narrow tunnel. It was the last night of Pesach, and the prisoners estimated that it would be the darkest night of the month.

Guards quickly discovered them and many were shot, but 11 prisoners managed to escape to the forest, reach partisan forces, and survive the war. Their testimony together with a letter that survived from shortly after the escape documented the event, but the tunnel’s location remained a mystery.

“It proves that it actually happened, aside from being an amazing story of Jews helping Jews, and being another example of other types of resistance — to deny the Nazis the ability to take your life, and to try to spread the word of what was happening.”

A Lithuanian archaeologist discovered the tunnel entrance in 2004, but it was left unmarked; further attempts to trace the length were unsuccessful until now, when researchers have identified the entire passage from entrance to exit.

Last year, the same research team began using ground-penetrating radar to investigate the site of the Great Synagogue of Vilna, which was demolished by Soviet authorities after the war. During their time in Lithuania, they offered to help with other projects regarding the country’s rich Jewish history, which led them to their role at the Ponar field.

With reporting from The Associated Press