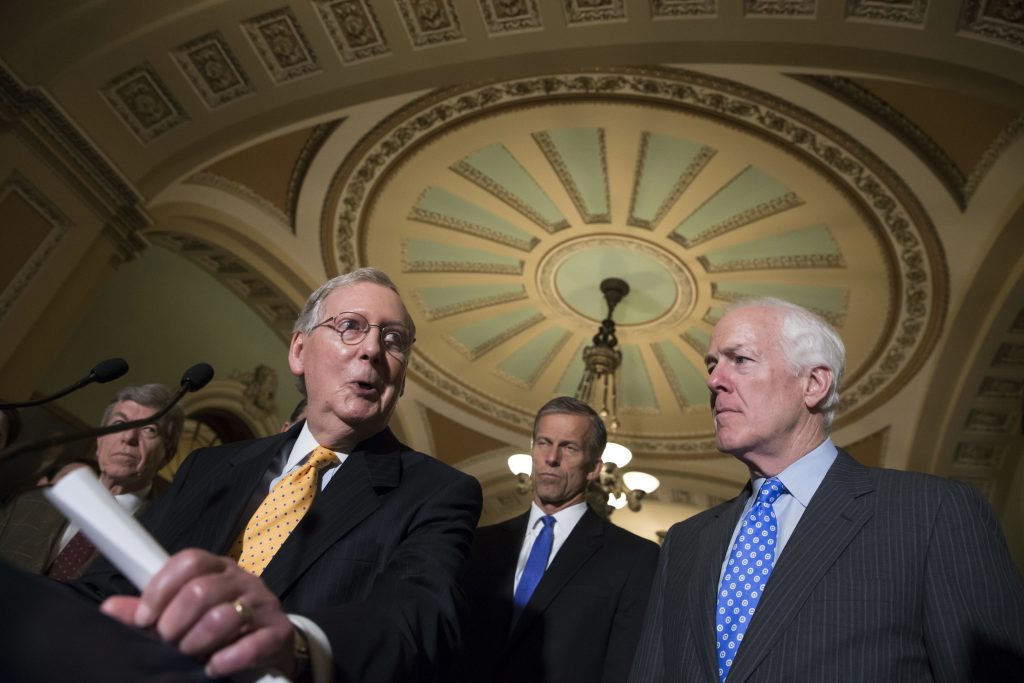 The Senate on Tuesday blocked Republicans’ plan to partially fund President Barack Obama’s request for funding to tackle the Zika virus and attach it to other items Democrats dismissed as partisan, setting off a bitter round of sniping ahead of the July 4 recess.

Senate Majority Whip John Cornyn of Texas said Democrats, not Republicans, will pay a political price for blocking the $1.1 billion Zika funding package, which was attached to a funding bill for veterans and military construction.

“The first [media] picture of a woman, an American woman, bearing a child with a birth defect caused by this virus will be on them,” Cornyn told reporters Monday afternoon. “We shouldn’t risk it.”

The measure was blocked on a 52–48 vote, falling short of the 60-vote threshold needed to advance it. Democratic leaders called for a new round of negotiations to produce a bipartisan bill.

Shortly before the vote, the Florida Department of Health announced the first Zika-linked case in the state of a baby born with microcephaly, to a Haitian woman who contracted the virus abroad.

Senate Majority Leader Mitch McConnell, a Kentucky Republican, said the measure was the senators’ last chance to provide Zika funding “for weeks” because the chamber will be off next week for the July 4 holiday.

But Sen. Chuck Schumer of New York, the third-ranking Democrat, said the package was “a bill designed to fail.”

Democrats say the package is filled with “poison pills,” forcing them to vote against the Republican-written plan.

Among the items Democrats objected to were; a suspension of Clean Water Act rules on use of some pesticides without EPA approval; a funding level for veterans affairs that was $500 million below what the Senate passed; and the deletion of a provision sought by Democrats to stop flying the Confederate battle flag at veterans’ cemeteries. Democrats outlined their concerns in a letter to McConnell sent Tuesday.

Minority Leader Harry Reid of Nevada said Democrats had “no choice” but to oppose the bill, and the White House had said Obama would veto the measure if it reached his desk.

Reid also said it would set a bad precedent if funding for emergencies required cutting federal spending elsewhere. Typically, emergency spending is paid for by borrowing.

Cornyn said Democrats “want to spend $1.9 billion in emergency spending with no offsets.” He added, “Busting the budget caps is more important to them than the public health and women who might suffer from birth defects.”

“This is their shot. I think there is going to be a heavy price to pay when this virus hits our shore and women start having babies with terrible birth defects,” Cornyn said. “I wouldn’t want to be in their position.”

Obama requested $1.9 billion to fight the virus in February, but Republicans didn’t act for months and ultimately balked at the price tag. A $1.1 billion emergency plan passed the Senate as an amendment to a spending bill last month on a 68–30 vote, with most Republicans, including Cornyn, voting against it because it would add to the deficit.

Democrats have been pounding Republicans for failing to act for months, particularly in the key battleground state of Florida.

Sen. Marco Rubio, who changed his mind and decided to seek re-election this year, has been the most visible Republican pushing for Congress to act. He now faces the unwelcome prospect of going home for another recess and explaining why his party was unable to enact any funding yet again.

“I’m frustrated that we haven’t dealt with this, quickly, effectively, weeks ago, before the middle of the summer, middle of mosquito season,” Rubio told reporters Monday.

Rubio said he had hoped it would be the full $1.9 billion on its own — as the president requested.

“I wish it didn’t have all these strings attached, because it would have been easier to pass a long time ago, but not doing anything is no longer an option,” he said.