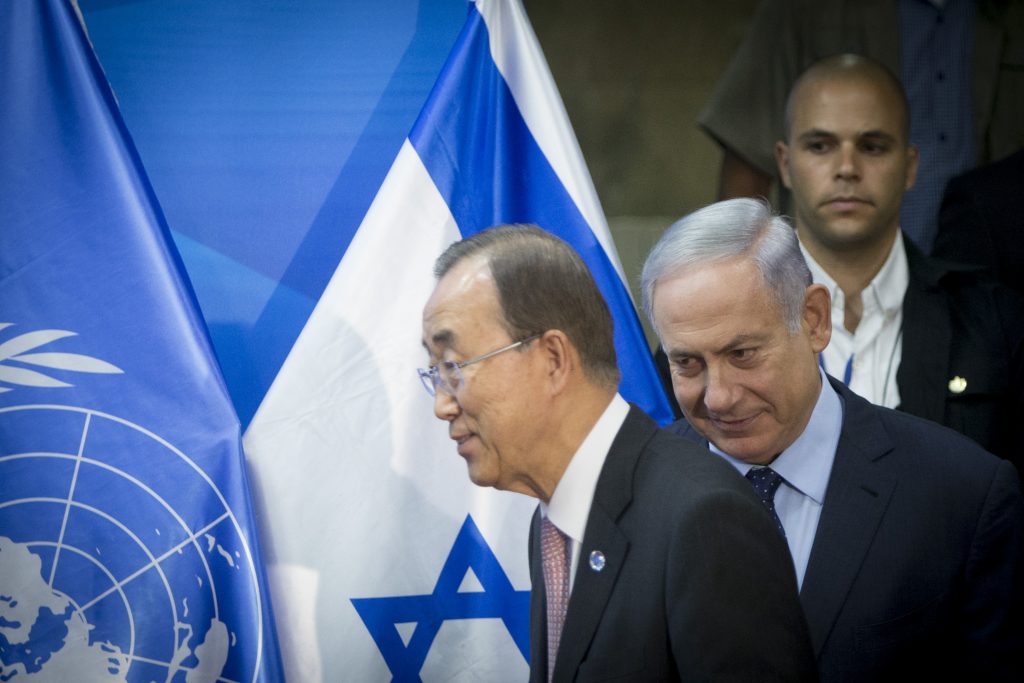 The U.N. chief on Tuesday criticized Israel’s blockade of Gaza, which was left intact by the reconciliation pact with Turkey, while granting Ankara greater access for humanitarian efforts.

In a visit to the region, which included a stop at a Gaza school, Ban Ki-moon bemoaned the plight of Gazans, saying that “the closure of Gaza suffocates its people, stifles its economy and impedes reconstruction efforts.”

“It’s a collective punishment for which there must be accountability,” the secretary-general added.

Ban was also on the receiving end of criticism, after the pleasantries of his meeting with President Reuven Rivlin on Monday.

Israeli Prime Minister Binyamin Netanyahu reminded Ban that “when you came to Israel in 2013 you said that Israel and the Israeli people face some bias.

“That’s an understatement. But you also said that Israel must be treated equally at the U.N. I appreciate your candor and this clear moral stance. It was exemplified in your efforts to secure the final Palmer report which was very important for Israel…

“Regrettably, the goal of treating Israel fairly remains unfulfilled across a wide spectrum of U.N. activities and U.N. forums. Your visit here comes as the U.N. Human Rights Council is meeting. As it always does, the Council will condemn Israel, a country that does more to promote and protect human rights and liberal values than any other in the blood-soaked Middle East.

Two Israeli lawmakers sent a letter to the U.N. chief on Tuesday echoing those sentiments.

Knesset Foreign Affairs and Defense Committee members MKs Michael Oren (Kulanu) and Omer Bar-Lev (Zionist Camp) wrote in a letter to Ban that much has to be done to earn the confidence of Israelis in the U.N. They cited a Pew Research poll from 2013 showing that 70 percent of Israelis have an unfavorable opinion of the U.N.

The MKs called on Ban to tell his successor, who has not been announced yet, “to eliminate the bias and discrimination that has poisoned the relationship [between the U.N. and Israel] and restore faith in this most valuable of international bodies.”