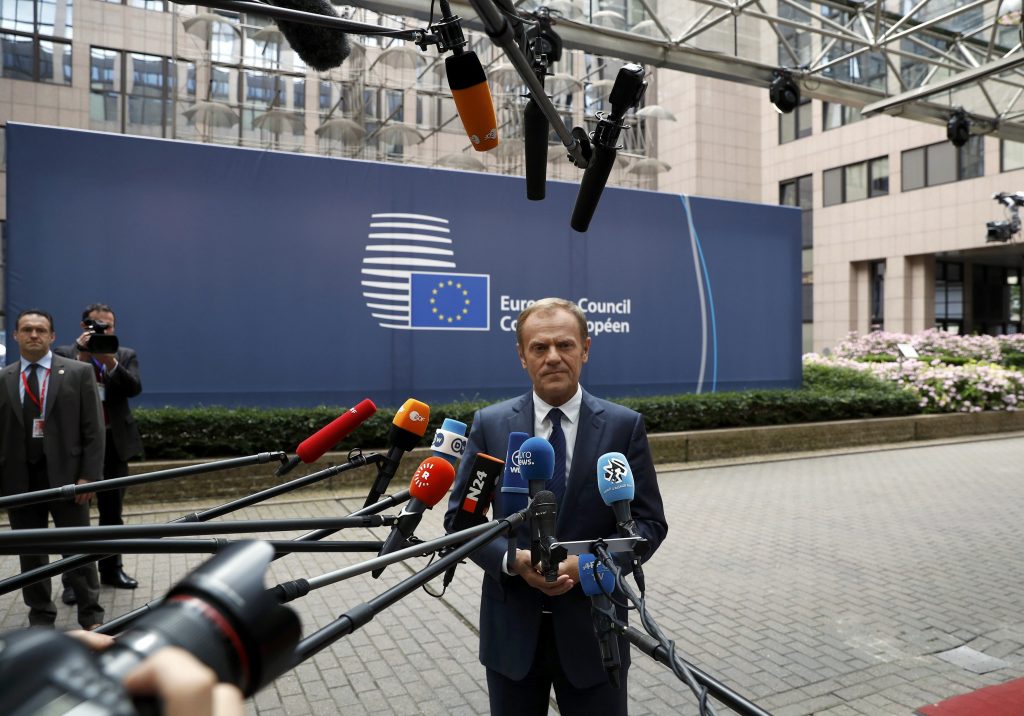 EU President Donald Tusk says holding off on a meeting of EU leaders on the bloc’s future until September will avoid rushing into reform after the British decided to leave in a referendum vote.

The meeting will be in Slovakia, which will hold the EU presidency at that time. Britain will not be invited.

“We need a few weeks to prepare this process and maybe the best place will be Bratislava,” said Tusk.

Speaking in Brussels, he said the union would, however, not be able to begin negotiations on the exit until the British government has formally declared its intention to go. That is “the only legal way,” he said.

Earlier, the EU Commission chief said he is banning any informal and secretive negotiations on a British exit until the nation formally notifies it wants to leave the European Union in the wake of last week’s referendum vote.

Jean-Claude Juncker, President of the European Commission, told a special session of parliament that, “I want the U.K. to clarify its position, not today, not tomorrow at 9 a.m., but soon. We cannot allow ourselves to remain in a prolonged period of uncertainty.”

Britain has indicated it might not make official notification for several months, perhaps until October, leaving the 27 other nations in political limbo. Yet Juncker refuses to start talks with London before that.

He said there will be no secret meetings between U.K., national governments and commissioners in the corridors. “I ban that,” Juncker said.

Cameron arrived in Brussels on Tuesday and went into a meeting with Juncker without exchanging any words in front of the media. He will also meet other European counterparts one-on-one before addressing them all at what promises to be a frosty dinner to discuss Brexit.

EU lawmakers have made clear their hope he will trigger the exit process at the dinner, but an EU official said on Monday that was unrealistic given the political chaos in London, where both Cameron’s party and opposition Labour are deeply divided.

The ruling Conservative Party in parliament is split into pro- and anti-EU camps, and the leader of the opposition Labour Party, Jeremy Corbyn, faces a no-confidence vote on Tuesday from parliamentarians who accuse him of lukewarm support for the EU.

“The 27 other members of the EU should not wait for the disorientated Tory (Conservative) party to get its act together,” former Belgian PM Guy Verhofstandt, leader of the Alliance of Liberals and Democrats for Europe, said on Tuesday, denouncing what he called the “lies” of the Leave campaign.

For Britain, the outlook is bleak. Fitch joined other major credit ratings agencies in downgrading its sovereign debt on Monday, making the promises by Leave campaigners that Britain’s economy would be stronger outside the EU appear empty.

“We are absolutely going to have to provide fiscal security to people; we are going to have to show the country and the world that the government can live within its means,” Chancellor George Osborne, who, like Cameron, campaigned to stay in the EU, told BBC radio.

Asked if that meant tax rises and spending cuts, he said: “Yes, absolutely.”

After Cameron has addressed EU leaders on Tuesday evening, they will meet the next day to discuss Brexit without him.