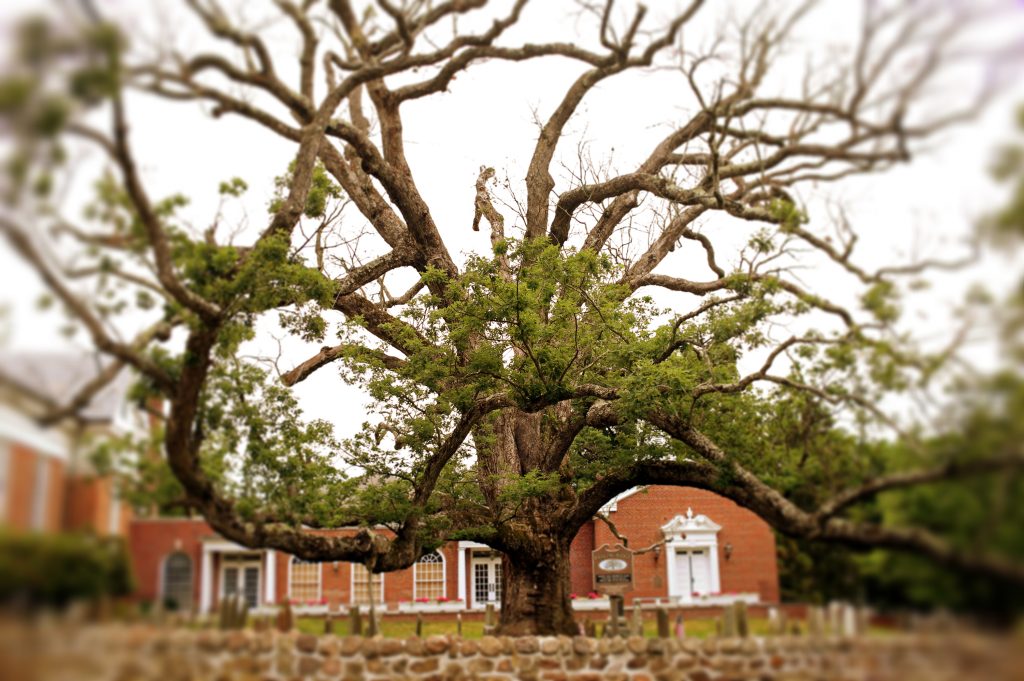 Well before Columbus sailed to the New World and even before Gutenberg invented the printing press, there grew a great oak tree in a land that would one day be called New Jersey.

The oak was already old when farmers built a church beside it in 1717. And when the people came and kept coming, a town called Basking Ridge was built around the church that was built beside the tree.

Town and tree would always be inseparable, or so the people thought.

In the 1700s, George Washington’s troops drilled on the village green in view of the ancient oak, and the general picnicked beneath it with his friend the Marquis de Lafayette. On his way to the Battle of Yorktown, Gen. Jean-Baptiste Rochambeau marched 5,500 French soldiers past the oak and into history — and soon after the tree shaded the graves of 35 veterans.

Through war and natural disaster and a thousand storms or more, the tree survived. In the 1920s, four men scooped out part of its rotted trunk and then stood inside it, amazed at its girth, before pouring concrete into the cavity to save the oak.

And when drought parched the community in the 1970s, residents didn’t mind when volunteer firefighters slaked the oak’s thirst. “And if at any time, we have another drought and people are told they can’t water their lawns, they can’t fill their swimming pools, there will always be water for this tree,” a town historian said.

But what if, eventually, all the tender loving care isn’t enough? A couple of springs ago, people noticed that the tree was less green in the top of its canopy and its gray denuded branches seemed to scold the sky. They worried over what was happening to their beloved oak — the oldest white oak in the country and perhaps the world. Scientists were called in, plans were offered up, and everyone waited to see what the next spring would bring.

When the tree didn’t green last month, when even more of its upper branches stayed bare, other experts were consulted. They tested the soil, probed the roots, checked for beetles and disease. Jason Grabosky, an ecologist at Rutgers, inspected the tree in mid-June and declared it, after 600 years, to be “in a spiral of decline.”

Although Grabosky gave no timeline, residents are preparing for the tree’s demise as for a family member.

The tree still stands close to 100 feet tall, and its branches extend more than 130 feet side to side. It anchors the north end of the center of Basking Ridge, a postcard-perfect town about 40 miles west of New York City. It’s a place where no one pays for parking, where locals are used to greeting tourists who’ve come from all over the country to marvel at the stamina of the town’s most famous occupant.

But the Holy Oak, as Basking Ridge’s tree is often called, kept going. It was struck more than once by lightning. It was blasted by Hurricanes Diane, Donna and Dora, then Floyd, Irene and Sandy. Through tornadoes and derechos, blizzards and floods, it buckled and bent. It swayed and swooned. But it never succumbed.

The tree’s sudden failure to thrive is a mystery. Some think the reason could simply be old age. White oaks usually live between 200 and 300 years. The Basking Ridge oak has surpassed that by several centuries.

“Because trees live longer, we tend to view them as timeless,” U.S. Geological Survey ecologist Craig Allen said. “You can feel this sense of endurance. In human terms, we would call it wisdom.”

Bill Emmitt, the trustee in charge of the tree, hopes he won’t have to let go.

“Based on the advice we’ve received,” he said, “there’s enough life in the tree, and the upper part of the tree is strong, so that even though it doesn’t have leaves on it, [the arborists] think with tender loving care it can continue” — at least “for the foreseeable future.”

If not, the tree might need to come down as soon as next year.

With word of the tree’s ill health spreading, a dozen calls have come from people who bought saplings a decade ago. Planted in yards around New Jersey, those babies are five to 10 feet tall now, and their owners have offered them up to take the place of the “great one,” if it comes to that.

“There is a life eternal,” Emmitt said, “and all these new trees are a testament to that.”