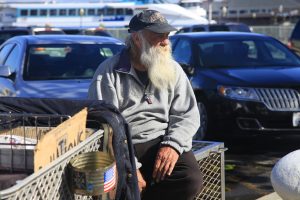 More than 70 media organizations in San Francisco plan to saturate publications across all media formats this week with news stories about an issue that has stumped politicians and residents for decades: the city’s homeless.

Homelessness has defined San Francisco for generations, with panhandlers and dirty sidewalks as much a part of the scenery as the Golden Gate Bridge or Victorian homes on a hillside. But with thousands of newcomers and tensions exacerbated by a shortage of affordable housing, complaints about those who live on the streets are growing.

Media outlets will concentrate their coverage on Wednesday but plan stories throughout the week in a push to inform residents and spur action. The San Francisco Chronicle, one of the city’s two daily newspapers, has lined up a week of coverage capped by a front-page editorial Sunday.

“We have expertise, and we have resources,” said Audrey Cooper, the Chronicle’s editor-in-chief who created the idea for the “SF Homeless Project.” “We want things to get better, too, and we want people to make smarter decisions.”

Media companies in Southern California and Seattle also plan to participate in the media blitz.

Outlets say they will share content in hopes the collaboration inspires residents and policymakers to take a hard look at solutions.

The issue has come to a head in San Francisco, where it’s common to see people sleeping in doorways or huddled in transit stations.

The founder of a technology startup said in an open letter to Mayor Ed Lee recently that he “shouldn’t have to see the pain, struggle, and despair of homeless people” on his way to work.

An initiative on the fall ballot would allow authorities to tear down encampments after giving residents 24 hours’ notice and offering shelter.

She has received calls from people secretly living out of their cars, too ashamed to share their stories. Their message is: “I want you to know it’s not just drunk, mentally ill people who are living on the streets,” Kernan said.

The Chronicle’s Cooper said reporters will analyze what it might cost to house everyone who needs a place to live or provide mental-health treatment to people who might not want it. She said reaction has been positive but that some homeless advocates fear the scrutiny will unfairly target people for being poor.

Dr. Damon Francis, interim director of Alameda County’s Health Care for the Homeless Program, said he hopes coverage will explore the “tremendous diversity” of people without homes and the forces behind modern homelessness.

“It’s really very hard to solve with local budgets, and I think that’s the real challenge of local journalism,” he said. “We do need those federal dollars back to change these rental markets.”

An estimated 3,500 people sleep on the streets of San Francisco each night, with thousands more in shelters, cars, motels or with friends and family.

One of them is Rasheedah Mahir, a 35-year-old bicycle mechanic who makes quesadillas by hand on a gas burner set up on the sidewalk in the Mission District.

Mahir has been on the streets for four months, since getting evicted from an apartment where she lived for years.

“I don’t know,” she said about media blitz. “The homeless. I mean, the issue is forever.”