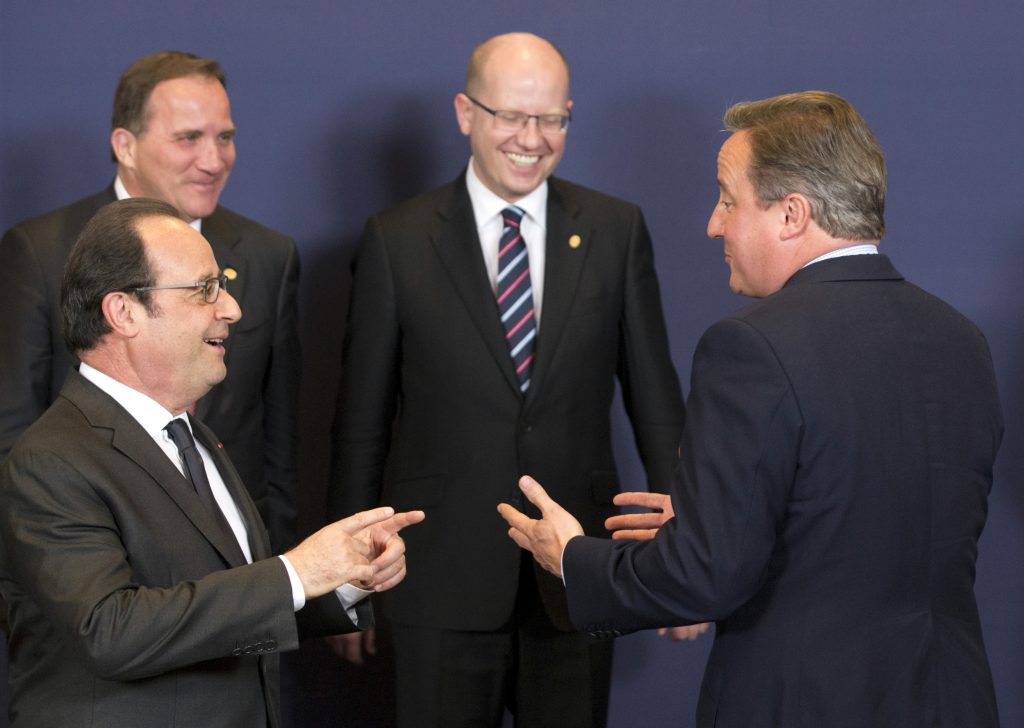 British Prime Minister David Cameron fended off anger Tuesday from other European Union leaders at an unprecedented summit charged with uncertainty about the bloc’s future without Britain. As leader after leader rejected Cameron’s pleas for favorable conditions for Britain once it leaves, he frustrated them by refusing to initiate the divorce proceedings immediately.

At what may be his last EU gathering, Cameron sat at one end of the oval summit table in blue shirt sleeves, arguing for the best possible exit conditions for his island nation. Around the table, other EU leaders refused to negotiate, seemingly eager to kick Britain out as soon as possible to avoid further political and economic turmoil after the shock and emotion of the British vote to leave last week.

“Europe is ready to start the divorce process, even today, without any enthusiasm, as you can imagine,” said summit host, EU President Donald Tusk.

Outside the Council room, markets were still in upheaval as they sought to recover from the unexpected exit vote, which will rob the EU of its biggest military power, its second-largest economy and a diplomatic giant.

In a special session of the EU parliament hours earlier, there had been cries of campaign “lies” from legislators regretting the loss of Britain, and taunting by “leave” campaigner Nigel Farage.

“You as a political project are in denial,” declared Farage, leader of the anti-EU U.K. Independence Party. “When I came here 17 years ago and said I wanted to lead a campaign to get Britain to leave the European Union, you all laughed at me. Well, you’re not laughing now, are you?”

When the traditional family photo of the leaders at the summit was taken, few were smiling.

Realizing the threat of a rift further tearing at the unity of a bloc of more than 500 million people, Tusk said he was planning a special meeting of the EU leaders minus Cameron in Slovakia in September to chart a way ahead. German Chancellor Angela Merkel pledged to use “all her strength” to prevent the EU from drifting apart.

Cameron was facing calls to start the exit talks as soon as possible, but he has said such negotiations should not be launched before he resigns in October, and a new British prime minister can lead the talks.

“Britain will be leaving the European Union but I want that process to be as constructive as possible,” Cameron said.

However, Britain has for decades been an obstructive partner as the EU sought more unity, so Cameron’s counterparts put little trust in those words.

“As fast as possible, the U.K. must submit its notification to leave the European Union,” French President Francois Hollande said.

The leaders of Britain’s “leave” campaign hope the nation can still enjoy many perks of the EU internal market for business, while being able to deny EU citizens entry to the U.K. to address concerns about unlimited EU immigration.

Merkel, head of the EU’s biggest economy, made clear that isn’t an option.

“Whoever wants to leave this family cannot expect to have no more obligations but to keep privileges,” she said. “We will ensure that the negotiations are not carried out with the principle of cherry-picking.”

At the same time, unshackled from Britain, the other EU members need to plot a common way ahead. Yet differences between founding nations in the west and newer members in the east are increasingly tough to reconcile.

“If the EU cannot solve the migration situation, then the challenges we experienced now in the case of the United Kingdom will grow,” he said.

Central European nations led by Hungary refuse to accept the imposition of EU refugee quotas. Further north, Austria, Germany, Sweden and Denmark have all tightened border controls in response to the arrival of more than 1 million migrants last year. Their entry overwhelmed Greece and Italy.

First, though, the EU needs to get rid of Britain.

EU Commission President Jean-Claude Juncker and other European leaders insist they won’t begin any talks until Britain invokes the Article 50 of the EU’s Treaty of Lisbon, which sets in motion a two-year process to split from the group that had been designed to unify Europe after the horrors of World War II.

“I want the U.K. to clarify its position. Not today, not tomorrow at 9 a.m., but soon,” Juncker told lawmakers. “We cannot allow ourselves to remain in a prolonged period of uncertainty.”

Juncker said he had banned his policy commissioners from holding any secret talks with Britain on its future until London triggers the exit clause.

“No notification, no negotiation,” he said to resounding applause.

The reaction to Britain’s vote to exit the EU was at times acrimonious. Farage was booed and jeered when he urged Europe to give Britain a good trade deal when it leaves, saying jobs in Germany’s auto sector might be at stake if it doesn’t.

In a speech interrupted several times, Farage warned: “The U.K. will not be the last member state to leave the European Union.”

Bearing out his words, French far-right leader Marine Le Pen called the British vote “an extraordinary victory for democracy — a slap for a European system based more and more on fear, blackmail and lies.”

Despite such attention-grabbing comments, it was Scottish EU Parliament member Alyn Smith who received a standing ovation with his emotional speech noting that a majority of Scots voted to stay in the EU.

“There are a lot of things to be negotiated and we will need cool heads and warm hearts, but please remember this: Scotland did not let you down,” Smith said. “Please, I beg you, cher colleagues, do not let Scotland down now.”