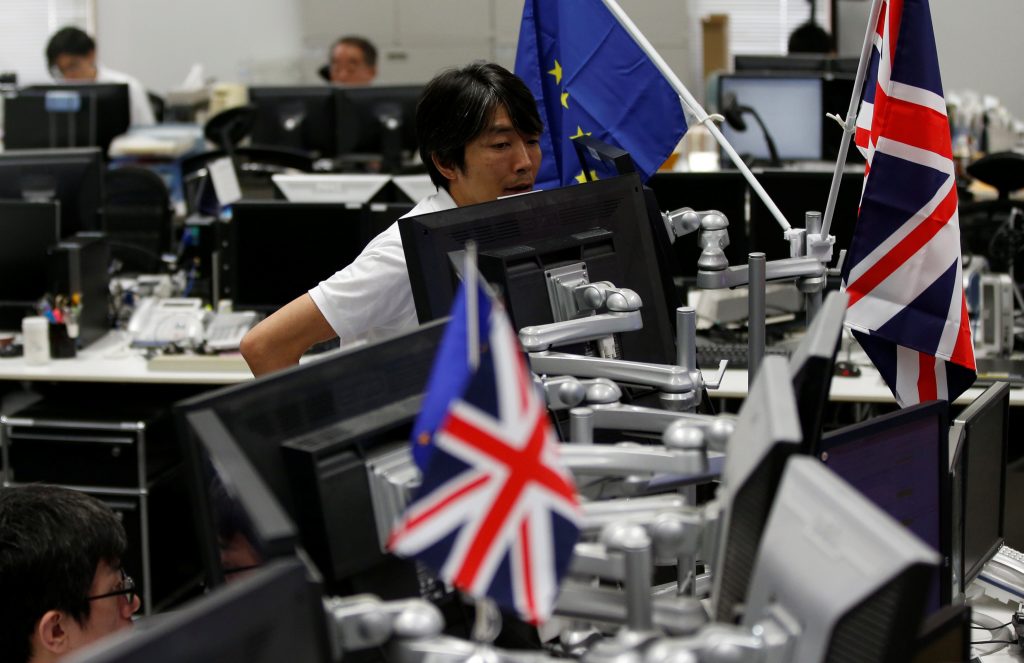 Asian stocks fell and the British pound tumbled more than 2 percent on Monday as markets grappled with deep uncertainty sparked by Britain’s decision to leave the European Union.

Sentiment remained weak even as the volatility seen earlier in the session receded, but it was a far cry from the turmoil seen on Friday when the shock of Britain’s exit vote drove global stocks to their biggest decline in nearly five years.

“Things are so uncertain that investors still do not have a clear idea how much of their risk assets they need to sell,” said Hiroko Iwaki, senior foreign bond strategist at Mizuho Securities. “But it is safe to assume investors are not yet done with all the selling they need to. I wouldn’t be surprised to see another 10 percent fall in share prices,” she added.

Among many questions Brexit triggered are just how much U.K. and European economies will slow, how the EU and Britain will negotiate their new relationship, and what European leaders will do to shore up the crumbling union.

Financial shares led declines in Australia and Hong Kong, with the financial sector seen among the worst hit by Brexit if the City of London’s investment products and services lose their prized “EU passports” allowing them access to the single market.

“We think Brexit could just be the first surprise in a recalibration of the world away from globalization towards more inward-looking policymaking,” Ajay Singh Kapur, equity strategist at Bank of America Merrill Lynch in Hong Kong, wrote in a note.

“Brexit has now possibly opened up more uncertainty about the European Union project, and the already beaten down Asian and emerging markets equity markets could receive asset allocation flows from Europe,” he added.

Chinese shares advanced, with the CSI 300 index and the Shanghai Composite both up about 0.8 percent.

Japan’s Nikkei gained 1.7 percent, a partial rebound after Friday’s hefty 7.9 percent fall. Japanese stocks were helped by stronger warnings from Japanese officials that they may intervene in currency markets to stabilise the yen.

The dollar index, which tracks the greenback against six major peers, advanced 0.8 percent to 96.147, remaining near its three-month high of 96.703 touched on Friday.

For developing economies, “the main risk is that the U.S. dollar strengthens from here and remains strong, which would sap emerging markets of liquidity via the trade and capital accounts, and hurt the pricing environment,” Citi Strategist Markus Rosgen wrote in a note. “A stronger U.S. dollar would also bring back fears of potential emerging market currency devaluations, which would not help the asset class.”

The euro also came under further pressure, falling 0.9 percent against the dollar, amid investor concern that Brexit could feed the anti-establishment mood in Europe and even stoke talk of disintegration of the union.

“[There will be] sell-off in the euro as talk of other exit referenda builds,” said Jerome Booth, chairman of New Sparta Asset Management in London.

“This sell-off will be more profound and long-lasting and will be not just against the dollar and yen but also against the pound. It will also raise fears of significant loss of value for holders of Euro-zone government bonds.”

On Monday the euro’s weakness helped to push the Chinese yuan to its weakest level against the dollar since December 2010. It fell to 6.6390 per dollar after opening at 6.6360 per dollar, compared with the 5½-year low midpoint level of 6.6375 set by the central bank, and touching an intraday low of 6.6469.

But in a sign Britain’s shock decision to leave the European Union may be encouraging Europeans to seek the safety of the status quo, support for Spain’s conservative People’s Party (PP) surged in Sunday’s general election.

Oil prices also felt the sting of risk aversion, although losses narrowed from earlier in the day. International benchmark Brent futures slipped 0.2 percent to $48.33 per barrel, while U.S. crude slid 0.5 percent to $47.41.