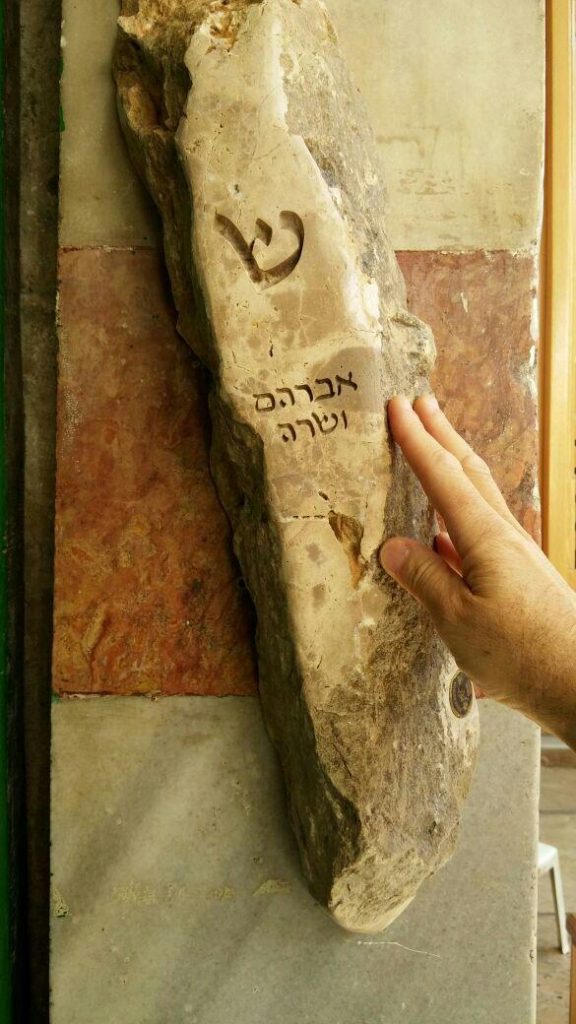 New mezuzahs were placed on the entrance to Mearas Hamachpelah Sunday after the mezuzah that had been at the entrance previously was ripped off and destroyed by Arab thugs. Police and IDF soldiers are investigating the case, but have made no progress yet.

Actually, two mezuzos were installed Sunday – the replacement one at the entrance, as well as one that had been previously scheduled for installation at the entrance to ulam Avraham. The first mezuzah is a large one, made out of stone quarried in the area of Shechem, the first place Avraham Avinu came to in the Land of Israel, while the second was quarried in the area of Beit El, where Yaakov had his famous dream of angels ascending and descending a Heavenly ladder.

The installations were made by Rabbi Dov Lior, Rabbi of Chevron. The stone, said Rabbi Lior, made it unlikely that a repetition of the episode on Shabbos would be repeated. On Friday, with no Jews present due to rules that allow only Muslims into Mearas Hamachpelah on Fridays during Ramadan, Arabs apparently stole an expensive mezuzah case (with a mezuzah inside) from the doorposts of one of the entrances to the compound. The theft was discovered on Shabbos, when groups of Jews came to daven at the site.

In addition, the thieves broke into a storeroom where plants that have yet to be planted were stored, and stole dozens of them as well. The plants were valued in the thousands of shekels.

Mearas Hamachpelah has been split between Jews and Muslims since 1994, when Dr. Baruch Goldstein shot and killed over two dozen Arabs at the site. For Jewish and Muslim holidays, the site is generally turned over to each group in turn. In the wake of the theft, members of the Chevron Jewish community demanded that the special permit granting Muslims full control of the site on Ramadan Fridays be canceled.

Community spokesperson Noam Arnon said Sunday that this was “not the first time that Arabs used their privilege to cause damage to Jewish holy items. This has happened in the past, and we then also demanded that steps be taken to prevent repetition of these acts. Unfortunately the Muslims have once again shown that they do not understand the term ‘religious tolerance,’ and what it means to respect holy objects. We demand that their special privileges be canceled, until they begin to understand the principal of mutual respect.

“We demand that they return the mezuzah,” added Arnon. “This is a very expensive mezuzah, and one that has deep spiritual and sentimental meaning. We also demand that the guilty parties apologize. It took great effort to calm members of the Jewish community, many of whom wanted to take retaliatory action. But we ensured that they did not do so, as it is the state’s responsibility to take action to prevent future instances of this behavior, and to ensure return of the mezuzah.”