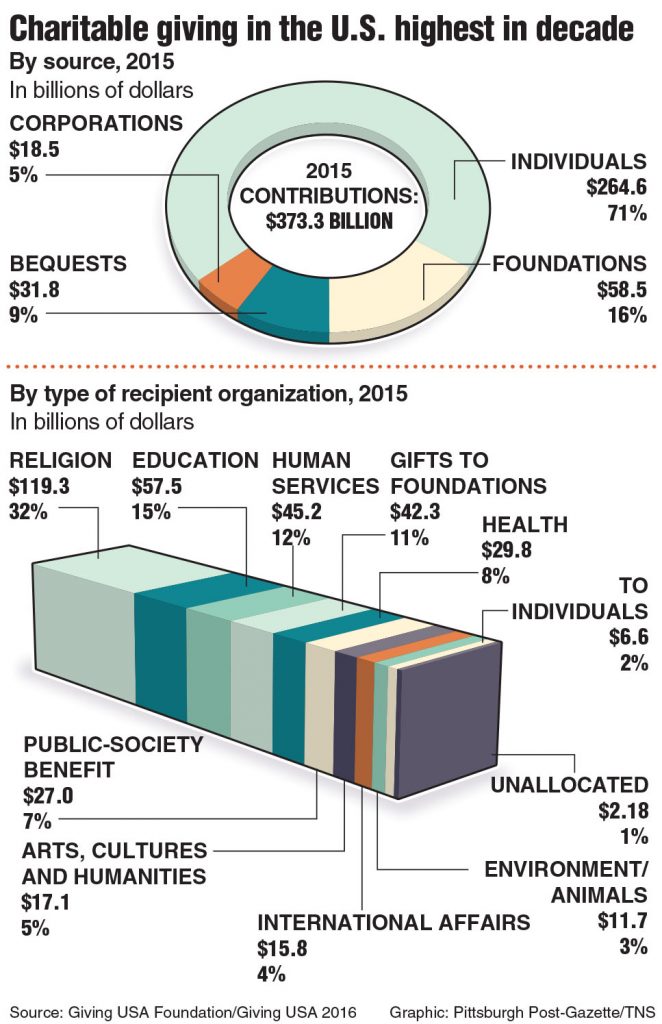 Charitable giving nationwide rose by 4.1 percent last year to a record total of $373.3 billion, bolstered by an ongoing national economic recovery and stabilizing household finances, according to an annual report by the Giving USA Foundation.

Donations in 2015 surpassed pre-recession levels for the second year in a row, the foundation said.

“The last two years represent the highest and second-highest totals for giving … in the past 10 years, adjusted for inflation,” said Amir Pasic, the dean of the Indiana University Lilly Family School of Philanthropy in Indianapolis, which provided research for the report.

Religious organizations attracted close to one-third of total donations, or $119.3 billion. While gifts to religious groups have declined as an overall share of total giving in recent decades, last year’s amount was about the same percentage as in 2014, Giving USA said.

The next highest recipients were education, human services and foundations.

“It’s heartening that people really do want to make a difference, and they’re supporting causes that matter to them,” said W. Keith Curtis, chair of the foundation. “Americans are embracing philanthropy at a higher level than ever before.”

Individuals generated 71 percent of all donations, with big gifts from wealthy donors accounting for part of that total.

Among the big donations last year, according to a separate report from The Chronicle of Philanthropy, were $100 million from Roberta Buffett Elliott, a sister of financier Warren Buffett, to Northwestern University to establish the Buffett Institute for Global Studies; and $75 million from Facebook co-founder Mark Zuckerberg and his wife, Priscilla Chan, to the San Francisco General Hospital Foundation to support an acute-care and trauma center.

Bequests accounted for 9 percent of all giving in 2015 and among the largest, according to Philanthropy, was $605 million from theater chain founder John Santikos, who died in 2014, to the San Antonio Area Foundation.

Patrick Rooney, associate dean for academic affairs and research at Indiana University, said while such donations do impact overall giving, “Americans’ collective generosity would still be enormous even without those jaw-dropping gifts.”

“Philanthropy is quite democratic and always has been — more people give than vote in the U.S. — and $20, $10 and $1 do make a cumulative difference,” he said.