National At Age 89, the Spirit of St. Louis Gives Up Some Long-Held Secrets
National 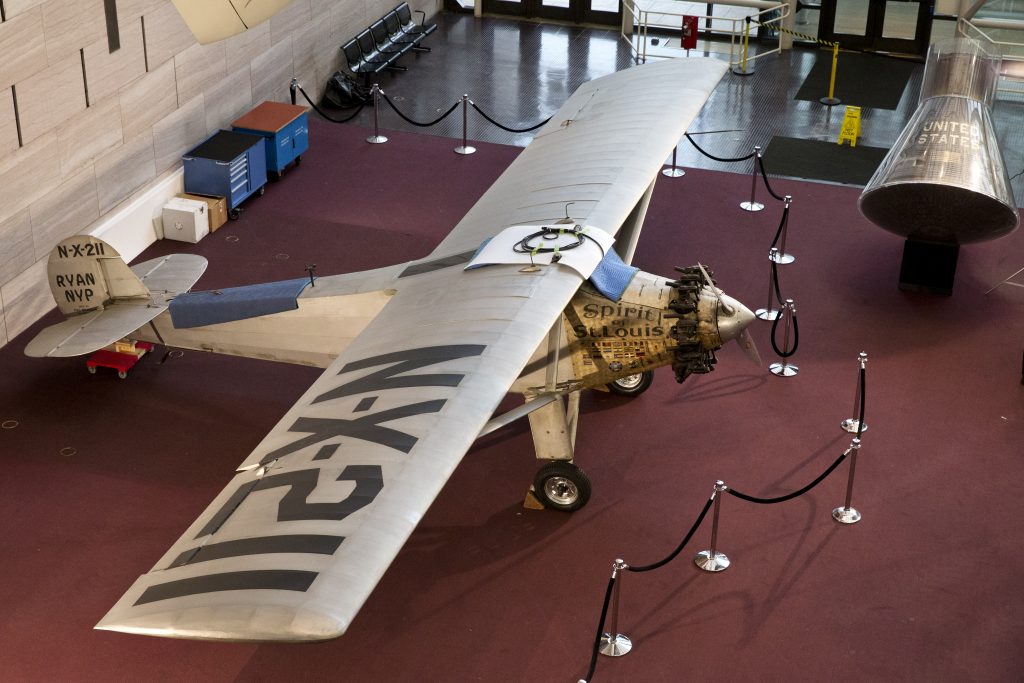 In the fall of 1975, as the Smithsonian Institution was preparing to open its new National Air and Space Museum, two airplane restorers were finishing up work on Charles Lindbergh’s legendary Spirit of St. Louis.

The single-engine aircraft, in which Lindbergh had flown nonstop from New York to Paris in 1927, was world famous, and John Cusack and Pat Williams were proud of the care they had taken with the plane.

So proud that they took a small piece of lined paper and wrote a note to posterity:

“Cleaned and repaired for display in the new National Air and Space Museum, September 1975.

They hid the note under the floorboard in the airplane’s cockpit.

And there it remained, undiscovered, until last year.

On July 1, the museum will unveil its restored “Milestones of Flight” gallery — the central exhibition space that houses the Spirit of St. Louis and other historic craft such as the Friendship 7 space capsule and the Bell X-1 rocket plane.

The unveiling also marks the 40th anniversary of the opening of the museum, July 1, 1976, the gala national bicentennial event for which Williams and Cusack were readying Lindbergh’s plane.

Forty years and 311 million visitors later, a new generation of experts preparing the aircraft for the renovated gallery discovered that the Spirit of St. Louis still held secrets.

Late on the night of Jan. 14-15, 2015, when the museum was closed, experts carefully lowered the 89-year-old airplane from the ceiling of the museum for the first time in 23 years. Conservators wanted to check the fuselage and engine for wear and tear, among other things.

The plane, in which Lindbergh had made the first solo crossing of the Atlantic, was constructed with cotton fabric and metal and had no front windshield — but it sported a periscope.

Lindbergh gave the plane to the Smithsonian in 1928, flying it from St. Louis to the old Bolling Field in southeast Washington. Escorted by motorcycle police, it was towed, partly disassembled, to the Smithsonian’s Arts and Industries Building on May 11.

It was displayed there until it was moved to the Air & Space museum 47 years later.

Once on the ground last year, the plane was studied by experts who made a startling new find: As workers were snaking a flexible borescope camera through inaccessible areas of the plane, they spotted a pair of pliers underneath the instrument panel.

They were “laying in the dust . . . basically laying on the fabric on the belly of the fuselage . . . [in] an area that’s very difficult to get to,” chief conservator Malcolm Collum said last week.

Later, Collum decided to try to retrieve the tool, and worked his hand into an opening in the footwell where the rudder controls are. “I was able to contort my arm . . . and got my two fingertips on these things.”

He said everyone assumed the pliers had belonged to Smithsonian employees who had worked on the plane over the years.

“I pulled these things out and blew the dust off them, and you could tell right away that these are old pliers,” he said. The handles were painted the same color as the plane’s oil, fuel tanks, and fuselage structure.

He said that they probably came from the Ryan airplane factory that built the plane and were part of an original tool kit that went with the aircraft.

“I was like a little schoolboy — ‘Look what I found!'” Collum said.

He said Lindbergh could have needed the pliers to tighten anything that might have come loose from the constant vibration of the engine during his 33-hour flight.

“The engine . . . was bolted directly on the steel tubular airframe,” he said. “Everything in there would be constantly vibrating and shaking.”

Collum thinks that Lindbergh may have dropped the pliers at some point during the flight and they slipped down into the crevice.

“It’s really not a historic discovery,” he said. “It’s just a fascinating little thing that popped up.”

But there was more.

An early tale was told that when crews were fueling the plane in the factory, a rubber hose was accidently dropped inside a 209-gallon tank and could not be retrieved, Collum said.

The story was that a hole had to be cut in the tank before the flight to get the hose out.

When the tank was examined last year, the patched hole was found.

In addition, Collum said historians have known that the airplane’s oil reservoir split open and began leaking during the flight. Upon examination, he found the place where the seven-inch split was later patched.

And there was one more discovery.

John Cusack was known for the powerful fingers he had developed stitching the tough fabric that made up the hide of old airplanes at the Smithsonian’s Paul E. Garber restoration and storage facility in Suitland, Maryland.

There, dozens of historic aircraft were brought to be preserved and repaired for the Smithsonian by a team of restorers.

It was tedious and time-consuming work. Many planes were tattered and weathered, but Cusack loved it.

He had become a security guard at the Smithsonian in 1964 after serving 21 years in the Navy, said his son, Dennis, last week. And he jumped when a job as a restorer opened up at Garber in 1969.

In the Navy, he had been a crewman on big Lockheed Constellation surveillance aircraft and was fascinated by aviation, said Colleen Mennucci, his daughter.

Cusack, who died in 2007 at the age of 81 and had lived in Lothian, Md., worked on many famous airplanes at Garber, including the B-29 Enola Gay that dropped an atomic bomb on Hiroshima.

But he preferred the older models that were made of wood and fabric.

And he was proud of his work, which he often signed in an inconspicuous spot when he was finished, Dennis Cusack said.

“He did it for the Northrop Flying Wing,” he said. “He would always sign his name and put the date and put shellac over top of it so it would stay for the next hundred years when somebody else does it again.”

Dennis Cusack said he was unaware of his father’s note on Lindbergh’s plane. “But it doesn’t surprise me,” he said.

“We were a very kind of rough and tough, close-knit crew,” said Karl Heinzel, who also worked on Lindbergh’s plane and retired from Garber in 2008 after 34 years there. Cusack retired in 1995.

“It was the coolest place in the world you could possibly work if you were an airplane nut,” he said. “It was just great.”

For his work on the Spirit of St. Louis, John Cusack received a citation from the Smithsonian, which included a small piece of the plane’s fabric covering.

As for Cusack’s co-signer, Patricia A. (Williams) Merchant, she is thought to be the first woman to restore airplanes at the facility.

She died in 2003 at age 65 in Cambridge, Maryland. She married the late Donald Merchant, a World War II veteran and pilot of antique airplanes, who was a top official at Garber.

They left the Smithsonian and moved to the Eastern Shore about 1978.

A picture of her working on the engine of a P-51 Mustang called Excalibur III appears in the Smithsonian’s 1976-77 annual report.

As she and Cusack finished their work on the Spirit of St. Louis in 1975 and penned their note, they were no doubt aware of the historical importance of the plane and moment.

And the note was their “way of leaving a calling card to the future that ‘We were here,'” Heinzel said.

The Spirit of St. Louis was raised back to the museum ceiling last July, but just before it went up, Collum made a final check through the cockpit.

He noticed that the plywood floorboard in front of the pilot’s seat was a little loose.

He lifted it up, felt around underneath, and pulled out a slip of paper. It was the note.

The cockpit of the Spirit of St. Louis is a hallowed place, he said. Cusack and Williams must have felt honored to have worked on it.

“It’s almost like a sacred space,” he said. “When you open that cockpit door, if you don’t get tingles on your back when you stick your head in there, it’s time to retire.”

Asked if he left a message there for future conservators, he said, “I did not.”