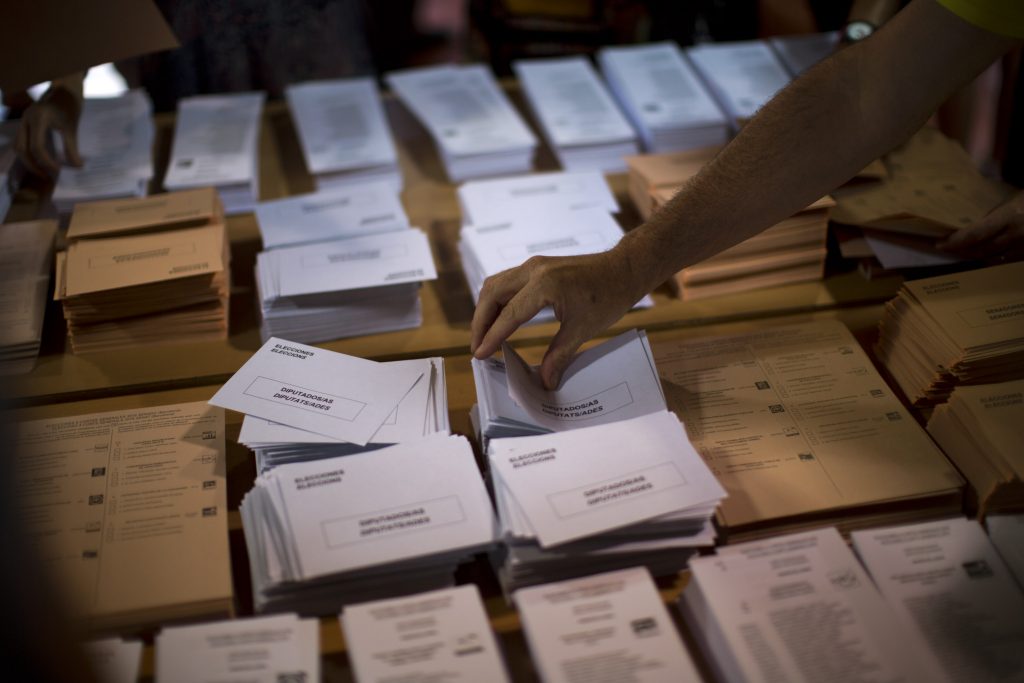 Spaniards were heading to the polls Sunday for an unprecedented repeat election that aims to break six months of political deadlock after a December ballot left the country without an elected government.

Opinion polls in recent weeks have unanimously predicted the new ballot will also fail to deliver enough votes for any one party to take power alone.

That would likely consign Spain to another period of protracted political negotiations — and, possibly, another election if there is no breakthrough.

Polls are prohibited in the last week of campaigning, but the most recent ones suggested the conservative Popular Party would win most votes but would again fall short of the parliamentary majority it had from 2011 to 2015. Popular Party leader Mariano Rajoy is hoping to be re-elected as prime minister.

According to the Spanish Constitution, a government must win a vote of confidence in Parliament with more than 50 percent of the possible 350 votes before taking office. If it misses that target, in a second vote 48 hours later it must get 50 percent of only the votes that are cast — a lower bar which allows parties to abstain from the vote and let a party into power in return for concessions.

A new round of political negotiations could be complicated by support for a new far-left alliance called Unidos Podemos (United We Can). That group, which includes radical leftist party Podemos along with communists and greens, is expected to finish second. That would push the moderate, center-left Socialist Party, which has traditionally alternated in power with the Popular Party, into third place and the business-friendly Ciudadanos (Citizens) into fourth.

The election in Spain comes four days after the United Kingdom voted in a referendum to leave the European Union. Antonio Barroso, a London-based analyst with the Teneo Intelligence political risk consultancy, said it is “unlikely” that decision would have much of an influence on the Spanish election.

“Nevertheless, the ongoing market turmoil fits well with the campaign message of … Rajoy, who has framed the election as a choice between economic stability and a radical left-wing government potentially led by Podemos and its allies,” Barroso wrote in an analysis Friday.

Public anger at high unemployment, cuts in government spending on cherished public services such as welfare and education, and unrelenting political corruption scandals have shaped the two-week election campaign.

After the December election, Rajoy couldn’t get enough support from rival parties to form either a minority government or a coalition.

The negotiations between parties dragged on for months as Pedro Sanchez, leader of the second-placed Socialists, also failed to clinch a deal that would let him govern.

Spain has never had a coalition government.

Pablo Iglesias, the radical college professor leader of Unidos Podemos, has repeatedly said he wants a pact with the Socialists in order to oust Rajoy. But a major sticking point for such a deal is Iglesias’s insistence on letting the powerful northeastern region of Catalonia stage an independence referendum — a possibility rejected outright by all the other main parties.

Ciudadanos is willing to talk to both the PP and the Socialists but want no deals with Unidos Podemos.

Besides tension over Catalonia, Spanish political debate has been dominated by an unemployment rate that has stood at more than 20 percent for nearly seven years and is the second highest in the EU after Greece, and an unrelenting stream of corruption scandals, mostly involving the Popular Party and the Socialists.