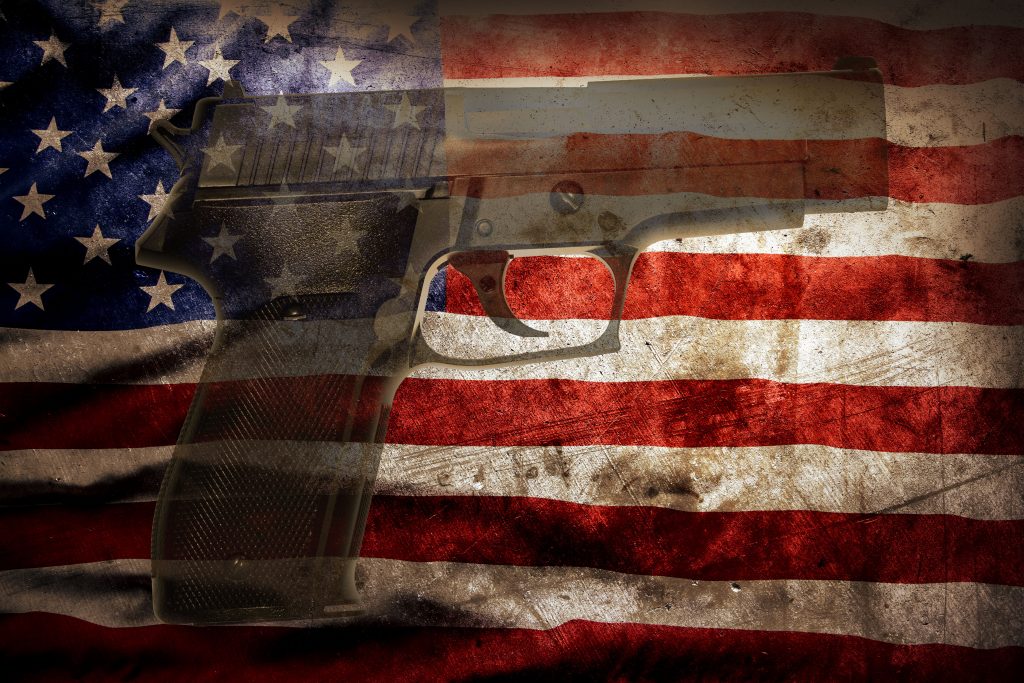 Even before the horrific attack in Orlando earlier this month, life in 21st century America had become intolerably, pervasively fearful. Our mad proliferation of guns, and the obscene loopholes that allow dangerous people to access them freely, are the most consistent engines of terror in our society today.

There is hardly any public space in America that has not been marred by gun violence. Going about our daily business, we can now imagine active shooters emerging anywhere: a church, a mall, a movie theater, a workplace. In many states, people have to be wary of innocent interactions, lest they offend someone who is armed, and the gun owner feels threatened and justified in “standing his ground.” All parents live with the daily stress of fearing for their children in this environment; the National Rifle Association prescribes armed guards at their schools, though it is painfully obvious this will do nothing to deter committed killers, as the gun lobby has made sure such people can easily obtain firepower.

Rule of law, a bedrock principle of democracy, is gravely endangered in the NRA’s America. The key feature of civil society, according to English philosopher John Locke — who inspired our founding fathers — is that citizens defer legal judgment to those who govern in our name and have superior resources; this is especially so for the most definitive judgment of all: death. Instead, we firmly, inexplicably trend the opposite direction, toward the chaos of a State of Nature where no one’s fate is secure.

Here, criminals, terrorists and malcontents are empowered by proliferating guns and loose gun laws, as are the people who would take it upon themselves to shoot the so-called “bad guys,” too often choosing the wrong enemy (Trayvon Martin comes to mind). This is an open invitation to vigilantism and all it entails. In the aftermath of Orlando, some rights groups called on members of their community to arm themselves to deal with threats, potential, imagined or real.

The NRA likes to say that guns are the solution to our fear; when we are armed, we need no longer fear. That is hardly the case: An armed society is rife with fear — and the ardent gun rights advocates are the most fearful of them all. Which is bad news because, among the irrational emotions that rack the human soul and provoke the greatest sins, fear is high on the list.

NRA CEO Wayne LaPierre is prime evidence of the chronic paranoia at work. His speeches are veritable litanies of things we must fear, and his creativity is impressive. In a major speech from 2014, La Pierre offered a lengthy tirade on electromagnetic pulses “triggered by a massive solar storm, or set off by a detonation of a nuclear device,” destroying the power grid and plunging the nation into a primitive state where “third world diseases would re-emerge.” He foresees a desperate scramble for survival in the chaos to come, and guns will give some the edge. But who wants to live in that world?

Apparently, ardent gun rights advocates do — and they have nearly gotten the world they warn of.

The NRA invited us to join its apocalyptic vision, and we have thus far complied. We have tolerated its radical agenda. Polls indicate that most Americans disapprove of NRA policies, like permitless carry and open carry, and their obstruction of universal background checks. But voters in most states have not pressed on, urging lawmakers to resist and reject the gun lobby’s outrageous demands.

The good news in all this is, we are hardly trying when it comes to gun violence. We are starting from a very low bar. Inexplicably, we don’t bar terror suspects from gun sales (the Senate failed to pass this reform last week). We don’t subject all gun buyers to background checks. We don’t put all people with mental illness in the background check system — some states hardly register this at all. Ten states allow permitless carry, whereby gun owners can exercise concealed carry without a permit and without required safety training. Then we despair over the amount of gun violence in this country, and the NRA tells us the mass slaughter could not be avoided — bad guys will get their hands on guns and mete out destruction.

That is simply not true. None of this is inevitable. It is a choice; one we make.

In armed America, we live in terror, but the means to diminish our absurd levels of gun violence are ready at hand — when voters across the country are finally willing to channel their democratic energies and press their lawmakers. Gun violence will not be eradicated; no one has ever promised that. But it can steadily be made more rare. This is a front in the war on terror we can win.