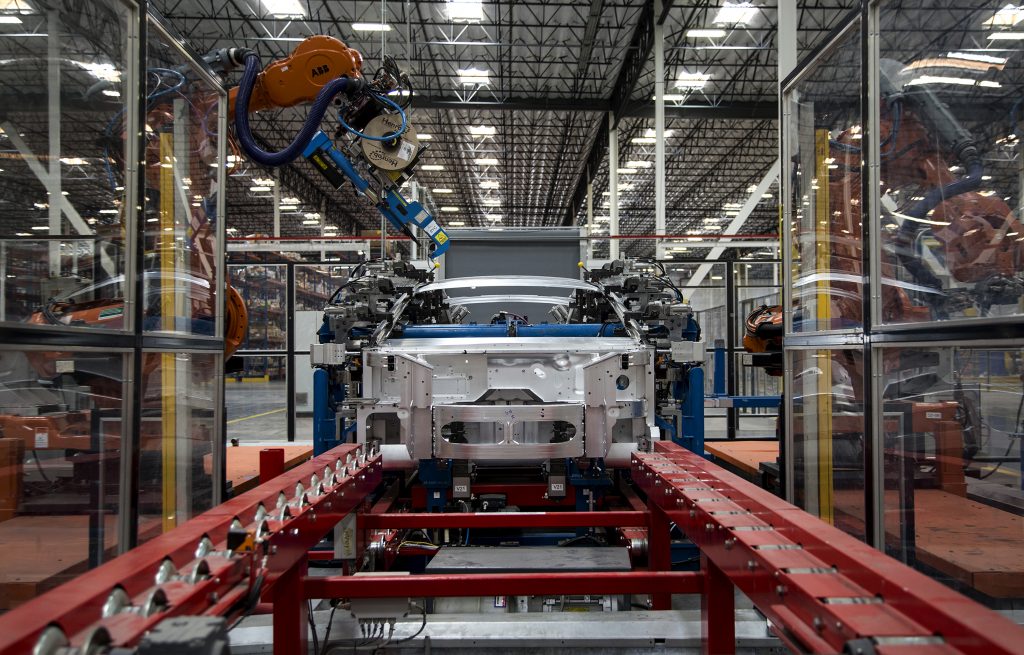 A premium luxury sedan born from the ashes of the Fisker Karma — a Tesla rival that wowed the automotive world before collapsing into bankruptcy three years ago — will soon begin rolling off a production line at California’s newest car factory.

When it is up and running, the Karma Automotive factory in Moreno Valley, about 60 miles east of downtown Los Angeles, will produce as many as 3,000 of the high-end Karma Reveros annually. The cars, again competing with Tesla, will be four-door luxury electric sedans priced above $100,000.

Karma Automotive joins Tesla on a list of locally based car and bus manufacturers, including Faraday Future, BYD and Atieva that together are making California ground zero for the electric vehicle market.

Like those companies, Karma is backed by Chinese money. The bankrupt Karma’s assets were purchased in 2014 by Wanxiang Group, a Chinese auto parts giant that also owns A123, the battery company that produced power packs for the Fisker cars.

Faraday, which recently announced its plan to build cars at a $1-billion facility in Nevada and another smaller factory in the San Francisco area, is owned by Chinese entrepreneur Jia Yueting. Atieva, a Silicon Valley-based electric car company, is controlled by the Chinese state-owned Beijing Automotive Industry Corp. BYD, which employs 160 workers at a plant in Lancaster that builds electric buses, is owned by the Chinese BYD Auto Co.

On a recent weekday morning, inside a massive, anonymous warehouse, bits and pieces of aluminum-bodied cars moved slowly along broad conveyor belts.

In one area, welders behind heavy masks were being trained to turn rectangular sections of metal into a working chassis. Across the way, 15-foot-tall robots were using rivets to join the frame sections to body parts. Further down the production line, car bodies that had been dipped in paint tanks were baking in a super-heated drying oven.

Technicians wearing hard hats and goggles watched the welders and robots, fine-tuning their efforts, making sure the practice vehicles were up to premium luxury automotive standards.

When they’re done, the Reveros will look and drive a lot like their Karmas predecessors. Though the new car will have its own front and rear fascia design, it will be powered by the same engine and same A123 battery, and contain many of the Karma’s interior and exterior design elements, as the car built by honored designer Henrik Fisker.

That car had a combined 400-plus horsepower and 960 pound feet of torque, and a top speed of 125 miles per hour. It could travel about 50 miles on electric charge alone, and 230 miles using its combined gasoline and electric power trains.

Sleek and low-slung, the Karma won Automobile Magazine’s Design of the Year award in 2011, and was named Luxury Car of the Year for 2011 by Top Gear Magazine.

“The Karma was loved and revered,” said Jim Taylor, the energetic auto veteran who, after decades with General Motors, is now Karma’s chief marketing officer. “They nailed the design. You’d be crazy to change it.”

Taylor and a Karma team scouted factories and courted governmental assistance in Tennessee, Texas, Indiana, South Carolina, Michigan and other locations before settling on Moreno Valley.

In the end, Taylor said, it was location more than hand-outs than lured Karma to California. While other states offered cash and tax incentives, Southern California offered the good weather and cultural amenities that help lure the best engineers and designers.

Even a low-volume car factory requires an enormous footprint. Karma’s Moreno Valley facility has 32-foot ceilings and occupies 550,000 square feet. When full production begins, 100 workers will build cars here, in addition to 600 other employees at Karma’s design offices and as many as 150 more engineering and sales staff in an office in Troy, Mich.

Building the factory inside an existing warehouse involved complications. A fully-functioning production line was among the assets orphaned by the Fisker bankruptcy. But the assets were still in the shuttered Fisker Scandinavian factory.

Karma Automotive’s owners may need all the patience they can muster. Despite the rapidity with which Karma has gotten up to speed — producing vehicles in a factory that was empty less than a year ago — electric vehicles account for less than 3 percent of all U.S. auto sales, and even industry leader Tesla has still not turned a profit.

“The ability of a company like Tesla to generate excitement, and high stock prices, has a lot of other companies convinced there’s money to be made in the EV space,” said Kelley Blue Book senior analyst Karl Brauer.

“That’s somewhat ironic because Tesla has never actually made money, and several other EV start-ups, including Karma’s predecessor, all went bankrupt. The challenge for the Karma will be convincing people to give it another try after a fairly high-profile failure.”