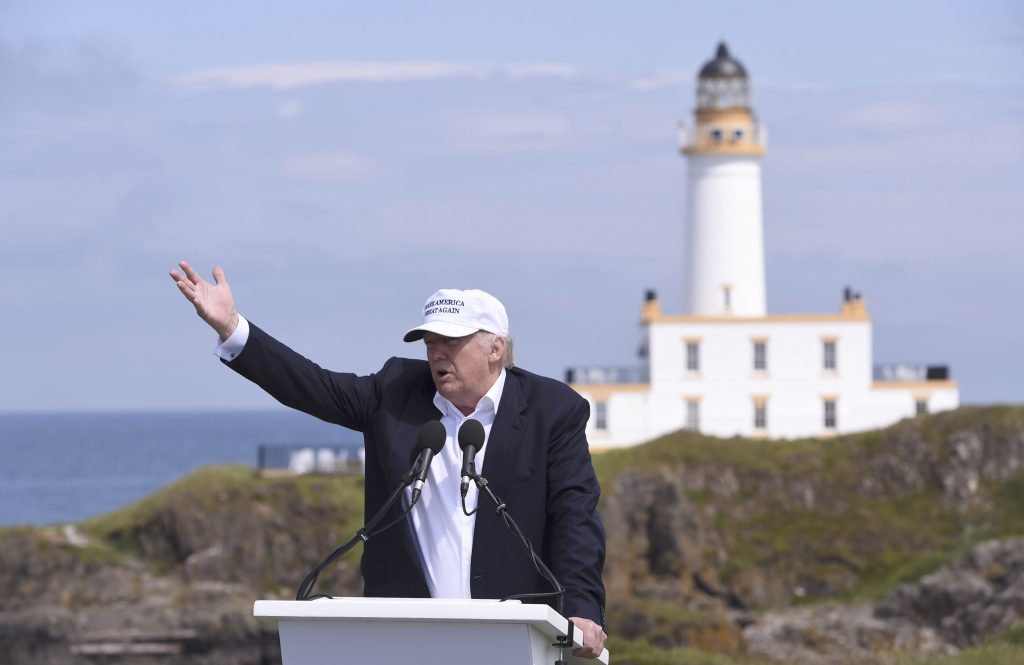 Donald Trump capped off his two-day overseas tour in a golf cart Saturday afternoon, zooming around the golf course he built on top of sand dunes. Running the country won’t be much different from building a resort like this, he told the pack of political reporters who followed in maintenance carts – “just a lot bigger.”

Amid the chaos of the day, Trump seemed to dramatically shift on two of his major policy proposals, although it was unclear whether he meant to do so, and his staff provided no clarification.

Some of Trump’s comments led his spokeswoman to confirm via email that Trump’s proposed ban on U.S. entry by foreign Muslims would apply only to those from countries rife with terrorism, instead of all Muslims. Later, over fish and chips at the clubhouse, Trump told a Bloomberg Politics reporter that he doesn’t consider “mass deportations” a part of his immigration plan, although he didn’t specify what that meant.

Trump’s goal for the trip was to promote two of his golf courses, not wade into foreign-policy discussions. But as Trump’s plane crossed the Atlantic, the United Kingdom voted to leave the European Union – and the swarm of political reporters who traveled there with him wanted to know how he would address the situation.

When Trump arrived at his newly opened resort in Turnberry on Scotland’s western coast on Friday morning, it seemed like an image reboot was in the works. After weeks of struggling to implement a general-election strategy, he fired his campaign manager on Monday, gave a carefully scripted speech attacking Hillary Clinton on Wednesday and adopted a more polished voice on Twitter.

There was great anticipation as Trump stepped up to the microphone at a news conference on the ninth hole of the course, close to a cliff. Before he could say anything, a man wearing a Turnberry sweater jumped up to apologize for having forgotten to hand out golf balls to the crowd – then tossed dozens of red golf balls featuring a black swastika in Trump’s direction. Secret Service agents surrounded the man, British comic Simon Brodkin, and escorted him away.

Trump then spoke to the world, standing in a sea of Nazi golf balls.

“This is an amazing honor; it’s an amazing day – very historic day for a lot of reasons, not only Turnberry,” Trump said in a monotone voice, with a white campaign hat pulled down low, just above his eyes. “This is one of the big votes in the history of Europe and Scotland and everywhere. . . . I think that it is purely historic, and what is happening is historic.”

He didn’t dwell on that history. Instead, Trump told the crowd that his mother was born in Scotland and adored the queen. He promoted his hotel suites, alluded to zoning changes and let everyone know that the golf course’s new sprinkler system is of “the highest level.” Trump recognized the previous owners of the resort, “friends of mine from Dubai” who he said “didn’t understand this golf thing.” He also marveled at his son Eric Trump’s ability to oversee the project.

He may have been jet-lagged or unnerved by the swastika-covered golf balls at his feet, but Trump appeared to lack his usual energy that morning. He leaned heavily on the lectern, rarely seeming excited about the words coming out of his mouth. At one point, he accidentally mixed up “Scotland” and “Florida,” the critical swing state where he owns a number of golf courses and where Clinton just passed him in a poll.

He couldn’t avoid the day’s headlines, as reporters pressed him to weigh in on the day’s developments beyond Turnberry.

Trump said that as president he would “embrace” Britain leaving the EU, but also “see how it plays out.” He mused that the falling value of the pound “could very well turn out to be a positive,” benefiting the travel industry and his resort. He wouldn’t take a position on Scotland’s renewed quest for independence – as its voters sharply disagreed with England and Wales, voting to stay in the EU – and he criticized President Barack Obama for taking a stance on the referendum, breaking the informal tradition of not taking aim at a sitting president from overseas. He also mentioned his foreign-policy advisers.

“I’ve been in touch with them,” he said, “but there’s nothing to talk about.”

At one point, Ewen MacAskill of the Guardian listed prominent British leaders who refused to meet with Trump because he is “regarded as toxic.” Trump called the reporter a “nasty, nasty guy.”

The next day Trump flew to Scotland’s opposite coast, to the golf course he built on sand dunes north of Aberdeen, then had dinner with media giant Rupert Murdoch. At the gate of the Trump International Golf Links, security turned away journalists from The Washington Post – which has been banned from all of Trump’s events for nearly two weeks – BuzzFeed and Politico, along with MacAskill.

Those who were allowed inside followed Trump on a tour of the course, stopping at holes 10, 13, 14 and 18 for questions.

Speaking on the green, Trump was asked whether a Scottish Muslim would be welcome in the United States under his restrictive entry policy. For the first time, he said that his proposed ban on Muslim entry applied only to those from “terror states.” His spokeswoman confirmed in an email that Trump’s proposed ban on Muslims entering the country would apply just to those coming from countries with heavy terrorism, although she didn’t provide any additional clarification on precisely which countries. In an interview with Bloomberg Politics after he left the course, Trump criticized Obama for deporting “vast numbers of people” and seemed to retreat somewhat from his own plan to deport 11 million illegal immigrants.

“I would not call it mass deportations,” Trump said of his immigration plan.

A spokeswoman did not respond to a request for clarification.

The Brexit vote came up again. “There’s always turmoil” in the markets, said Trump, who added that Americans have nothing to worry about.

“This shouldn’t even affect them,” Trump said. “I mean, frankly, if it’s done properly. If we had proper leadership.”

Three of the Trump golf course’s five immediate neighbors in Aberdeen were flying Mexican flags on Saturday in protest of his visit and his controversial comments about immigrants. For years, Trump and his associates have tried unsuccessfully to buy these properties or force the residents out.

He again brushed away questions about foreign-policy advisers, saying that “most of them are no good.”

He then abruptly changed the topic back to golf.