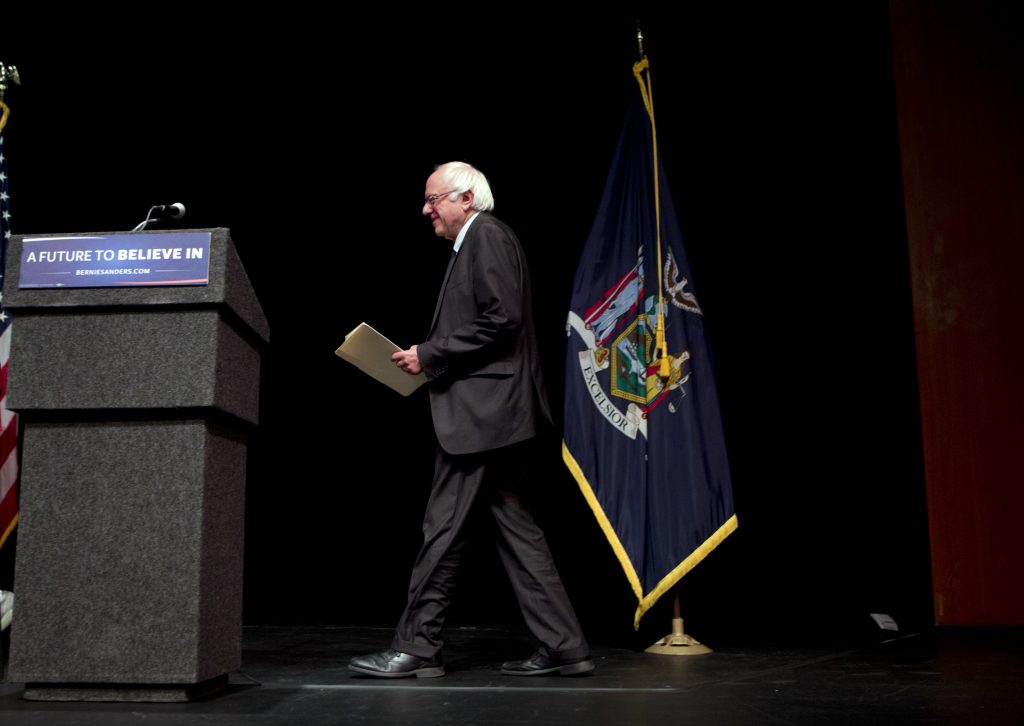 A draft of the Democratic Party’s policy positions reflects the influence of Bernie Sanders’ presidential campaign: endorsing steps to break up large Wall Street banks, advocating a $15 hourly wage, urging an end to the death penalty.

While the platform does not bind the Democratic nominee to the stated positions, it serves as a guidepost for the party moving forward. Party officials approved the draft early Saturday.

The Democratic National Convention’s full Platform Committee will discuss the draft at a meeting next month in Orlando, Florida, with a vote at the convention in Philadelphia in late July.

Sanders said Friday he would vote for Clinton, the presumptive nominee, in the fall election, but so far has stopped short of fully endorsing the former secretary of state or encouraging his millions of voters to back her candidacy.

The Vermont senator has said he wants the platform to reflect his goals — and those representing him at a St. Louis hotel said they had made progress.

“We lost some but we won some,” said James Zogby, a Sanders supporter on the committee. “We got some great stuff in the platform that has never been in there before.” Added Rep. Keith Ellison, D-Minn., a Sanders ally: “We’ve made some substantial moves forward.”

Deliberating late into Friday, the group considered language on the Israel-Palestinian conflict, an issue that has divided Democrats. The committee defeated an amendment led by Zogby that would have called for providing Palestinians with “an end to occupation and illegal settlements” and urged an international effort to rebuild Gaza.

The draft reflects Clinton’s views and advocates working toward a “two-state solution of the Israel-Palestinian conflict” that guarantees Israel’s security with recognized borders “and provides the Palestinians with independence, sovereignty, and dignity.”

In many cases, Clinton’s side gave ground to Sanders. The document calls for the expansion of Social Security and says Americans should earn at least $15 an hour, referring to the current minimum wage of $7.25 an hour as a “starvation wage,” a term often used by Sanders.

Sanders has pushed for a $15-an-hour minimum wage. Clinton has supported efforts to raise the minimum wage to that level but has said states and cities should raise the bar as high as possible.

Sanders’ allies wanted the draft to specify calls for a $15 per hour minimum wage indexed with inflation. Clinton’s side struck down a direct link, noting the document elsewhere included a call to “raise and index the minimum wage.”

The committee also adopted language that said it supports ways to prevent banks from gambling with taxpayers’ bank deposits, “including an updated and modernized version of Glass-Steagall.”

Sanders wants to reinstate the Depression-era Glass-Steagall Act, which prohibited commercial banks from engaging in investment banking activities. Clinton does not, but says her proposed financial changes would cast a wider net by regulating the banking system.

Also in the draft is a call for the abolition of the death penalty. Clinton said during a debate this year that capital punishment should only be used in limited cases involving “heinous crimes.” Sanders said the government should not use it.

Sanders, a vociferous opponent of the Trans-Pacific Partnership, was unable to get language into the document opposing the trade deal. As a result, the party avoided an awkward scenario that would have put the platform at odds with President Barack Obama.

Clinton and Sanders have opposed the deal. Committee members backed a measure that said “there are a diversity of views in the party” on the pact and reaffirmed that Democrats contend any trade deal “must protect workers and the environment.”

In a setback for Sanders, the panel narrowly rejected amendments that would have imposed a tax on carbon and imposed a national freeze on fracking.

The panel deliberated for about nine hours following several late nights and long hours of policy exchanges between the two campaigns and the Democratic National Committee.

Sanders, in a statement, said he was “disappointed and dismayed” that the group voted down the measure opposing the TPP. But he was pleased with the proposals on Glass-Steagall and the death penalty — and vowed to fight on.

“Our job is to pass the most progressive platform in the history of the Democratic Party,” he said.