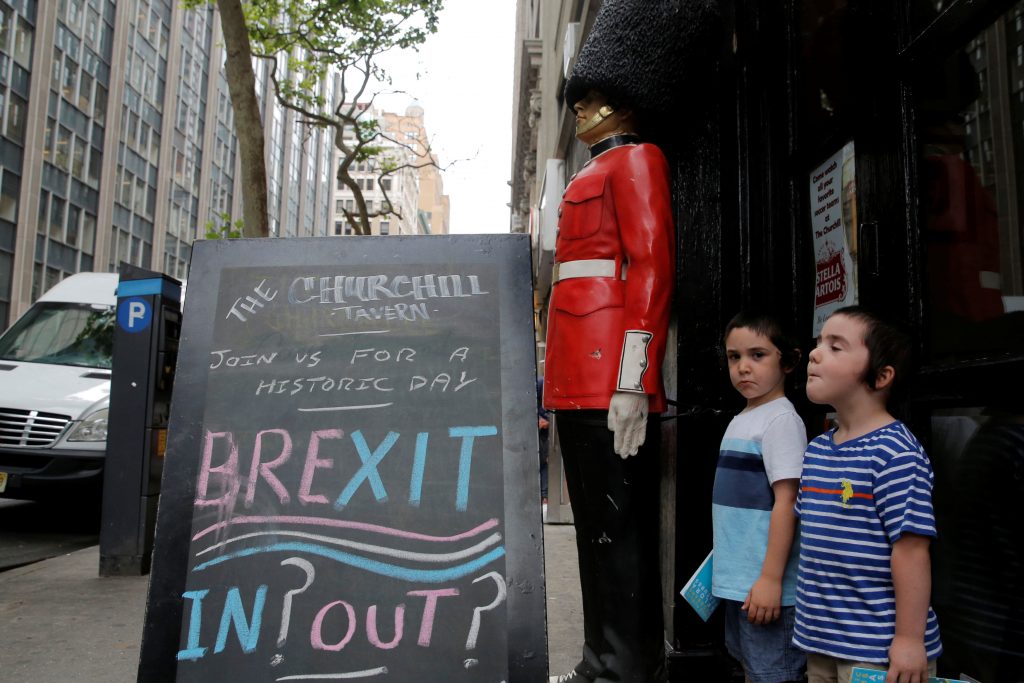 With the United Kingdom apparently voting to leave the European Union, financial markets were in turmoil Friday – and pundits were wondering where this venture into uncharted territory would lead the world economy. Israel, which has strong trade relations with the U.K., may be affected as well.

Speaking to Yediot Aharonot, several experts said that the “Brexit” may not affect Israel too badly. “The decision to leave the EU is likely to impact the country’s economy in several ways, including on its local trade,” said Yaniv Chevron of the Excellence-Nesuah investment firm. “Some 70 percent of Israel’s exports of about $4 billion a year is in pharmaceuticals, and 10 percent of the rest is in chemicals and aircraft.” These are items that are likely to continue being in demand, so sales are unlikely to be affected, he said.

The fall of the pound in the wake of the vote is unlikely to hurt Israeli exporters either, because exporters will be able to raise prices to make up for the depreciation of the pound against the shekel. Exporters of plastics, apparel, and other less “unique” items, which make up about 20 percent of Israeli exports to the U.K., are likely to be hurt by lower sales and/or smaller profits, as they will not be able to easily raise their prices in pound terms due to international competition.

One issue that could be of concern to Israel is a likely renegotiation of trade agreements across the EU. Israel has such agreements independently with the U.K. and the EU, but chances are that some of those agreements will have to be changed in light of what is likely to be Britain’s extensive economic “divorce” from the rest of Europe. The extent and impact of that divorce is not likely to be known for years.

According to Alex Jabotinsky of the Meitav Dash investment house, Brexit could cause the European Union itself to dissolve, or at least be significantly weakened. “The euro is likely to fall sharply, and the exchange rates both within EU countries and outside the Union are likely to fluctuate wildly, as weaker countries like Italy, Spain and Portugal see investment and bond sales fall.” Once again, turmoil in Europe will send investors rushing to the dollar and to U.S. Treasury bonds.

“Israel could also be hurt, although less than other markets,” he said. “A deepening economic morass in Europe will affect Israel, as the EU is Israel’s third largest trading partner. The export sector, which is already suffering to some extent, will see its problems worsen,” he added.

The dollar soared against the shekel Friday morning, rising 2 percent in value overnight and trading around NIS 3.9/dollar. That rise was not due to any weakness in the shekel, economists said, but because of the fall of the euro, which, along with the pound, sank as results came in from the British vote overnight Thursday. The euro was down 2 percent against the dollar, as well as against the shekel, with the euro falling to NIS 4.266.

As far as the Tel Aviv Stock Exchange is concerned, said Uri Greenfield of the Psagot investment house, stocks here are likely to be as affected as they will be elsewhere. Exchanges in the Far East were falling early Friday, and were set to fall sharply in the West as the day progressed. The next trading day in Israel is on Sunday, but already futures trading shows a sharp drop in stocks here.

But the effect on Israel is likely to be temporary, Greenfield told Globes. “As a tactical matter, the sharp drops of the coming days are likely to provide interesting opportunities for investments. The markets always react to situations like this, but eventually return to the fundamentals. There has been no change in the economic situation here, and there is an opportunity for profit” for investors who pick up cheap stocks in the coming days, he said. With that, he added, “there is no doubt that the British exit vote will increase investment risk in the coming months, as the effects of the vote will unfold and affect world markets and economies for a long time to come,” he added.