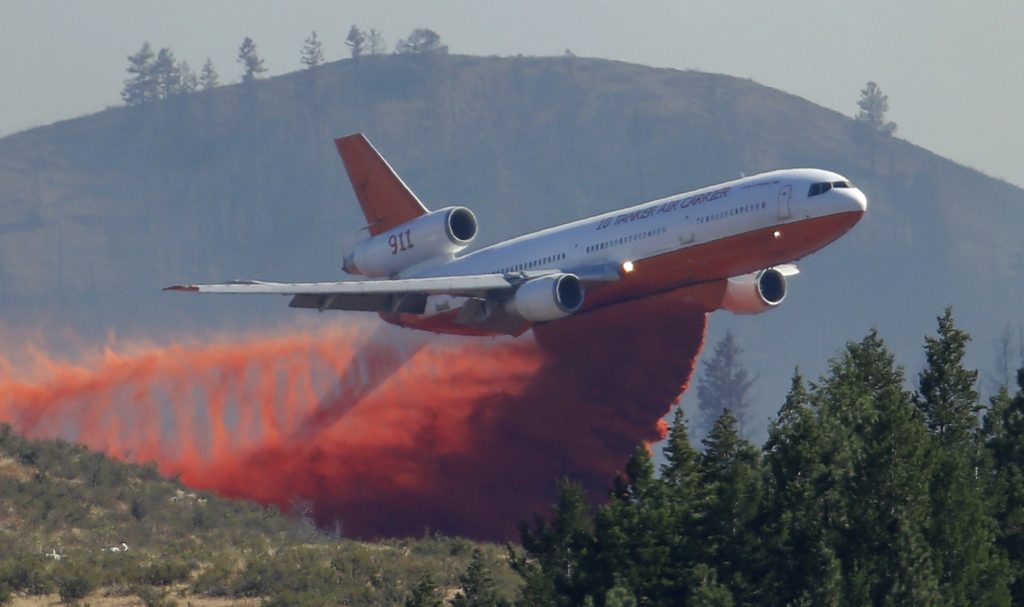 When Brian Cresto and his fellow firefighters fly toward a wildfire at just a few hundred feet off the ground, he’s scouting for the best spot for them to land when they parachute down.

Lately, he’s also been keeping an eye out for hobby drones that could take out their twin-engine propeller craft before it climbs to 1,500 feet, where the eight smokejumpers exit.

“It’s dangerous anytime you drop an aircraft down to a certain level,” said Cresto, a smokejumper with the U.S. Bureau of Land Management. “Drones are starting to be a part of that conversation.”

Hobby drone ownership has spiked in recent years, and more and more of the devices have been spotted flying illegally over active wildfires, where they can endanger the airplanes and helicopters being used to battle the blazes.

It’s a high-tech problem, and federal authorities are thinking high-tech to stop it: The U.S. Interior Department is working with drone makers and mapping companies to create a system that uses smartphone apps already on the market to quickly alert drone fliers to temporary flight restrictions at wildfires.

Initial attacks on a wildfire are crucial, but firefighting aircraft can’t fly if a drone is in the restricted area because a collision could be catastrophic, officials say.

Retardant bombers and helicopters typically fly even lower than smokejumpers, at just above the trees or rooftops, and have little time to react in an emergency. A drone collision could take out an engine or break a windshield. The devices also can get sucked into a helicopter’s intake or hit a rotor.

In just the past week, drone sightings have grounded aerial firefighters on three different days at a Utah blaze that has forced the evacuation of 100 homes. Utah Gov. Gary Herbert said those evacuations might have been avoided if not for the drones.

According to Federal Aviation Administration rules, hobby drones are limited to 400 feet above ground level and within sight of the operator. But internet videos show a stream of violators, including at wildfires.

“I’ve heard sometimes that at a wildfire, there might be 20, 30 guys out there flying their quadcopters,” said Patrick Harper of the Meridian-based Idaho Drone Co.

Wildfires tend to attract spectators, including drone pilots who can use their devices to capture stunning aerial footage from a unique perspective.

Authorities across the U.S. recorded 20 incidents in which drones flew too close to wildfires last year, with more than half hindering firefighting efforts. It has happened again at least nine times so far this year.

In Utah, a helicopter pilot refused an assignment after one of the recent near-drone collisions, fire spokeswoman Carissa Silvis said. A $1,000 reward is being offered for information leading to the drone pilot’s conviction.

On Thursday, hobby drones grounded flight operations at an Arizona fire where more than 15,000 people are under pre-evacuation notice.

The Interior Department hopes the new smartphone notifications will keep drone fliers at a safe distance. Its plan is to post data online that companies can start using in August to keep the notification apps up-to-date.

“It will be successful if we are able to provide real-time information and have it depicted on those mapping programs,” said Brad Koeckeritz, the department’s division chief for unmanned aircraft systems.

The next step is asking drone builders to make it possible for drone operators to activate systems that would automatically prevent a drone from entering temporarily restricted airspace, Koeckeritz said.

“For safety concerns, I agree that it would be a good step forward to start creating some shield-fence algorithm inside the drones that would prevent them from flying where there are wildfires,” he said.

But it should be an option for the drone flier, as some drones legally fly at wildfires, Claridge noted. Federal agencies are looking at drones for mapping fire perimeters, and are even developing drones to fight wildfires.

There’s urgency to the Interior Department’s plan because the FAA predicts 1.9 million hobby drones will be sold this year and as many as 4.3 million by 2020. Their popularity is due to falling prices and increasingly sophisticated onboard computer systems that make the devices easier to pilot, Harper said.

The FAA in December required drone operators to register crafts weighing between about half a pound and 55 pounds, meaning recovered drones could potentially be matched with their owners. And on Tuesday, the Obama administration created a new category of rules designed specifically for drones weighing less than 55 pounds, allowing commercial operators such real-estate agents, farmers, and others to fly them without special permission.

Those are steps in regulating drones, but Claridge and Harper said technology is still advancing faster than oversight.

Harper said hobby drone operators would do well to keep in mind some common-sense rules.

“If you’re going to fly someplace that causes somebody danger,” he said, “that’s not a hobby anymore.”

Dar Schmid works for Missoula, Montana-based Leading Edge Aviation and transports smokejumpers as a BLM contract pilot. He said pilots who fly into wildfires at low levels, including retardant bomber and helicopter pilots, often are navigating near mountains and dealing with heat and smoke.

They have too much going on in the cockpit to worry about drones and risk what he called task overload.

“You wouldn’t know it was coming,” Schmid said. “You’d just hit one, and the damage would be done.”