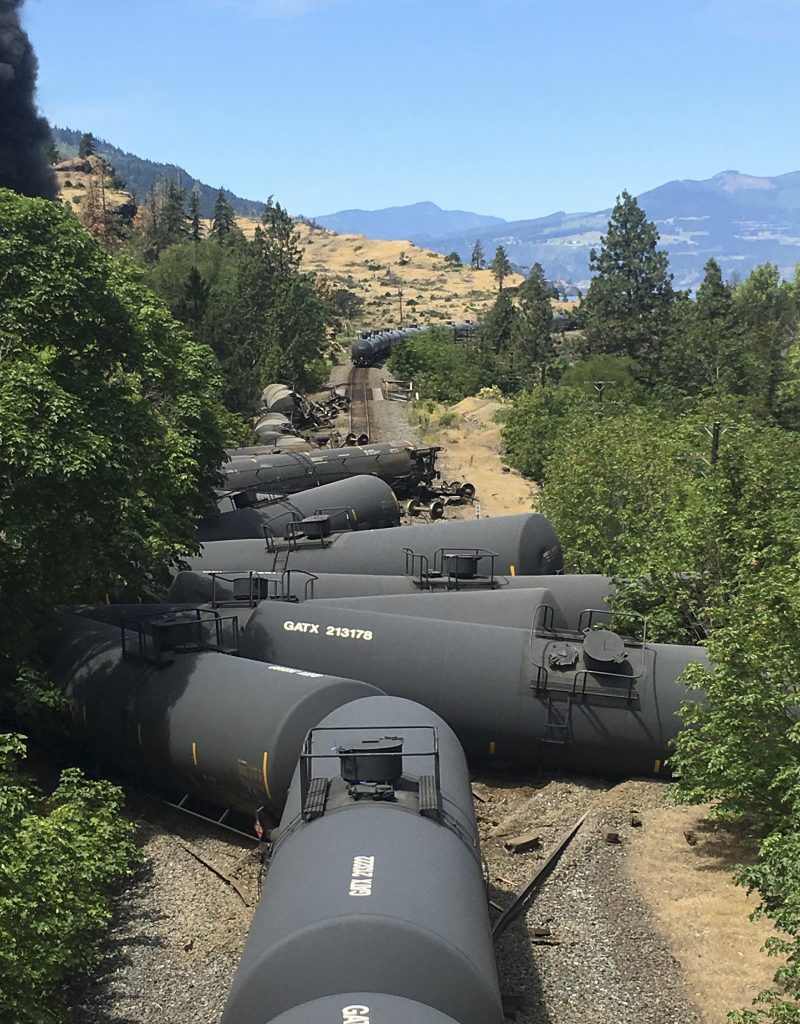 Preliminary findings on the June 3 derailment in the Columbia River Gorge raise questions about why the company didn’t find the broken bolts that triggered the wreck when it inspected the tracks right before the derailment. Union Pacific faces potential penalties for safety violations, officials said.

The Associated Press obtained the findings ahead of their Thursday release.

Advanced electronic brakes proposed by regulators could have made the derailment less severe, Federal Railroad Administrator Sarah Feinberg said. The brakes could have reduced the number of cars that went off the tracks and prevented the one that first burst into flames from being punctured, officials said.

Railroads have resisted those brakes because of their high price tag.

“We’re talking about upgrading a brake system that is from the Civil War era,” Feinberg said. “It’s not too much to ask these companies to improve their braking systems in the event of an accident so fewer cars are derailing.”

The derailment released 42,000 gallons of crude oil and sparked a massive fire that burned for 14 hours.

Union Pacific said its inspections didn’t detect the broken bolts that caused the derailment. The company tests for sideways movement in the rails using a machine that puts an amount of pressure equivalent to a locomotive on the rails — a stress test that would reveal loose or broken bolts, said Justin Jacobs, a Union Pacific spokesman.

The stress test previously was conducted every 18 months but will now be done every three months, Jacobs said. Union Pacific also has expanded inspections of all its tracks in Oregon and Washington state, particularly in curved portions of track, he said.

The company has said the rails were inspected as recently as May 31, but it wasn’t clear if the inspection included the stress test. Jacobs didn’t know.

The government’s preliminary report said walking inspections along the rails were critical to detect broken bolts and track movement. Feinberg said it was the railroad’s responsibility to detect those problems.

“We feel like it could have been prevented with closer inspections, better maintenance,” she said.

At least 27 oil trains have been involved in major derailments, fires or oil spills in the U.S. and Canada during the past decade, according to an AP analysis of accident records. Federal officials have responded with requirements for tougher tank cars, speed restrictions and other actions, but the accidents have continued.

Steven Ditmeyer, a rail consultant who worked in leadership positions at both the Federal Railroad Administration and at Burlington Northern Railroad, said sheared-off bolts like those seen in the Oregon derailment are likely symptoms of a larger problem.

In the 1990s, he said, Burlington Northern had a series of derailments on tracks in Washington state that all involved sheared off cut spikes, which served the same function as the bolts in question in the recent wreck.

Investigators eventually determined overloaded cars, a lack of lubrication between the wheel assembly and the body of the tanker cars and not enough gravel in the railroad bed combined to put strain on the track when the train was in a curve. That strain loosened the bolts holding the rails to the rail ties and pushed the rails apart, causing derailments, he said.

“When they said those sheared lag bolts, that was the hint that said they really need to look in the direction of these other aspects,” Ditmeyer told the AP. “These are heavy cars when they’re fully loaded,” and a treatment to reduce the volatility of the Bakken crude makes the oil heavier, he said.

The Oregon Department of Transportation last week asked federal rail authorities for a moratorium on oil trains in the Columbia River Gorge after also expressing concerns that the weight of the oil trains might be too much for the tracks.

In a presentation last week, department administrator Hal Gard said the lag bolts found at the scene were rusted on both ends, indicating they were sheared off before the derailment. State officials showed a photo of a pile of lag bolts collected at the site.

The report was released the day after Union Pacific said it would start moving oil trains through the scenic Columbia River gorge again sometime later this week.

The company defended its decision in a statement, reiterating the federal obligations it is under and highlighting the tiny fraction of its Oregon shipments — less than 1 percent — that come from oil trains.

In addition to state transportation officials, Multnomah County and several municipalities including Portland and Mosier have called on Congress and the White House for bans on oil being moved by rail, which is under the federal government’s authority.

Oregon Gov. Kate Brown has called for a federal moratorium on transporting oil on trains until the system is unquestionably safe.