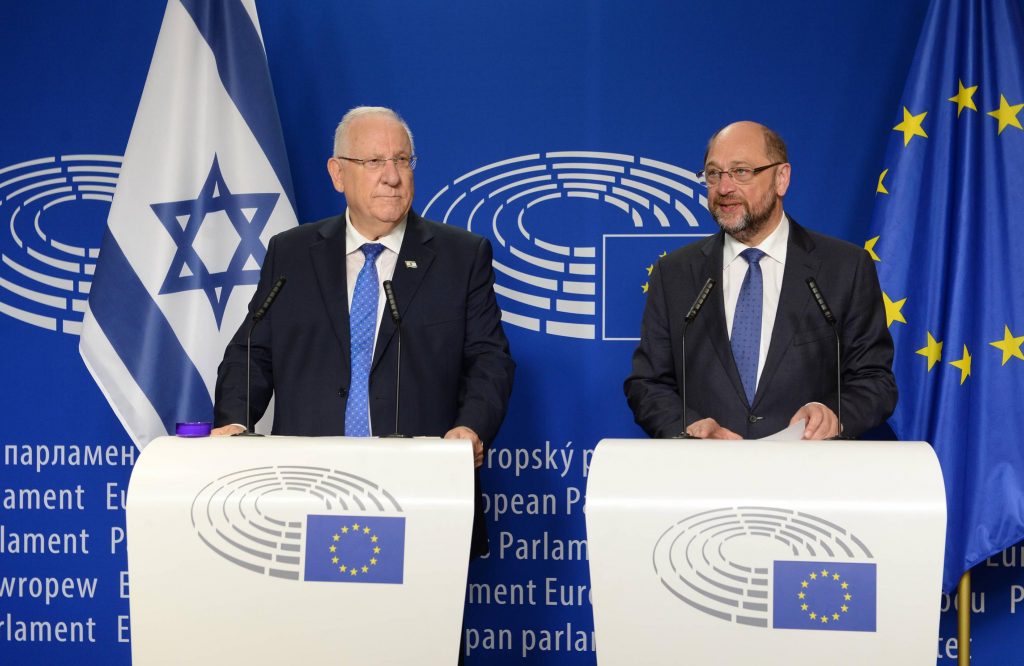 Israel’s President Reuven Rivlin delivered a strikingly blunt address to the European Parliament on Wednesday in which he said that the conditions for a peace agreement with the Palestinians have not materialized and that the French initiative just endorsed by the European Union will not further the peace process.

“With all the difficulty and pain involved, we must look at reality straight in the eye and tell the truth,” he told the diplomats at the special plenary session. “Currently, the practical conditions, the political and regional circumstances, which would enable us to reach a permanent agreement between us — the Israelis and the Palestinians — are failing to materialize.”

Rivlin said that the leading obstacle to peace is the absence of a partner. “In order to achieve a comprehensive, permanent agreement, an effective leadership is required. However, the Palestinian leadership today is divided in — at least — two,” and noted that “Hamas, which rules Gaza … is ideologically committed — in both its political and military leadership — to the annihilation of Israel.”

He criticized the attitude of the international community, saying that, “for years [it] has been acting as a mediator between the parties based on one inflexible paradigm, that of striving to renew negotiations toward a permanent agreement. This paradigm draws to a dichotomy: ‘Two states or a bi-national state,’ ‘All or nothing,’ ‘Here and now’ or ‘Nevermore.’” A new paradigm is needed, he said.

“The French initiative suffers from those very fundamental faults. The attempt to return to negotiations for negotiations’ sake, not only does not bring us near the long-awaited solution, but rather drags us further away from it.”

“Israel has a growing sense of impatience (when it comes to Europe). There are those who feel anger and frustration toward certain European actions, vis-à-vis what they perceive as sometimes unfair criticism, sometimes even contaminated by elements of condescension, and some would even say double standard.”

The president expressed Israel’s appreciation of Europe’s desire to help bring the Mideast conflict to an end, but urged them “to focus efforts at this time in a patient and methodic building of trust. Not through divestments, but through investment; not by boycotts, but by cooperation.”

Rivlin was received on his arrival by the President of the European Parliament Martin Schulz, and the two stood for the Israeli and European anthems.

Meanwhile on Wednesday, an official of the European Union told The Times of Israel that the EU regarded an Israel foreign ministry official’s accusations of cynical maneuvering and “coloniolism” on their part as “offensive, inaccurate and inappropriate.”

The reference was to Foreign Ministry spokesperson Emmanuel Nahshon who said on Tuesday that EU policies vis-a-vis the Israeli-Palestinian conflict feel like the “ghosts of a colonial European past coming back to life.”

“Contrary to Nahshon’s remarks, the EU is dealing with the challenges it is facing in the world, in the region and at home,” the official said. “The lack of progress in the Middle East peace process, which takes its toll on Israel and on the Palestinians, and continues to reverberate regionally and globally, is one of them.”