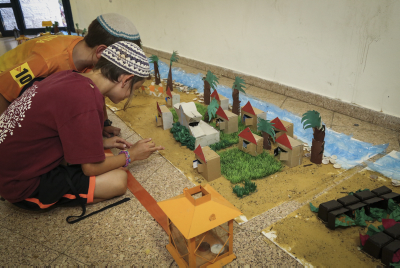 The city of Yerushalayim will this week rename a public square after Gush Katif, the area in Gaza from which the Israel government removed all Jews, rendering some 10,000 people homeless in 2005. The new square is located on Shaare Tzedek Street, right outside the Gush Katif Museum.

The decision to rename the square was unanimously approved by the city’s Street Name Committee. Yerushalayim is the first Israeli city to name a street or public thoroughfare after the communities in Gaza that were evacuated in order to carry out the Disengagement.

Deputy Mayor Yael Anteby, chairperson of the Street Name Committee, said that “it is important to preserve the memory of the Jewish communities in Gaza.” The management of the Gush Katif Museum expressed its gratitude to the city, saying that it was an appropriate recognition of the work of the Museum and an important reminder of a tragic time in Israeli history.

The Museum was established 8 years ago to preserve the collective memory of Gush Katif in the mind of the Israeli public. Hundreds of thousands of people have visited it to review the area’s history and eventual demise at the orders of then-Prime Minister Ariel Sharon.