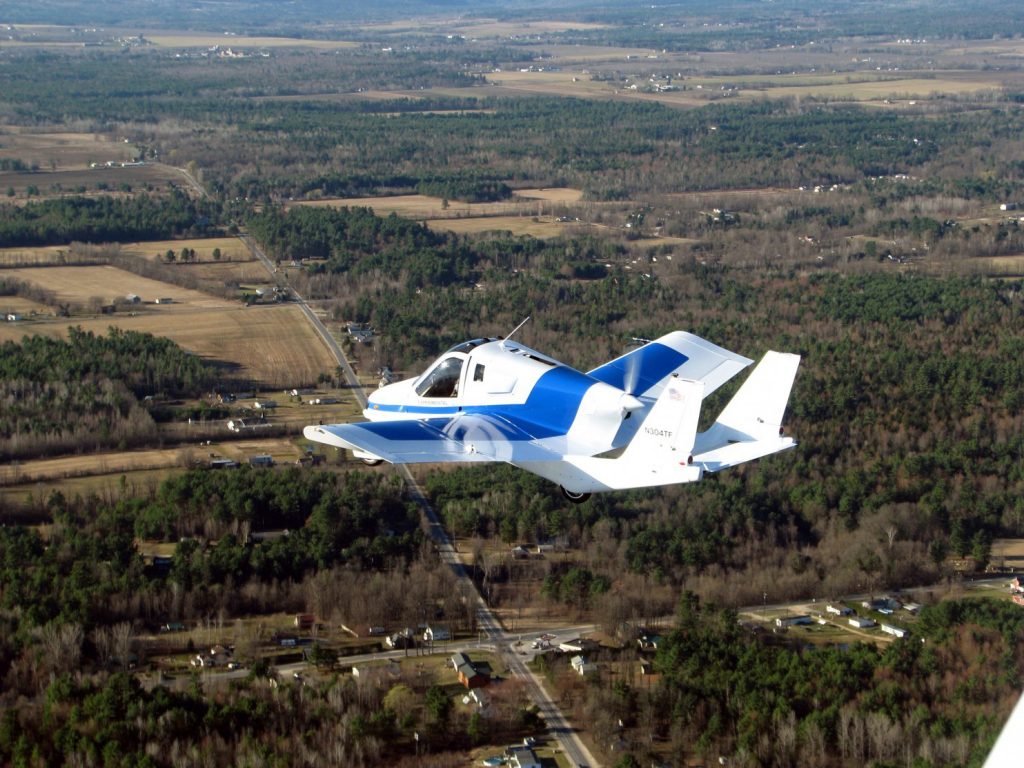 It looks like a goofy mosquito, its fat cockpit shoving through the wind while aloft, its wings folded up like a dragonfly while grounded. And it marks the biggest step toward a real, commercial flying car.

The Terrafugia Transition earned an exemption Sunday from the Federal Aviation Administration as a “light sport aircraft,” meaning the federal government is on track to legalize the first flying car.

After a few more rounds of audits and paperwork, the Transition, a two-seated flying thingamajig, can take to the skies under the command of sport pilots, a low-threshold classification. Terrafugia can also commercially produce the aircraft without repeated burdensome federal airworthiness tests.

Flying-car industry executives say their products should enter the consumer market —albeit at a high price — in the next decade.

But all that depends on clearing regulatory hurdles both as automobiles and flying machines.

“We’ve worked with the FAA, and you’re going to have your bureaucrats and people who don’t want anything to change, but other people can see the future,” said Paul Moller, president and chief executive of aviation firm Moller International.

The Transition gained exceptions to be heavier, caused by federal automobile safety requirements, and to exceed the speed limits, because a heavier airplane has to fly faster.

Pilots can operate the aircraft with a “sport” license, which requires 20 hours of lessons.

In the beginning, light sport classification did spur innovation among aircraft makers. Cessna, Piper and Cirrus all made light sports, then discontinued them. Profit margins were better on heavier, more luxurious aircraft.

That left the category mostly to inventors and small businesses that made planes for fun, said Dick Knapinski of the Experimental Aircraft Association.

And it left the skies open to flying cars.

A basic small car — the Toyota Corolla, for example — weighs 2,800 pounds. Strip out extra material to help it take flight, and it’s not hard to meet FAA weight requirements, especially with a waiver.

Terrafugia’s waiver shows a path for other flying car companies to get a federal go-ahead. Between roadworthiness and airworthiness, experts say, approval in the latter is much more difficult to attain.

In other words, it’s easier to make a street-legal airplane than an air-legal car.

The Transition, and models from other companies looking to utilize the light sport classification, have the footprint of a large pickup truck. They have side-view and rear-view mirrors or display screens that eliminate blind spots caused by folding wings.

Terrafugia designed the vehicle so those with basic drivers licenses can use it on roadways, pending the approval of federal auto regulators.

They’re part of a camp in the flying car industry that sees their machines taking off and landing on a runway, like a conventional airplane, then driving the “last mile” to a final destination. Others see the contraptions lifting off and landing vertically without the use of a runway.

Both can utilize the light sport category.

Slovakia-based Aeromobil also makes a flying-car-type vehicle that uses a runway. “We’re trying to type-approve it as a plane and one that is recognizable as a plane, then we’ll try to approve it as a car,” said Douglas MacAndrew, Aeromobil’s chief technical officer. “Those things are certainly technical challenges, but they’re not legislative roadblocks as of now.”