Regional Sting Operation: Jellyfish Targeted Before They Can Multiply
Regional 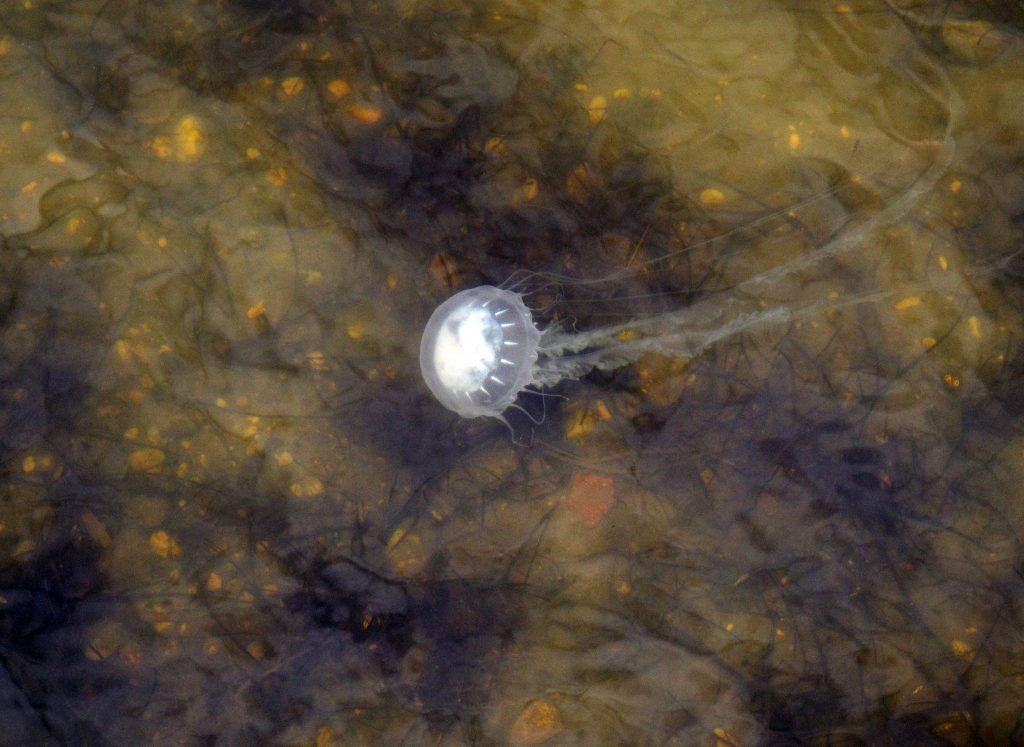 Environmental officials and waterfront homeowners in New Jersey are conducting a reverse sting operation against jellyfish in inland waterways, going after the gelatinous creatures before they have a chance to grow and multiply.

The state’s Department of Environmental Protection recently carried out a program to show people living on bay and riverfronts how to launch a pre-emptive strike on sea nettles, a species of stinging jellyfish that have turned some parts of Barnegat Bay and associated rivers into no-go zones for swimming.

Soon after the effort began, a dime-sized species called the clinging jellyfish began appearing in the bay and in the Shrewsbury River about 45 minutes to the north. The invasive species that’s native to the Pacific Ocean packs an intensely painful sting, and recently sent a New Jersey swimmer to the hospital where he needed to be treated with morphine for three days.

The idea is to scrub or power wash bulkheads and underneath floating docks where speck-sized jellyfish polyps attach themselves and grow until the time is right in late spring for them to burst forth into millions of new jellyfish that are sting-ready by summer.

And scientists are researching potential natural predators of infant sea nettles. Nudibranchs, a type of marine gastropod mollusk, are being collected from Barnegat Bay and studied to see which species chow down the most on jellyfish polyps.

The effort won’t make much of a dent in the numbers of ocean-borne jellyfish that visitors to the Jersey shore may encounter. But it could at least help slow the advance of sea nettles along the hundreds of miles of lagoons, river and bay fronts that are an integral part of the Jersey shore’s tourism economy.

“If you go swimming and you get stung, it’s not pleasant,” said Paul Bologna, director of marine biology and coastal sciences at Montclair State University, whose research has earned him the nickname “Dr. Jellyfish.”

Several species of jellyfish can cause problems like painful stings, and a few can even kill, in rare cases. In 2013, jellyfish briefly shut down a nuclear power plant in Sweden by clogging the intake pipes it uses for water to cool the reactor. A year earlier, a similar mishap idled a California nuclear plant.

People do swim in portions of Barnegat Bay, but jellyfish stings have plagued some areas; the Metedeconk River in Brick has to close its beach to swimming several times a year when jellyfish get too numerous.

Some species in Asian coastal waters that can grow to 400 or 500 pounds have ripped fishermen’s nets, and ruined their fish catches by stinging them with toxins.

That led to the development by the Korea Advanced Institute of Science and Technology of a jellyfish-shredding robot. It looks like a self-propelled fan that seeks out large swarms of jellyfish and uses rotating blades to shred them into strands of goo.

Jellyfish have some benefits: They are food for sea turtles and some species of fish. But in inland waterways like New Jersey’s Barnegat Bay or Maryland’s Chesapeake Bay, they can do more harm than good.

Ed O’Malley, of Cranford, New Jersey, sails his boat on Barnegat Bay near where state crews were scrubbing jellyfish off docks one recent day. He welcomes the attack on the infant jellies, recalling how dense the sea nettle population can become in the area.

“You could almost walk across the bay on jellyfish,” he said of one particularly bad summer a few years back. “It was wall-to-wall sea nettles. I’m thrilled to see this kind of effort. It should have a big impact.”

While sea slugs can eat the sea nettle polyps, the jellyfish are thriving in the low-oxygen waters of lagoons, which don’t get flushed all that much by tides.

Residents and researchers agree that sea nettles receded somewhat after Superstorm Sandy pounded the Jersey shore in 2012, lashing jellyfish polyps off bulkheads and docks. The storm also destroyed many bulkheads and floating docks, depriving the jellyfish of habitat on which to grow.

But most of the damage from the storm has been repaired, and the idea is to prevent the population from exploding again.

“If you can get a handle on this population now, you can make a dent in the adult population in the summer,” Bologna said, watching as crews used brushes to scrub the underside of a small floating dock for a personal watercraft. “Something like this can hold 50,000 to 100,000 polyps.”

That was just one of hundreds, if not thousands of such docks along the miles and miles of bulkhead along the shore.