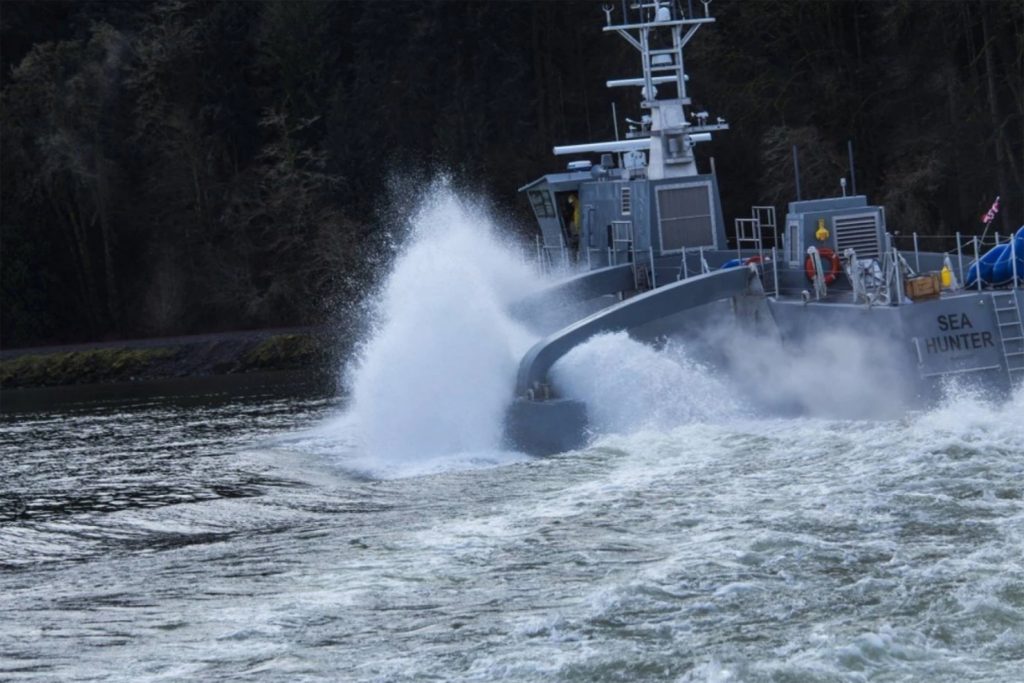 In his quest to transform the way the Pentagon wages war, Defense Secretary Ashton Carter has turned to Silicon Valley, hoping its experimental culture, innovation and sense of urgency would rub off on the rigid bureaucracy he runs.

Carter has made several trips to the region and appointed Eric Schmidt, the chairman of Google’s parent company, to an advisory board. And recently he sat down at the Pentagon with Elon Musk to see what suggestions the billionaire founder of Tesla and SpaceX might have to make the nation’s military more efficient and daring.

Musk’s answer? “Having an incentive structure that rewards innovation is extremely important,” he said in an interview after the meeting. “It’s economics 101. Whatever you reward will happen.”

The Pentagon finds itself in a new arms race, struggling to keep pace with forms of combat that are fought with bytes as well as bullets.

The technological advancements disrupting established business sectors are now shaking up the world of war — where robots, swarming drones and weapons enhanced by artificial intelligence might one day rule the skies and seas. And just like in industry, the advantages may be fleeting.

The Pentagon is seeking “an enduring competitive edge that lasts a generation,” said Loren Thompson, a defense consultant who serves at the Lexington Institute, a think tank based in Arlington. “But generations in technology these days are measured in months.”

Harnessing the latest technology to upgrade the Defense Department’s arsenal is a top priority for Carter, who recently said, “The race now depends on who can out-innovate faster than anyone else.”

The effort has a renewed energy in the waning months of the Obama administration, which is trying to embed the effort into the bureaucracy — and budget. The Pentagon is turning to start-ups and steering billions of dollars to its own laboratories and project teams to develop prototypes for the kind of promising technologies it may need in the future.

It is testing autonomous ships that can remain at sea for months without a crew, an electromagnetic railgun that fires a projectile that can travel at seven times the speed of sound, and increasingly powerful laser weapons that sizzle their targets.

At a recent conference put on by Defense One, a website that provides news and analysis on defense and national security, highlighted an effort to produce “revolutionary textiles that combine fibers with electronics to create fabrics that can sense, communicate, store energy, monitor health, change color, and much more.”

The Pentagon speaks of its “Third Offset Strategy,” a way to offset shrinking budgets and transient technological superiority. The first offset was the use of nuclear deterrence to keep the Soviets at bay starting in the 1950s. The second was the advent of new precision munitions and stealth to overwhelm robust air and ground forces of adversaries.

The Pentagon hopes that this is the dawn of a third technological revolution, even if the conditions are markedly different. Instead of trying to offset the advantages of a single, traditional adversary, the Pentagon faces challenges on multiple fronts, including large, technologically advanced nations such as Russia and China, smaller, aspiring powers such as North Korea, and independent non-state actors such as the Islamic State.

As part of the earlier offset campaigns the Pentagon adopted military capabilities that emerged from its own labs. But big advances in robotics, biotechnology and computing are coming out of the commercial sector, much of which wants little to do with the Pentagon.

This round has gotten off to a fitful start, if for no other reason than the skepticism aroused by the late-term push of an outgoing administration. There are also doubts about nurturing a start-up mentality in a bureaucracy that must hew to drawn-out and unpredictable budget cycles.

Some companies are “watching to see how serious this is,” said Rep. Mac Thornberry (R-Texas), chairman of the House Armed Services Committee. “Is this a fad? Is this going to last beyond this administration? And part of the problem is the acquisition system impedes this sort of development.”

Musk said he and Carter had a “high-level” discussion not about procurement programs but about innovation. One of Musk’s suggestions was that the Pentagon needs to embrace failure.

“Whenever you do try to do things that are new, and you’re in unchartered territory, there will be failures because you don’t know the path,” Musk said. “There should be no penalty for a failure where it was thoughtful and considered.”

But in a massive and often risk-averse bureaucracy, that might be easier said than done.

Nevertheless, the Pentagon plans over the next five years to invest $18 billion in the Third Offset, including about $6 billion in the classified “black” budget, according to Mackenzie Eaglen, a fellow at the American Enterprise Institute who focuses on defense issues.

The Defense Department opened an outreach center in Silicon Valley to encourage some of the most innovative start-ups to turn their attention to national security. And when that effort showed mixed results in its first year, Carter moved unusually fast to overhaul it, installing new leadership that reports directly to him. He also announced that the Pentagon would open a similar office in Boston.

The shake-up in Silicon Valley was done specifically “to signal to the bureaucracy that this is of the highest priority to the department,” Eaglen said. “The entire president’s budget was built around the Third Offset and the threats that Carter believes the U.S. military should be prepared to confront.”

After decades of unmatched superiority, the Pentagon fears that potential adversaries have benefited from the proliferation of commercial technology and have caught up with the United States. The Pentagon is preparing for what Deputy Defense Secretary Robert Work called “network-on-network warfare” against more traditional rivals, such as China and Russia, after more than a decade of counterinsurgency warfare in Iraq and Afghanistan.

The idea is that “advances in artificial intelligence and autonomous systems [are] going to lead to a new era of human-machine collaboration and combat teaming,” he said during a recent event at the Atlantic Council, an international-affairs think tank.

The goal is not “killer robots that roam the battlefield,” said Work. “I think more in terms of … the ability of a machine to assist a human, where the human is still in control in all matters, but the machine makes the human much more powerful and much more capable.”

Much of the work is being done in the Pentagon’s top-secret labs, at places such as the Defense Advanced Research Projects Agency (DARPA), the Office of Naval Research and the secretive Strategic Capabilities Office.

The ONR is based in a nondescript office building in Arlington, Va., just down the block from DARPA. The low-profile agency employs 4,000 scientists around the world and funds research at universities and throughout industry. At any given time, about 12,000 DARPA projects are underway, and the agency produces 350 to 400 technical patents a year, said Rear Adm. Mathias Winter, the chief of naval research. In 70 years in existence, the agency has funded 60 Nobel laureates.

“We want to do the impossible, can’t-be-done, there’s-no-way-that’ll-ever-happen problems,” Winter said in an interview. “That’s what scientists do. We do magic. And the engineers have to do the miracle.”

Next month, the magic will come in the form of a swarm of 30 small drones that will fly together like a flock of birds, “break off a cadre to be able to potentially go attack something . . . and then come back and regroup and go,” Winter said.

Lasers are another priority. In 2014, the Navy deployed a $40 million, 30-kilowatt laser that was mounted on the deck of the USS Ponce in the Persian Gulf. Service members practiced taking out drones and small boats using a video-game-like controller. Now it is fully operational, and the Pentagon could record its first kill with a laser.

The technology is moving fast, and by 2018, DARPA plans to test a 150-kilowatt laser on a ship that will be five times more powerful than one on the USS Ponce.

At DARPA, the Third Offset is viewed differently from the previous offset strategies, which gave the United States a firm lead over its adversaries for decades. This time, the effort is seen as much more dynamic, using technologies that evolve quickly over time, said Arati Prabhakar, the agency’s director. Sometimes that will come through software that’s easy to upgrade. Or through artificial intelligence, so that machines will be able to learn and adapt on their own.

“Where are the breakthroughs going to come from?” she said. “A theme is if you combine access to leading-edge commercial technology and deeply integrate it with DOD [Department of Defense] secret sauce, that’s where you get phenomenal advancements in capabilities.”

One example is DARPA’s 132-foot-long autonomous ship. From the outside, it looks like another military ship. But without a crew, it can venture into hostile territory without the risk of human casualties, and it is “designed to go many thousands of nautical miles and has a tiny fraction of the operating cost of a destroyer,” Prabhakar said.

Despite the push to attract the talent and technology of Silicon Valley, traditional defense contractors say they continue to innovate. BAE Systems, for example, is working on “cognitive electronic warfare,” which helps aircraft defend against radar systems, often adapting to threats in the moment.

Raytheon, a big defense contractor based outside Boston, has advanced artificial intelligence by creating small robots, Hercules and Athena, that run on solar power but are programmed to stay out of the light. That conflict created what scientists likened to hunger, and a life-death balance that the machines had to sort out on their own.

The company also has developed a tablet computer that could call in an airstrike with as few as three clicks — when not engaged in more familiar tasks, such as enabling soldiers in the field to chat as if they were sitting at their desks or share maps and video. Another version of the software, Jump Master, is designed to give paratroopers information on wind direction and targets on the ground.

The goal is to “drive speed” in an effort to help soldiers make better decisions faster, said Tom Kennedy, Raytheon’s chief executive. The information streaming on the tablet will help soldiers decide “what type of weapons to use, where the threats are located, what’s the best maneuver to be able to win and defeat the threat.”

But to provide innovative technology with a secure pipeline to the battlefield, the Pentagon has to institutionalize the program so that it can survive a change in administration, analysts said. That is why the senior leadership has given speech after speech about the strategy, and why they have rushed to get these technologies in development.

Eaglen, at the American Enterprise Institute said, “They’ve planted the seeds that will be sprouting for the next team.”