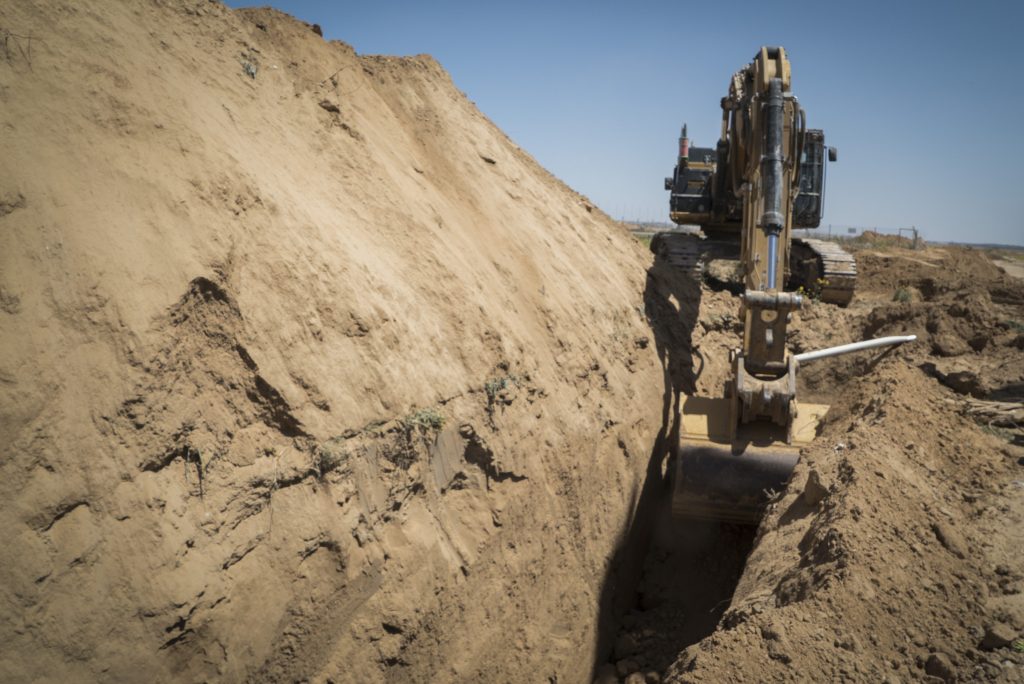 Israel is reportedly constructing a deep underground wall around the Gaza Strip, in an attempt to counter the threat of assault tunnels built by Hamas terrorists who rule the coastal enclave.

The move, which comes almost two years after Israel fought a deadly 50-day war with Hamas in Gaza, was reported by the Israeli news outlet Ynet.

Israel’s Defense Ministry declined to comment on the initiative.

On Friday morning, two oversize excavators sat silhouetted on the horizon here. Their location marked the point where the fields of this agricultural cooperative touch the edge of the Gazan town of Khan Younis.

The presence of more than 30 Hamas-built attack tunnels around the Gaza periphery shocked Israeli citizens during the 2014 war. At least 14 of the tunnels went under the fence line and into residential communities in Israel. Residents still sometimes report that they hear scraping and digging sounds beneath their feet.

In 2014, Israeli leaders said their reasons for fighting Hamas were to wipe out the group’s rocket arsenal and remove the threat of the tunnels. More than 2,100 Palestinians in Gaza and 72 Israelis were killed during that summer’s conflict. But a senior Israeli military officer told The Washington Post on Friday that the war had failed to eliminate the prospect of a future conflict.

Today, the area is quieter than it has been in a decade. But there is still tension. At least three new tunnels have been detected over the past year, and rockets are still fired periodically from the Gaza Strip into Israel.

Many military analysts here say it is only a matter of time before Israel and Hamas fight again.

“Hamas is busy preparing its forces for any future attacks on Israel,” said the officer, speaking on the condition of anonymity in accordance with military protocol. “In the short term, they want quiet. But in the long term, they want war. It is unavoidable.”

He said construction of a new wall around Gaza would help better protect Israeli citizens who live in the small, mostly agricultural communities in this area.

According to the media report, the new wall will update the existing wire border fence, which was constructed in 2005 after Israel withdrew its Jewish settlements from the Gaza Strip. It will extend the length of the Palestinian territory’s roughly 40-mile border with Israel and cost an estimated $570 million. Exactly how high, or, more important, how deep the wall will reach was not revealed.

“Most of it will be under the ground, where, although it might still be possible for Hamas to build a tunnel, if it’s as deep as 30 meters, it will be much harder for them,” said Kobi Michael, a senior researcher at the Institute for National Security Studies and a former deputy director general of the Ministry of Strategic Affairs.

“There is a problem with these attack tunnels, and we don’t have a good solution. But this will definitely minimize the probability of another attack,” he said.

Adele Raemer, a resident of nearby Kibbutz Nirim, said the construction of a wall was among the promises made to residents as part of efforts to boost their security after the 2014 war.

“This should have been done a while ago,” Raemer said.

But, she said, “building a wall, getting us a better Iron Dome that works at a closer range to protect us from the rockets, is all OK. But it is really just like putting a Band-Aid on a blood-gushing wound.”

The only move that will make residents feel more secure, Raemer said, is to reach a point of interaction and normalization between Israelis and Palestinians in Gaza, the way it once was.