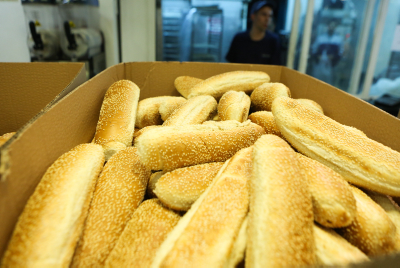 An illegal Arab worker who was injured on the job was awarded NIS 180,000 ($46,500) for injuries he incurred at work. A Tel Aviv court awarded the 17-year-old victim of a bakery machine mishap the sum after determining that his employer was at fault for the 2014 incident. The victim had been seeking NIS 1 million ($258,000) in damages for the injury, which partially damaged his right hand.

The Arab worker was employed at a bakery in Jaffa, after having snuck into Israel without a permit. He was employed as a baker, and in 2014 his hand got stuck in a machine. He was treated and determined to have lost 20 percent of capacity of the use of his right hand. In court, his attorney demanded more than a million shekels in compensation, since his right hand was essential to his earning a living.

The bakery, for its part, denied that the incident had even taken place. No one representing the bakery appeared at the hearing. In his decision, the judge decided to award a sum that would be relevant to the loss of capacity in a laborer’s ability to work according to standards in Palestinian Authority-controlled areas. The judge did not relate to the illegal labor aspects of the case, nor to the illegal presence of the PA resident in Israel.