Regional De Blasio Down, Not Out as Probes and Spats Weaken NYC Mayor
Regional 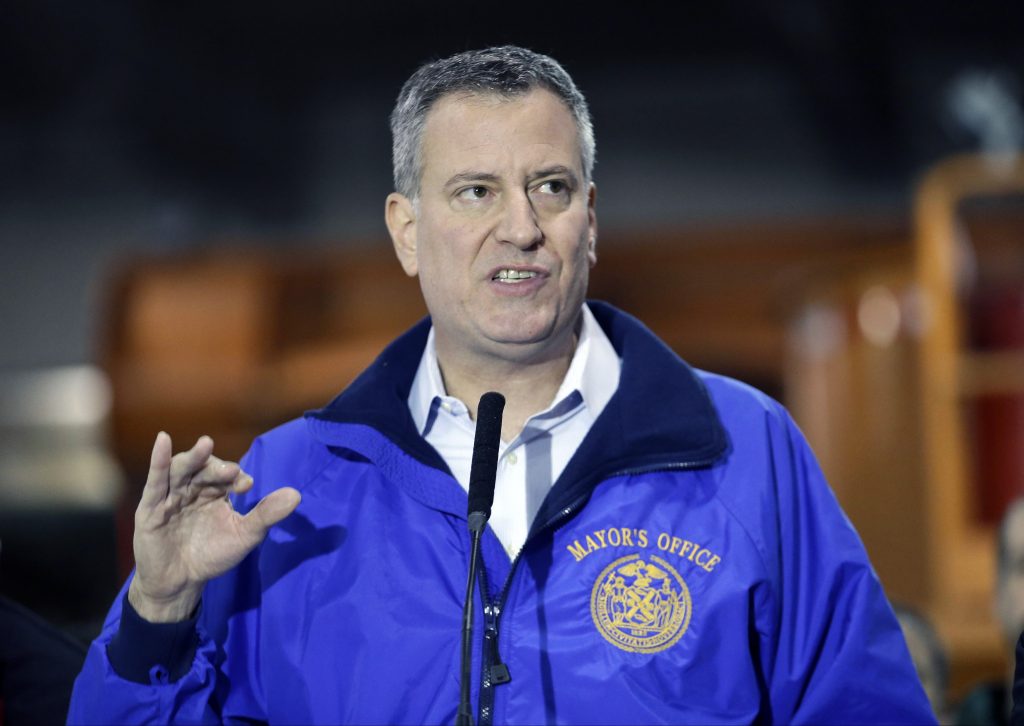 A political adage holds that “you can’t beat someone with no one.” New York Mayor Bill de Blasio may test it.

As the first-term Democrat prepares for a 2017 re-election campaign, he has been linked to at least five investigations into allegations that he has doled out pay-to-play favors to donors. His poll numbers are down and his feud with Democratic Gov. Andrew Cuomo continues unabated. Though his allies say they’re standing behind him, former Mayor Michael Bloomberg’s campaign manager has begun an effort to unseat him.

In a city where Democrats outnumber Republicans more than 6-to-1, de Blasio says he’s not worried and will win as the city experiences higher employment and lower crime. Elected in 2013 with the highest margin of victory of any non-incumbent in New York history, he has slid in recent polls to where most voters don’t want him re-elected, making him more vulnerable to a challenge within his party.

“It would take a real disaster for him to be a one-term mayor,” said Frank Seddio, the Democratic chairman in de Blasio’s home turf of Brooklyn. “Yet, it seems like there’s nothing he can do right. That’s part of the problem. He’s waged battles and lost, and there’s an old saying, ‘You don’t wound the bear, you have to kill it.’”

The 55-year-old mayor waged one of those fights within weeks of assuming office in 2014, raising more than $1 million to campaign for a Democratic state Senate majority that would support his urban-aid agenda.

Not only did his effort fail, but it also spawned an investigation by the U.S. attorney for the Southern District of New York and the Manhattan District Attorney’s Office after an elections official questioned how money was channeled to candidates. De Blasio suggested the state elections official had referred the matter to prosecutors out of loyalty to Cuomo, an allegation he couldn’t prove. When the governor demanded an apology, de Blasio refused.

The fraught relationship between de Blasio and the governor publicly erupted a year ago with de Blasio describing Cuomo to City Hall reporters as vindictive and revengeful.

The fight with Cuomo, and the effort to unseat the Senate majority, probably undermined de Blasio’s ability to persuade the legislature and governor to give him multi-year control of city schools and to win favorable tax treatment for developers to build affordable housing, said Seddio, who said he continues support the mayor.

“People had warned the mayor not to run afoul of the governor,” Arzt said. “It’s a dangerous game.”

Another probe focuses on the Campaign for One New York, a $4 million nonprofit de Blasio said he created to support policies such as affordable housing and universal pre-kindergarten. The mayor closed it in March, saying its work had been accomplished. Now federal and state prosecutors are investigating whether unions and real-estate developers who donated to it received favors from the administration.

State Attorney General Eric Schneiderman has said he’s looking into why the administration lifted a deed restriction requiring a building on Manhattan’s Lower East Side to be used as a nonprofit nursing home. The action netted developers more than $70 million after they sold it for luxury condominiums. Their lobbyist, James Capolino, is a longtime de Blasio supporter and fundraiser. The mayor, describing himself as “livid that this happened,” has denied knowledge of the deal and says he’s trying to reverse it.

“His future is clouded by these investigations, everyone is waiting for another shoe to drop,” Arzt said. “He’s got a year and a half to show voters he’s got a steady hand on the wheel. He’s vulnerable, but that’s very different from being beatable.”

Indeed, Seddio vowed that “the mayor will never lose my support.” Seddio would act to block two oft-mentioned potential Brooklyn-based Democratic challengers to de Blasio — U.S. Rep. Hakeem Jeffries and Borough President Eric Adams — from running against the mayor, Seddio said. Each has denied interest in a 2017 mayoral candidacy.

Yet the sheer volume of probes encouraged Tusk, a political consultant, to start a website aimed at defeating de Blasio in 2017, even without enlisting a candidate. Tusk says he’s not acting on behalf of his former boss, who is founder and majority owner of Bloomberg News parent Bloomberg LP.

Tusk said his strategy is to target de Blasio with negative research broadcast online and leaked to the media.

“With so few people voting in a primary, if you mobilize 10 percent more voters you could easily swing the race,” Tusk said.