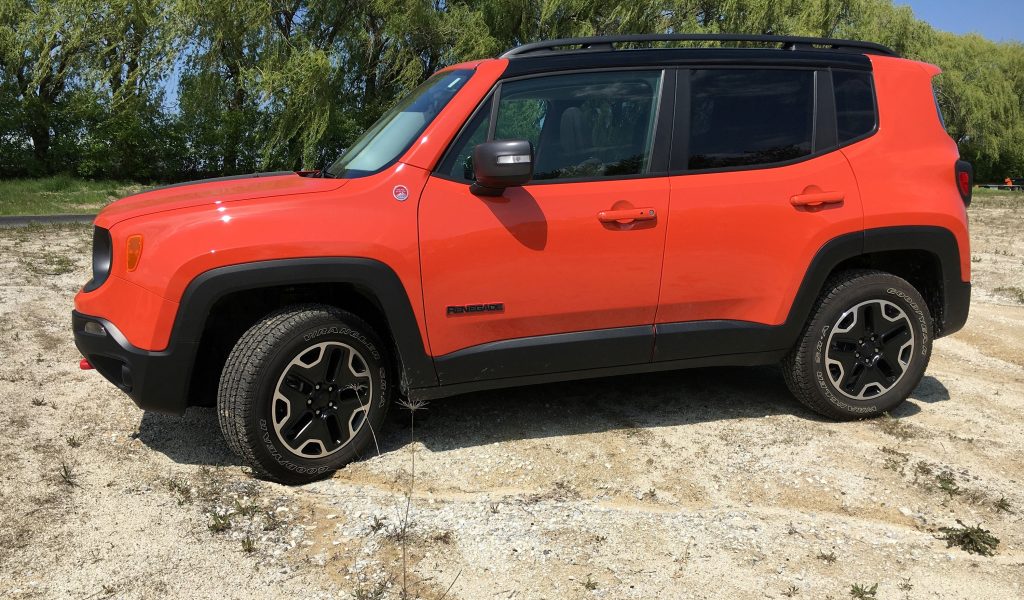 I had a friend who drove a soft-top Jeep Wrangler TJ all across the country all through our itinerant 20s. Loud, unruly, inefficient and mindlessly fun, it was a perfect symbol for our wayward youth.

A decade or three removed, I thought of that Wrangler while driving the Jeep Renegade, which is smarter, safer, and more secure in its direction. The grille, headlights and boxy style are all Wrangler-inspired, and the tester’s bright Omaha Orange color was a nod to the 1976 CJ5.

Renegade is a more refined Jeep, more versatile than rugged, yet it’s still a hill of fun.

Renegade was launched for model year 2015 on the crest of a wave of subcompact crossovers landing in the North American market. The Trailhawk-rated version is the only cute ute with any legitimate off-road capability.

Most importantly, this global-market vehicle feels and looks like a Jeep, even without all the kitschy brand heritage reminders, from the grille-shaped speakers to the shovel-shaped grab handle and the X-ed out taillights.

In steep, muddy, and rocky courses at Road America in Elkhart Lake, Wis., and the Autobahn Country Club in Joliet, Ill., the trail-rated Trailhawk was able to keep pace with the Wrangler, despite smaller wheels, arches and a shorter ground clearance of 8.7 inches, same as the Cherokee midsize SUV. It’s no Wrangler; it dips its small wheels in, more than plowing through, but the 4 x 4 gets the job done.

There are five drive settings, including mud, snow, sand and rock in a dynamic four-wheel drive system Jeep calls Selec-Terrain. It can be used in normal road surfaces with snow or wet conditions to minimize spinouts and to start in second gear so the wheels won’t make a rut when taking off.

The Active Drive 4 x 4 Low system specific to the Trailhawk models lets the Renegade crawl over rocks and other uneven terrain due to all sorts of engineering wizardry. The brake-lock differential, for example, stops one wheel from spinning and delivers all the torque in that axle to the wheel that is planted. So long, log blocking the road.

Hill descent is another magical function that, once activated, will overtake the gas and brake pedals. It’s a leap of faith, especially teetering over a rocky descent, but so is any complex mechanics. The driver can brake if he feels the need to do something other than steer.

The little buddy with the 2.4-liter Tigershark engine churns out 177 pound-feet of torque, and can tow up to 2,000 pounds, good enough to lug the ATV or Harley. It’ll also turn those two red tow hooks on the front, or the one on the rear, into a rescue device instead of just a cool visual component. .

The wizardry doesn’t stop once the Trailhawk is back on the road. Because it’s wiser than the Wrangler, the rear axle disconnects from the powertrain when it’s not needed. Sounds ominous, but it’s a fuel-saving device reverting the Renegade to a front-wheel drive vehicle that is more efficient, smoother and quieter. Paired to a nine-speed transmission that initially gave FCA all kinds of trouble in the Jeep Cherokee, the four-cylinder engine is good enough to deliver 24 mpg combined, which is one of the worst for a subcompact crossover but the best for a Jeep. Trade-offs are so adult.

All this sophisticated mechanical capability means owners should be on good terms with a Jeep service center, who must be among the few who can fix problems should they arise.

Keeping with Jeep’s manual, hands-on heritage, the tester came with twin removable roof panels known as My Sky. The two panels over both rows of seats are like lengthwise T-tops, except the safety engineers made sure it was a two-handed operation so fun-seekers wouldn’t be removing the panels while on their way to the beach. A key (best stowed in the glove box) unlocks the panel, then a latch pops it free. You could theoretically remove it from a seated position, but it’s best to stand on the door sill and remove it from the top. A padded storage bag in the back keeps the panels secure, though it does limit how much you can stuff in the small cargo area.

The 60/40 rear seats provide plenty of space, and for solo adventurers the front passenger seat folds forward for stowing long boards and other gear. The black cloth seats with red stitching are easy to clean.

One last cute ute feature on the interior is the dual vents positioned like eyes above the backup camera. Many have called it WALL-E, the titular robot compactor that only Pixar could make cute, and you just may find yourself giving its “head” a pet or two before leaving the vehicle.

The Renegade Trailhawk is great for people who don’t need the regular ruggedness of a Wrangler, but who are still tempted to detour off the road well-traveled into the unknown.

Parting shot: Fun like a Jeep, convenient as a crossover