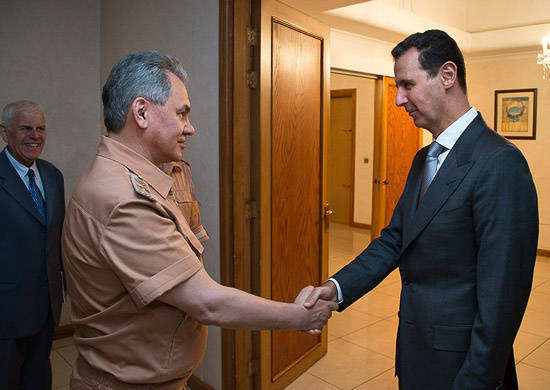 Russia’s defense minister visited Syria on Saturday to meet the country’s leader and inspect the Russian air base there, a high-profile trip intended to underline Moscow’s role in the region.

Sergei Shoigu met with President Bashar Assad in Damascus for talks that focused on cooperation between the two militaries and “some aspects of cooperation in the fight against terrorist groups,” the Russian Defense Ministry said. It said Shoigu held talks with Assad on orders from President Vladimir Putin.

The visit comes a day after President Vladimir Putin suggested that some in the Syrian opposition could join the Cabinet to help advance the stalled peace process.

Shoigu also visited the Hemeimeem air base in the coasvival province of Lattakia, where he met with pilots and inspected their quarters, according to the Defense Ministry’s spokesman, Maj. Gen. Igor Konashenkov.

Russia has conducted an air campaign in Syria since last September, helping Assad’s forces win back some ground. Putin pulled back some of Russia’s warplanes in March in what he described as a move to help encourage peace talks, but the military has maintained a strong presence at Hemeimeem.

A U.S.- and Russian- brokered cease-fire that began on Feb. 27 has helped reduce hostilities, but fierce fighting has continued in many areas, particularly around Aleppo. The Islamic State terror group and the al-Qaida branch in Syria, the Nusra Front, have been excluded from the truce.

Fighting around Aleppo and other areas in Syria has escalated in recent weeks, and Russia has recently issued an ultimatum for the U.S.-backed opposition units to leave Nusra-controlled areas or face air strikes, but later agreed to give more time for them to pull out.

Russia and the U.S. have traded mutual accusations over the truce. The U.S. accused Moscow of failing to prevent violations by Assad’s forces, while Russia criticized the U.S. for its failure to encourage opposition groups it backed to pull out from areas controlled by Nusra.

“Russia’s continued strikes at At-Tanf, even after U.S. attempts to inform Russian forces through proper channels of ongoing coalition air support to the counter-ISIL forces, created safety concerns for U.S. and coalition forces,” it said in a statement.

The video conference was held as part of bilateral communications channels intended to prevent incidents in the crowded skies over Syria.

The cease-fire is meant as a first step to a political solution that could end the civil war.

Putin said Friday that creating a new government that will have the trust of most of Syria’s population is key to ending the five-year conflict. He said that this goal can be achieved only through drafting a new constitution and holding new elections.

The Russian leader also welcomed what he described as a U.S. proposal to “think about incorporating some opposition representatives in the existing government structures, including the Cabinet.” Putin added, however, that it would be “unrealistic” to expect that such a Cabinet would effectively take over power from Assad.

Russia has staunchly backed Assad throughout the five-year Syrian conflict that started as an uprising against the Syrian ruler and morphed into an all-out civil war.

The Defense Ministry said that Shoigu discussed the current operations with the top Russian military commander in Syria, Col. Gen. Alexander Dvornikov. The minister ordered the Russian Reconciliation Center at the base to intensify contacts with local administrations and militants to encourage them to join the cease-fire, Konashenkov said, adding that Shoigu also instructed increasing humanitarian assistance to civilians.

Shoigu also inspected the S-400 air defense missile systems protecting the base in the coastal province of Lattakia.

The military has deployed the powerful long-range missiles after a Turkish fighter jet downed a Russian warplane at the Syrian border last November, vowing to fend off any threat to its aircraft.

The Russian military has reported 10 casualties in Syria since the campaign’s start: seven Russian servicemen died from enemy fire, two were killed in a helicopter crash and one killed himself.