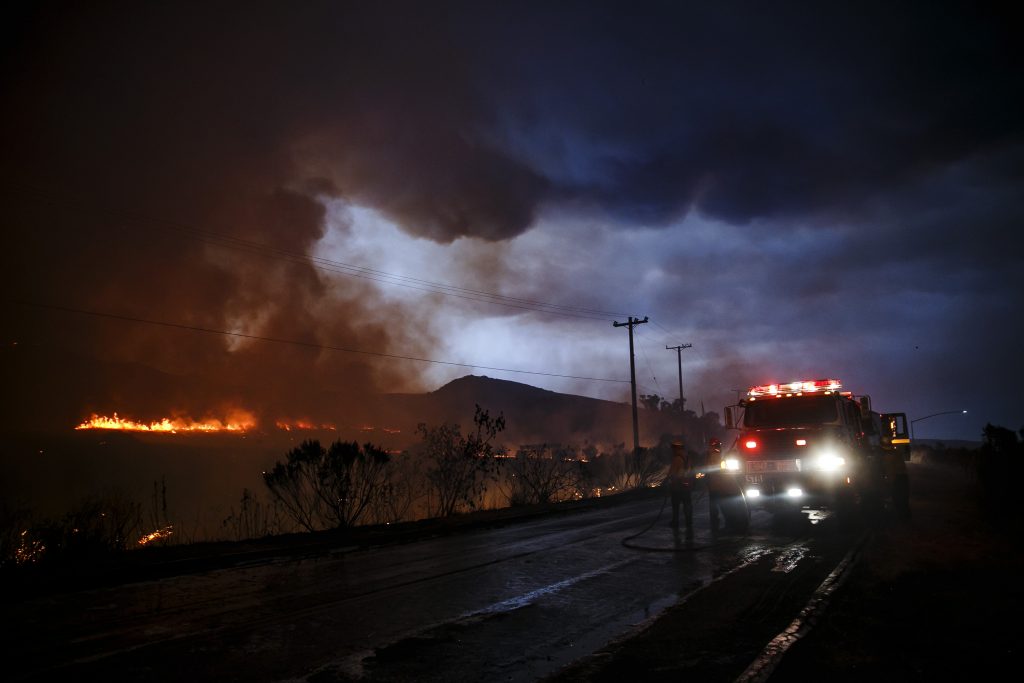 The fire started smoldering Wednesday afternoon off a curvy mountain road in the coastal hills north of Santa Barbara.

Then, infamous “sundowner” winds started blowing fiercely, and the Sherpa fire suddenly exploded. Authorities frantically shut down the 101 Freeway and evacuated hundreds of homes within 15 miles of the blaze, which was being pushed by 50-mph gusts.

The fire was able to move so far because it was racing through overgrown hillsides and canyons that had not burned in more than 60 years.

“Those grasses are like chest-high, really set to go off. They quickly go from green to brown to black,” said Andrew Madsen, a spokesman for Los Padres National Forest. “We may just be seeing the beginning of that.”

The state is in its fourth year of drought, and officials say the Sherpa blaze is a grim omen for what could be a summer and fall of fire.

So far this year, wildfires have burned more than 30,000 acres on state and federal land. That is about equal to or slightly higher than the same period in 2015, a particularly destructive year of fire that burned 307,598 acres and hundreds of homes and left at least nine people dead.

“You add a little bit of wind, and these continued drought conditions and fires are going to threaten more homes and do more damage and take more resources,” said Daniel Berlant, a spokesman for the California Department of Forestry and Fire Protection.

Firefighters are going to be on alert this weekend as a heat wave hits Southern California, bringing triple-digit temperatures through Monday. Forecasters said the conditions will further dry parched brush, heightening the fire risk.

The last heat wave, a few weeks ago, helped fuel a dangerous fire in the Calabasas area that forced thousands to flee their homes and damaged several properties. The blaze exploded after temperatures in the area spiked 10 to 20 degrees.

While Southern California experienced a bone-dry winter and spring, parts of Northern California saw significant rain and snow. But those factors don’t necessarily offer a guide to the fire season ahead.

In Central California, experts have said heavier rainfall might have actually heightened the fire danger because hillside grass has grown taller. In the Sierra Nevada foothills, a big risk lies with the 29 million trees dying or infested with bark beetles.

The National Interagency Fire Center forecast that the Central Valley might have a more active fire season, in part because of the worsening beetle infestation.

In Santa Barbara, firefighters and residents were playing a waiting game. For the next few days, they are at the mercy of the sundowner winds.

The sundowner effect can be so destructive because of the violent clash of hot air from the Santa Ynez Mountains and the cool air off the Pacific Ocean.

During the day, the fire has somewhat predictable patterns, following topography. But when the sundowners arrive with sunset, the fire can become unpredictable and grow rapidly.

The fire had burned at least 1,700 acres with zero containment as of Thursday evening.

Residents of the area are all too familiar with the devastation these powerful winds can bring. In 1990, aided by strong winds, the Painted Cave fire burned 5,000 acres in three hours and destroyed 427 homes. In 2008, sparked by a smoldering bonfire on a ridge line overlooking Montecito, the 1,940-acre Tea fire damaged 219 homes.

The blaze is burning on the western face of the Santa Ynez Mountains, a swath of forest that hasn’t been touched by flames since the devastating 1955 Refugio fire that burned for 10 days, scorching 77,000 acres.

“That’s a result of the increasing urban population living closer to the forest and our need to suppress a fire as soon as we get the call,” Madsen said. “It hasn’t had the natural burn cycle that existed before.”

“It’s just kind of marching around up there,” he added.