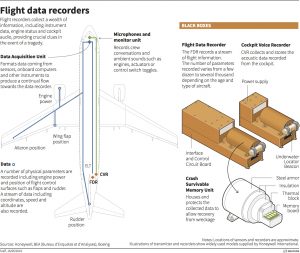 A second flight recorder has been retrieved from the crashed EgyptAir flight MS804, containing data from aircraft systems that could shed light on what brought the plane down last month, Egyptian investigators said on Friday.

An Egyptian committee investigating the crash in the eastern Mediterranean Sea, which killed all 66 people on board, announced the find a day after search teams located the cockpit voice recorder.

The two black box recorders are crucial to explaining what went wrong on the Airbus A320, which crashed early on May 19 on its way from Paris to Cairo.

The Egyptian Ministry of Civil Aviation said that investigators had received the two flight recorders and will analyze the information over weeks.

No group has claimed responsibility for bringing down the plane, but Egyptian investigative sources have said that it was too early to rule out any causes, including terrorism.

If intact, the cockpit recorder should reveal pilot conversations and any cockpit alarms, as well as other clues such as engine noise. But crash experts say it may provide only limited insight into what caused the crash.

Preserved in water to prevent oxidization until it can be opened in controlled conditions, the data recorder now on its way to Alexandria greatly increases the chances that the cause can be discovered, as long as its chip is intact, experts say.

To unlock the evidence, investigators will remove the chip from a protective sleeve, clean it and inspect it for damage.

While no explanation for the disaster has been ruled out, current and former aviation officials increasingly believe the root of the crash lies in the aircraft’s technical systems, rather than deliberate sabotage.

Investigators will also examine the digital records of pilot commands and, if available, the tape of their conversations to try to replicate what they understood and how their actions affected any technical problems.