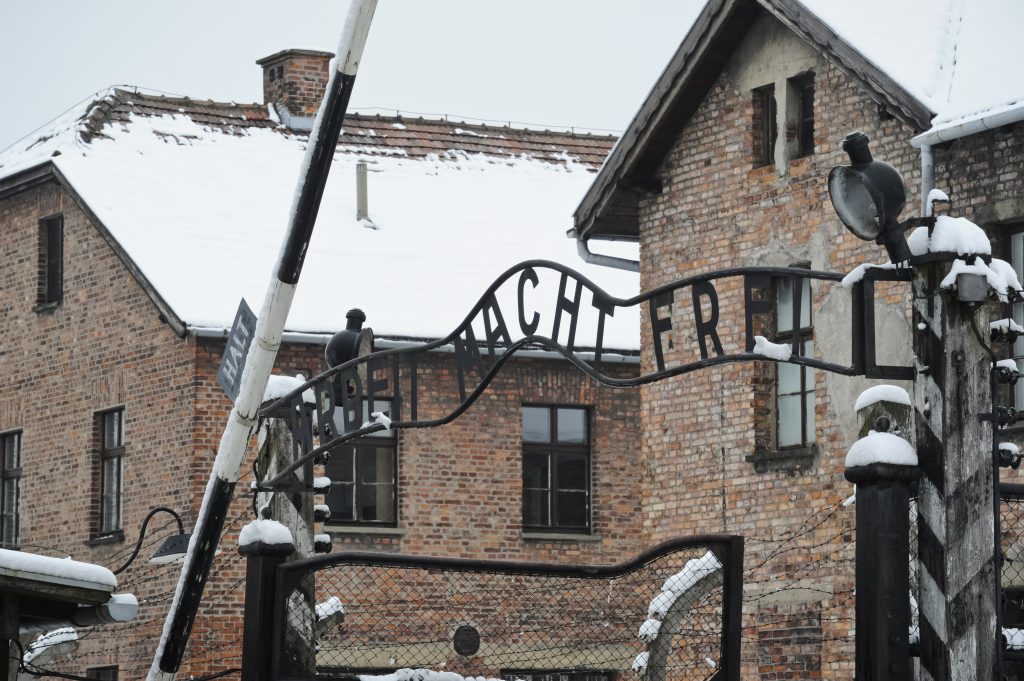 A 94-year-old former Auschwitz guard was sentenced to prison in Germany on Friday by a judge who branded him a “willing and efficient henchman” in the Holocaust.

Reinhold Hanning was convicted of being an accessory to the murder of at least 170,000 people at the concentration camp in Nazi-occupied Poland. Rejecting the defense argument that the former SS officer had never killed, beaten or abused anyone himself, Judge Anke Grudda said Hanning had chosen to serve in the notorious death camp and had helped it run.

“It is not true that you had no choice; you could have asked to be transferred to the war front,” Grudda told Hanning as she read out the verdict.

She said it was impossible that he had been unaware of the murders since he spent two-and-a-half years at the camp and had been promoted twice during that time.

“That shows that you had proven your value as a willing and efficient henchman in the killings,” Grudda said.

The white-haired Hanning, dressed in a grey suit and tie and seated in a wheelchair, listed to the verdict impassively. His lawyer, Johannes Salmen, said they would appeal.

During the 20-day trial that dragged on over four months, the court heard testimony from around a dozen Holocaust survivors, many extremely elderly, who detailed horrific experiences, recalling piles of bodies and the smell of burnt flesh in Auschwitz.

One of them, Hedy Bohm, 88, whose parents perished in Auschwitz, said, “I am grateful and pleased to be here at this moment, when justice was finally done after 70 years.”

With tears in her eyes, she told reporters after the hearing, “My murdered mother and father can perhaps rest in peace. It’s a dream I never dreamed to come true.”

“Today’s verdict is very clear: (Hanning) was complicit in mass murder. He was part of a merciless killing machine,” said Ronald Lauder, president of the World Jewish Congress.

“Without the active participation of people like him, Auschwitz would not have been possible.”

Hanning was silent and emotionless for much of the trial, but spoke at the end of April, apologizing to the victims and saying that he regretted being part of a “criminal organization” that had killed so many and caused so much suffering.

“I’m ashamed that I knowingly let injustice happen and did nothing to oppose it,” he read from a prepared speech.

Hanning was not charged with direct involvement in any killings. But prosecutors and dozens of joint plaintiffs from Germany, Hungary, Israel, Canada, Britain and the United States said he had helped Auschwitz function.

A precedent was set in a similar case in 2011, when camp guard Ivan Demjanjuk was convicted. Last year, Oskar Groening, known as the “bookkeeper of Auschwitz,” was sentenced to four years for being an accessory to the murder of 300,000 people.

None of the convictions are definitive. Demjanjuk had appealed but died before the German Federal Court of Justice could rule on the case, and the court is still considering an appeal filed by Groening.

Germany is holding what are likely to be its last trials linked to the Holocaust, when the Nazis killed more than six million Jews in a deliberate plan of extermination.

Besides Hanning, one other man and one woman in their 90s are accused of being accessories to the mass murder at Auschwitz. A third man who was a member of the Nazi SS guard team at Auschwitz died at the age of 93 in April, days before his trial was due to start.