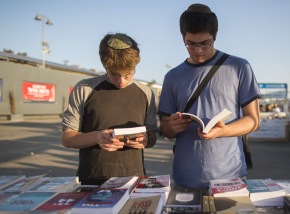 Already among the world’s best-read nations, Israelis are reading more than ever, data from the Central Bureau of Statistics showed. Released in advance of annual Book Week, the data showed that there was a 68.5 percent increase in the number of titles published in Hebrew between 2010 and 2014. In 2010, 5,261 titles were published, with that number jumping to 8,867 by the end of 2014.

Among all new titles, published sefarim concerning halachah were the most popular, accounting for nearly a quarter of titles published in 2014. The figure does not include reprints or new editions of existing works. Those were followed by literature (18 percent), books for children/youth (15 percent), modern Israeli history/contemporary events (13 percent), education, (5.2 percent), and social science titles (4.7 percent).

Israel’s publishing scene is very diverse, with many independent players, the CBS numbers showed. The largest publishers (with 100 or more titles published a year) were responsible for 16.1 percent of the titles published, with the rest spread across hundreds of other smaller publishers.

Israeli children and youths are also avid readers. 38 percent of children age 7-18 read at least four hours a week, the data showed, while an additional 20 percent read between 5 and 9 hours a week. Higher education also plays a role in reading habits. 29 percent of households where an adult member has an academic degree have on average more than 200 books in their home libraries. Among high school grads with matriculation (bagrut) certificates, 28 percent had that many books, as did 19 percent of those who completed high school.