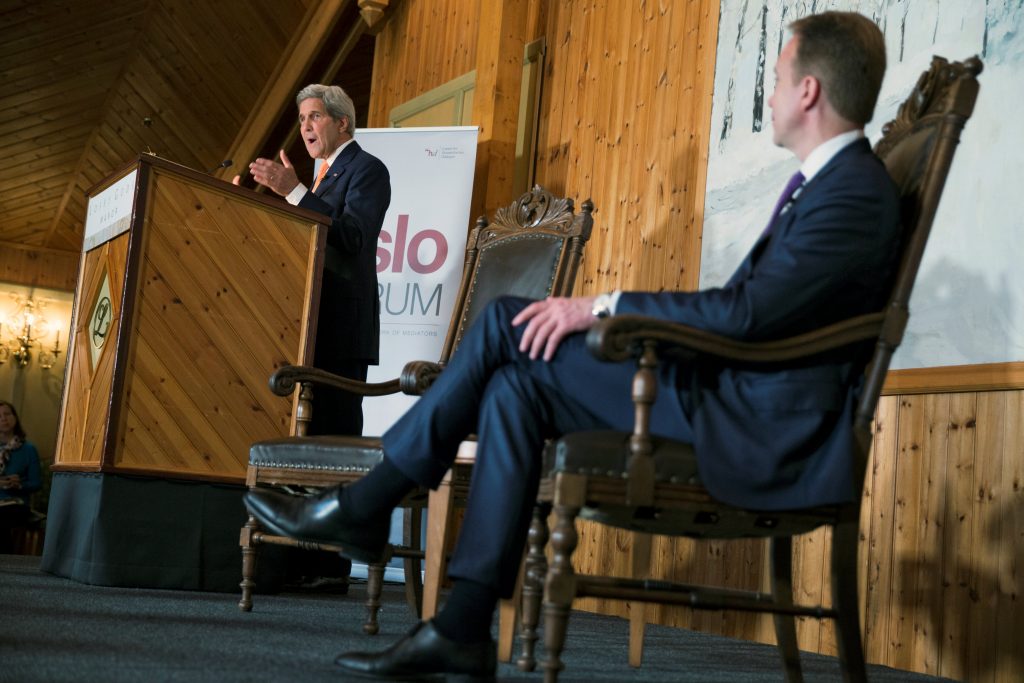 Speaking in Oslo, where he also met Iranian Foreign Minister Mohammad Javad Zarif for talks on Syria and the Iran nuclear deal, Kerry said Assad’s forces had not abided by the truce for a single day in Aleppo.

“Unless we get a better definition of how this cessation is going to work … we are not going to sit there while Assad continues to offensively assault Aleppo and while Russia continues to support in that effort,” Kerry told a news conference.

“The United States is not going to sit there and be used as an instrument that permits a so-called ceasefire to be in place while one principal party is trying to take advantage of it to the detriment of the entire process,” he added.

Earlier, Kerry said he was seeking ways to renew the “frayed” agreement and discussed it with Zarif, who had indicated “how this can be achieved.”

The February truce has largely collapsed and there has been little progress in negotiating a political transition that is supposed to begin on Aug. 1.

Backed militarily by Iran and Russia, Assad has shown no willingness to compromise, much less step aside to allow a transition Western powers see as the solution to the conflict.

At Wednesday’s meeting Zarif had “indicated to me possibilities of how this can be achieved,” Kerry said.

“It is very clear that the cessation of hostilities is frayed and at risk,” Kerry told delegates at the Oslo Forum near Oslo.

“Russia needs to understand that our patience is not infinite, and in fact very limited, with respect to whether or not Assad is going to be held accountable,” he said.

The opposition-held sector of Syria’s divided city of Aleppo has been cut off by an escalation of air and artillery strikes on the only road in, putting hundreds of thousands of people under effective siege.

A government campaign to fully capture Aleppo would most likely bury what little hope remains of reviving a diplomatic effort to end the five-year-old civil war, after talks and a ceasefire sponsored by the United States and Russia fell apart earlier this year.

Aleppo, Syria’s largest city with a pre-war population of more than two million people, has been divided for years into rebel and government sectors, and capturing all of it has been one of Assad’s biggest goals.

On the nuclear deal the United States and other major powers struck with Tehran, Iran has complained that concerns among banks about breaking remaining sanctions had deterred investment since the deal was signed in July. Washington says Iran needs to do more to make itself attractive to Western companies.

Kerry said the United States – and he personally – had gone to lengths to try to clear up misunderstandings among banks and businesses.

“If banks are reluctant of their own caution, or misunderstanding, then I think it is important for us to appropriately clarify things in a way that can allow what is entitled to happen,” Kerry said. “If you don’t do that then you wind up putting your very agreement at risk.”

“We are working hard to make sure banks know they are entitled to do business” in Iran, he said.