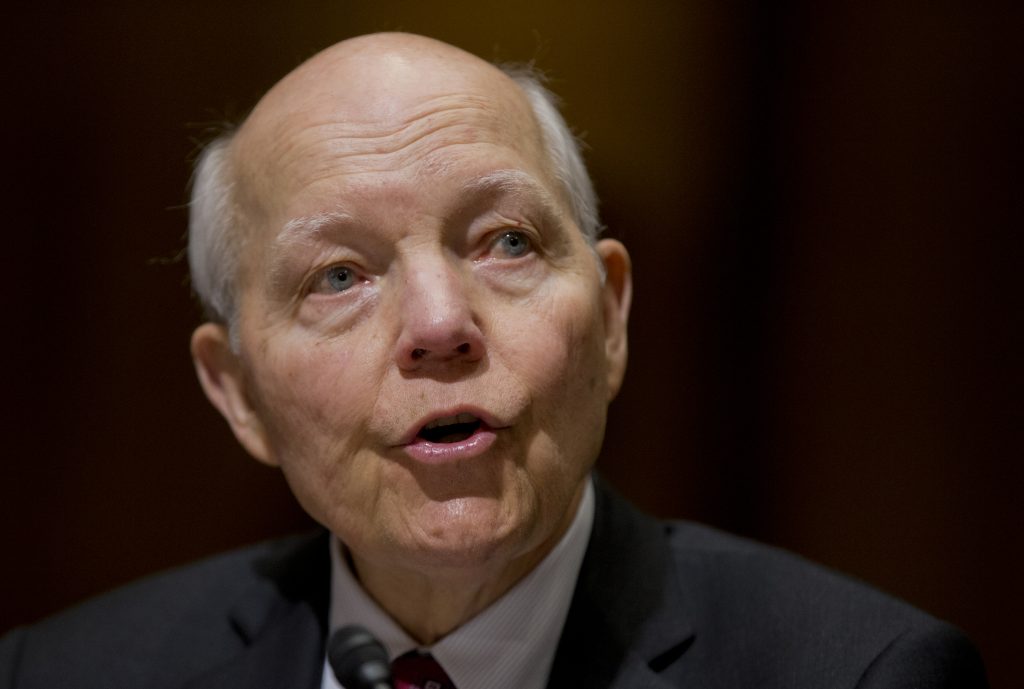 A divided House committee voted Wednesday to censure Internal Revenue Service Commissioner John Koskinen over Republicans’ claim that he obstructed their investigation into the agency’s treatment of conservative groups.

The party-line action by the Oversight and Government Reform Committee came after a protracted debate over what Koskinen knew, when he should have disclosed it to Congress and whether he lied about thousands of lost emails at the center of a still-explosive scandal. The 23-15 vote, with Republicans in the majority and two members absent, was the party’s first victory in a long effort to oust the tax collector.

Ever since the IRS was forced to acknowledge in 2013 that it gave improper scrutiny to conservative groups seeking tax-exempt status, House Republicans have held the agency, unpopular with many of their constituents, political hostage. They hope the censure vote, which has no guarantee of being taken up on the House floor, will nonetheless be an overture to Koskinen’s impeachment, which would remove him from office.

“Mr. Koskinen, the government turnaround artist, has still done nothing to prevent Americans from being targeted,” the committee’s chairman, Jason Chaffetz, R-Utah, who has led the effort, told his colleagues before debate began on House Resolution 737, “Condemning and censuring John A. Koskinen, the Commissioner of Internal Revenue.”

“He will continue to lead the agency until November of 2017 unless we act,” Chaffetz said. “For these reasons, Mr. Koskinen should face the ultimate repercussion and be impeached. Censure is a good first step.”

If the resolution passes the full House, Koskinen would be required to forfeit his federal pension.

Democrats called the effort an embarrassment to Congress and the committee, which they said has managed, despite partisanship, to work together on important policy. They said a hard-working public servant who is 76 and came out of retirement to take over the IRS will have an unnecessary black mark on his record.

“You are totally wrong on this one,” Rep. Elijah Cummings, D-Md., the committee’s top Democrat, told Chaffetz. “After three years and $20 million, it is finally time to put this baseless conspiracy to rest. . . . Creating a hit list to knock off federal officials is not something to be proud of. It is a travesty.”

Democrats tried to push through several amendments to the censure resolution to correct what they called its erroneous allegations, adding language documenting that the Republican inspector general, the Justice Department and a bipartisan Senate Finance Committee found incompetence but no political motivation when it singled out conservative groups for scrutiny. The efforts were summarily shot down.

Koskinen, brought in by President Barack Obama in 2013 as the furor over the tax-exempt division grew, is charged with obstructing justice, misleading Congress and “betraying the trust and confidence of the American people.” The resolution says he failed to respond to congressional subpoenas for a trove of emails written by the former official at the center of the case, Lois Lerner.

Koskinen told lawmakers in June 2014 that 24,000 of Lerner’s emails had disappeared from the agency’s hard drive. The Treasury Department inspector general later reported that his staff had recovered some of the communications. Koskinen has denied the charges and said his claims that the emails were missing were based on what he knew at the time. Or as Cummings put it to Chaffetz: “You completely disregard the difference between a misstatement and lie.”

Koskinen was not invited to testify on his censure. However, he was invited and declined to testify at a hearing in May before the House Judiciary Committee, which is still considering a resolution to impeach him. Two presidents have been impeached, but no federal executive has since William W. Belknap, the secretary of war, in 1876.

House Republican leaders have not pledged floor votes on either proposal, which would be dead on arrival in the Senate.

But Wednesday’s vote was nonetheless a victory for the House’s right-wing caucus, which has made antipathy toward the IRS a cause célèbre. Over five years, House Republicans have slashed the agency’s budget, passed bills banning employee bonuses and prohibiting employees fired for misconduct from getting rehired. The GOP has vowed to simplify the tax code and assailed agency management failures.