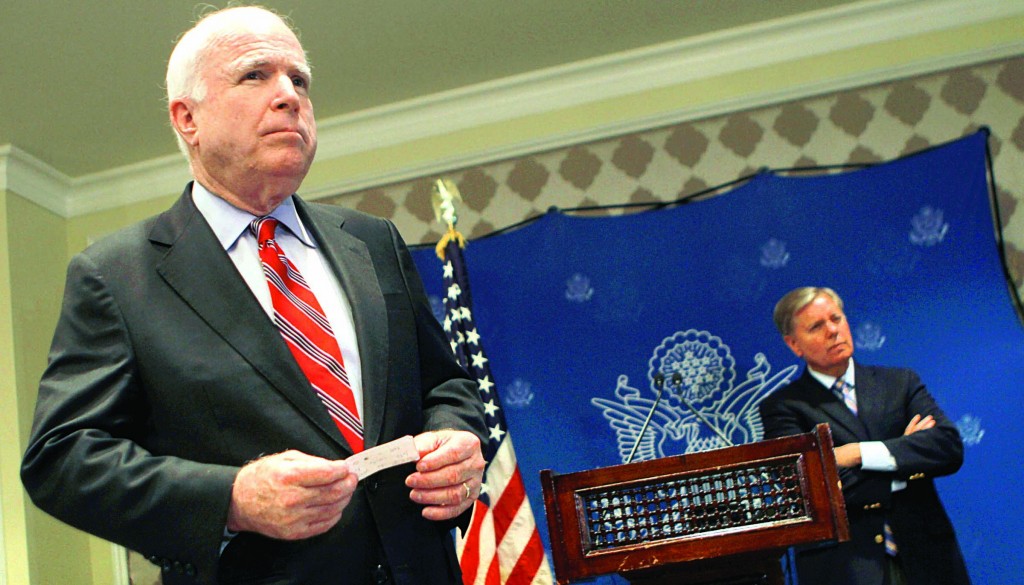 The Senate is scheduled to vote Tuesday on a $602 billion defense policy bill that the White House has said President Barack Obama will veto over numerous objections, including a prohibition on shuttering the prison at Guantanamo Bay, Cuba.

In addition to the ban on closing Guantanamo, the White House is opposed to provisions that would limit the size of the president’s National Security Council staff and block a new round of military base closings.

The bill must be reconciled with a version the House passed earlier this year.

Debate over potential amendments to the Senate legislation came to a halt late last week due to procedural disputes. The gridlock has left in doubt the future of a program that allows Afghan civilians in danger of being harmed or killed by the Taliban to resettle in the United States.

A measure that would have stripped a provision from the bill that compels young women to register for a potential military draft was also sidelined. The requirement has roiled social conservatives.

The National Defense Authorization Act is an annual piece of legislation that often serves as a vehicle for a broad array of issues, not all of which are specific to the Defense Department. More than 600 amendments were filed to this year’s bill, but only a handful have been considered because of what a senior lawmaker lamented as a breakdown in the way the Senate is supposed to operate.

Sen. John McCain, R-Ariz., the chairman of the Senate Committee on Armed Services, said Friday he’d become so frustrated that he would consider supporting changes to the Senate’s rules so that “one individual out of 100 can’t bring everything to a screeching halt.”

The difficulty started last week when Sen. Mike Lee, R-Utah, demanded a vote on his measure that would prevent the government from detaining indefinitely U.S. citizens apprehended on American soil for being suspected of supporting a terrorist group.

Lee refused to allow a vote on two other amendments, including one to extend and expand a program that gives visas to Afghans who defied the Taliban and sided with the American-led coalition, unless senators agreed to a vote on his.

But Sen. Lindsey Graham, R-S.C., a retired Air Force Reserves colonel, objected to Lee’s amendment. He said it could lead to terrorists being treated as criminals instead of enemy combatants. That would prevent U.S. intelligence officials from obtaining critical information because the suspects’ attorneys likely wouldn’t allow them to be interviewed.

The resulting stalemate effectively shut down debate on all amendments, leading McCain to warn of life-or-death consequences if the Senate failed to take up the Afghan visa program.

“By not allowing them to come to this country, they’re going to die,” McCain said.

The Afghans worked for the coalition as interpreters, firefighters and construction laborers. Without the option to leave Afghanistan, they and their families risk being harmed or killed by militants, the top American commander in Afghanistan has warned.

An amendment authored by Sen. Jeanne Shaheen, D-N.H., would extend the so-called special immigrant visa program through 2017 and authorize an additional 2,500 visas for the fiscal year that begins Oct. 1 to meet the growing demand.

In the House version of the defense bill, lawmakers refused to provide additional visas. The House extended the program for a year, but also narrowly restricted eligibility to Afghans whose jobs took them outside of a military base or secured facility.

The measure to expand the draft to women has sparked disagreement.

Women have never been required to register and have never been part of a large-scale draft. But McCain’s committee said any justification for barring them was erased last year, when the Pentagon lifted all gender-based restrictions on front-line combat units.

But Sen. Ben Sasse, R-Neb., wants to replace the provision with a study of whether a draft is even necessary. Sasse’s amendment would also do away with the Selective Service in three years unless a compelling case is made to preserve the draft.

“Why are we now fighting about drafting our sisters, our mothers, and our daughters into a draft that no one anywhere is telling us they need?” Sasse said.