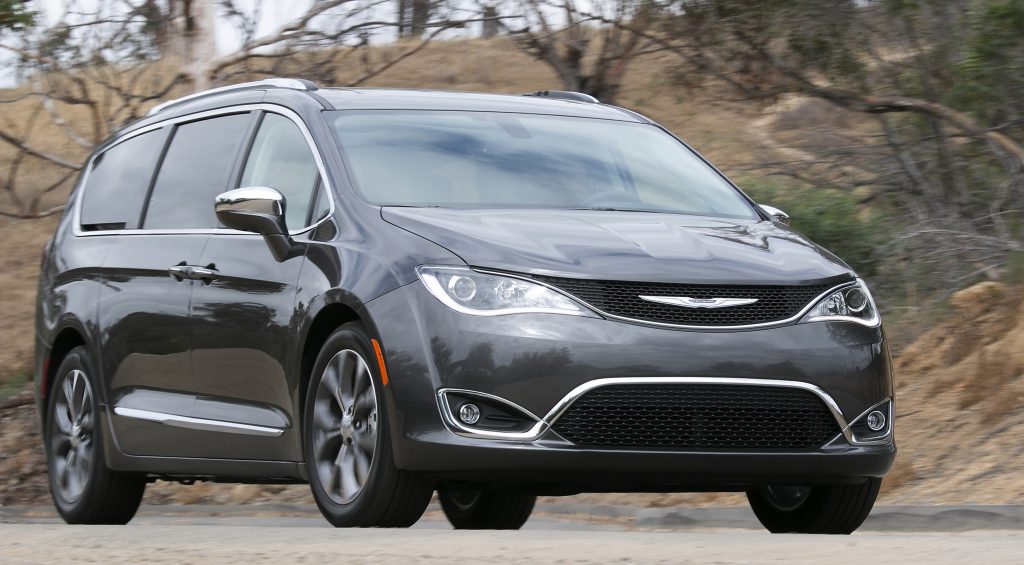 For the last several years, sport-utility vehicles and “crossover utility vehicles” have been the hottest-selling segments in the automotive world. But a lot of American families are still buying minivans. More than 500,000 of these multi-passenger people movers were sold last year — and about half of those were made by Fiat Chrysler.

The Detroit automaker has spent lots of time and money building and promoting its newest minivan offering: the 2017 Pacifica.

The vehicle got a huge launch when it was unveiled at the Detroit Auto Show this year.

There’s a lot to promote. The Pacifica is built on an entirely new platform, sharing only an engine, transmission and a few parts with other Fiat Chrysler automobiles.

Later this year it will be introduced in a plug-in hybrid electric version, the first minivan to be sold in the U.S. in that format. Sometime farther down the road it will be the vehicle that Google uses for its burgeoning autonomous driving program.

Chrysler boasts of inventing the American minivan craze, decades ago, and continues to do well with it. Chrysler’s Town and Country and sibling Dodge Grand Caravan currently trail Toyota’s Sienna and Honda’s Odyssey, but Chrysler’s brand director, Bruce Velisek, said: “We dominated this market for 30 years. It’s a good business for us.”

The Pacifica is a forward-looking expression of backward-looking body style. Its seven passenger seats are all comfortable and highly adjustable. The front ones are heated and cooled. The second row is fitted with twin entertainment screens, wireless headphones and remote controls — a $2,000 option — and those seats are heated too.

The two side doors slide open with the push of a button. The second-row seats slide forward to create access to the third row, and will also fold flat into the floor to create extra space. (When the seats are upright, the subfloor cubbies make a cool, hidden storage bin.) A third seat can be added to the second row to increase total seating to eight.

Another button opens or closes the rear gate. Yet another makes the third-row seats robotically disappear into the floor, opening up huge real estate that extends from the driver to the back bumper. (There’s no subfloor space wasted on a spare tire because the Pacifica doesn’t have one. You get a tire inflator kit instead.)

Because it’s a van, it has about 18 cupholders. But it also offers almost that many plug-ins for electronic devices, and an on-board vacuum cleaner.

I found the interior so luxurious and comfortable that I wasn’t sure whether I wanted to drive it or hang curtains and move in. Then I noticed there are side screens already attached. So I could just move in and use those for curtains.

For a big car — I’m not sure how big a minivan can be before you have to call it a van — the Pacifica is responsive. It’s powered by Chrysler’s 3.6-liter V-6 Pentastar engine — the same one found in the company’s 200 and 300 roadsters — which makes 287 horsepower and 262 pound-feet of torque. Mated to a nine-speed electronic transmission, the engine gets the Pacifica jumping fast off the line.

All that torque is fun. Without a full load, it’s lively in traffic and accelerates quickly. It passes without much urging and maintains freeway speeds comfortably.

But that power also creates some challenges. At parking lot speeds, the Pacifica surges and lurches a little. Trying to parallel-park on a hill is difficult, unless you’re driving a version equipped with the automated parking feature. I wasn’t. I had the version with an automatic braking feature. So every time I got close to fitting into my space, the Pacifica applied its own brake. After five tries, I gave up and parked farther down the road.

Once out of the parking lot or the parking space, the Pacifica is quite civilized. The suspension and steering are soft but not squishy. And it’s quiet, really quiet, with very little engine, air or tire noise even at freeway speeds.

The enormous sun roof gives the car a nice open feeling. But despite all the glass, the visibility to the rear and sides isn’t great. That’s partly because of the size and shape of the tall and wide second- and third-row seats. (That’s also why the Pacifica has a button on the dash that will drop the third-row headrests, which improves the rear visibility a bit.)

The driver’s area is tidy. Chrysler has used on the Pacifica the same rotary transmission switching it uses on many of its other vehicles. So there’s no space wasted on P-R-N-D-L, on the steering column or the center console. There’s just a simple dial on the dash, below the navigation and entertainment screen, for choosing gears.

All this power, luxury and robotic technology don’t come cheap. The base price for the entry-level Pacifica is just over $29,000. But the Limited version we tested, with extras like fancy wheels, DVD player and wireless headphones, costs $46,655.

A loaded plug-in hybrid version, when it arrives, will cost more, though Chrysler hasn’t released pricing yet.

It will save on gas, though. The company says the hybrid will have an all-battery range of 30 miles before the gas motor kicks in, and will get the equivalent of 80 miles per gallon — well above the 22 mpg combined city/highway rating for the gas-powered Pacifica.

It’s probably not the last hybrid minivan coming from Chrysler. When I asked Chrysler’s Velisek about that, he pointed out that the Pacifica and the Dodge Grand Caravan are built in the same plant. Draw your own conclusions.

Velisek said Pacifica buyers are people who already own minivans and people who are trading in SUVs and CUVs — despite the dowdy image of a minivan, much as the station wagon was derided a generation earlier.

Yet I love minivans and vans of all kinds. And my own children grew up in a succession of Dodge Caravans, Plymouth Voyagers and Honda Odysseys.

If I were raising kids again today, they might wind up in one of these.

Lows: Pretty big for a minivan, isn’t it?