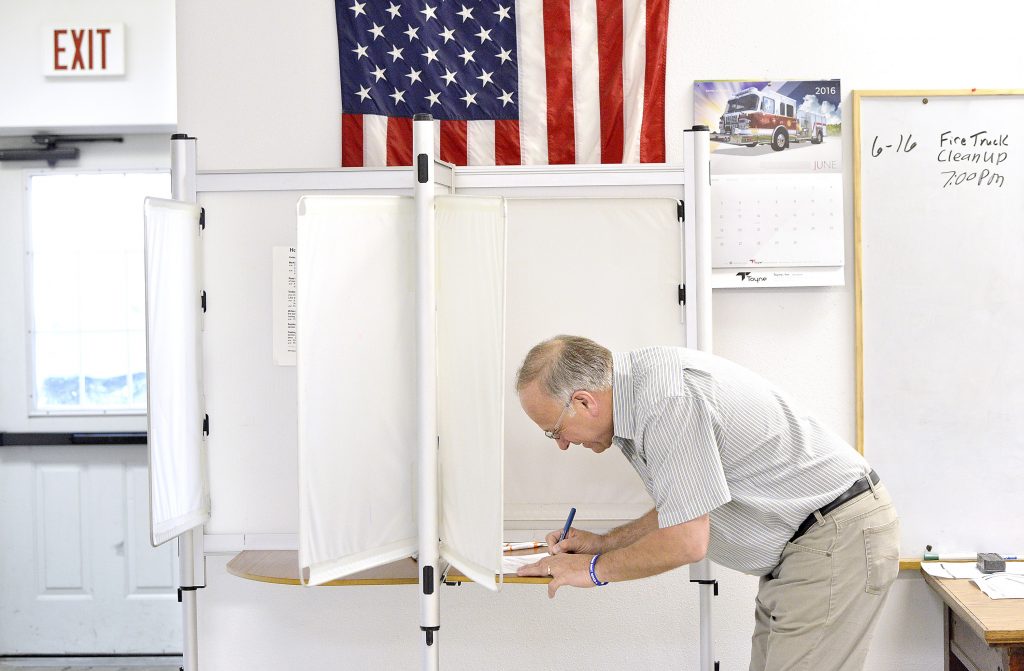 With a splash of history and a dose of reassurance, Democrat Hillary Rodham Clinton and Republican Donald Trump claimed their parties’ presidential nominations and are turning their political guns on each other.

Clinton claimed her place in history as the nation’s first woman ever assured a major party’s presidential nomination. Trump seized the chance to speak in more unifying, substantive tones as Republican leaders have demanded in recent days.

And for Bernie Sanders, Tuesday’s contests offered the chance to cap a remarkable and resilient campaign to level the American playing field — one that vexed the Clinton armada for a solid year. But Tuesday’s contests gave Sanders a new taste of victory, and he said he wasn’t yet done.

Political mathletes get to stand down after the final contest of the primaries in District of Columbia June 14.

Here’s a look at how Tuesday’s contests unfolded:

The evening offered 694 Democratic delegates up for grabs in New Jersey, California, Montana, New Mexico, North Dakota and South Dakota. The District of Columbia, which offers 20 delegates, is the last to vote.

As Tuesday turned to Wednesday, Clinton won four states while Sanders took Montana and North Dakota. Clinton’s win in the primary in California delivered a devastating blow to Sanders. The Vermont senator had pinned his hopes of a comeback on a strong finish in California, but the loss in the nation’s largest state is all but certain to hasten the end of his White House campaign.

On the Republican side? That’s all, folks.

The ferocious 17-way battle for the GOP nomination ended quietly Tuesday with the contest’s final votes in five states (there was no GOP contest in North Dakota). Trump is the only remaining GOP candidate.

Technically, it’s still not over on either side. Neither Clinton nor Trump will be their parties’ official nominees until the formalities of the delegate votes at the parties’ national conventions. Associated Press counts of Republican and Democratic convention delegates have found enough support to assure Clinton and Trump their parties’ nominations.

Why It Matters for Clinton

This time, Clinton got the celebration she’d hoped for in 2008 — and by many accounts, long before that.

Emotional from the moment she stepped onstage at the Brooklyn Navy Yard, Clinton made clear she considers the competition with Sanders over and delivered yet another broadside against Trump.

The speech was also notable for its timing: The event comes on the eight-year anniversary of Clinton’s concession speech to then-Sen. Barack Obama, in which she noted her campaign hadn’t breached “that highest, hardest glass ceiling” but that barrier now had “about 18 million cracks in it.”

She’s now assured of crossing a boundary as the first woman to win the presidential nomination of any party. How she proceeds toward Election Day begins with mending the stubborn split between her supporters and Sanders’ — and depends significantly on how well she learns a bracing lesson he taught her: Young people, especially young women, flocked to him in the primaries.

The occasion also opens the gates to flashy endorsements. House Democratic Leader Nancy Pelosi didn’t wait for the votes Tuesday to announce her support. There’s a bigger endorsement on the horizon from President Obama, followed by joint appearances.

Why It Matters for Trump

The contests Tuesday gave the billionaire mogul a high-profile way to pivot from several difficult days in which members of his own party nearly unanimously ordered him to cease his criticism of an American-born judge based on the jurist’s ethnicity.

In his victory speech, Trump spoke of new beginnings.

“We’re only getting started, and it’s gonna be beautiful,” Trump said at his golf course in Westchester County, N.Y., calling it an “honor” to lead the GOP. “I understand the responsibility of carrying the mantle.”

“Tonight we close one chapter of history and we begin another.”

He also spoke of issues — trade, economic prosperity and more.

His words were far closer to the tone and approach Republicans have been demanding in the weeks since Trump’s remaining rivals surrendered the contest — a sign, perhaps, that he was starting to turn away from the combative and impulsive style that served him well in the primaries and toward fulfilling his promise to unite the fractured party.

For at least one high-profile Republican, it was too late: Sen. Mark Kirk, who is in a tough re-election fight in Illinois, rescinded his endorsement of Trump. House Speaker Paul Ryan kept his but called Trump’s remarks about the judge “racist” and suggested that the mature thing for Trump to do would be to admit they were wrong.

That didn’t happen. But instead of attacking his critics, Trump offered signs he was turning a corner.

Obama called Clinton on Tuesday night to congratulate her for securing “the delegates necessary to clinch” the Democratic nomination.

But the president did not formally endorse Clinton. The president also called Sanders to praise him for shining a spotlight on economic inequality and energizing millions of voters.

The White House said Sanders requested a meeting with Obama. The meeting is scheduled for Thursday at the White House.

Regardless of how many GOP politicians come out against Donald Trump, the math says they can’t contest his nomination.

With his victories Tuesday, Trump now has at least 1,441 bound delegates who are required by party rules to vote for him at the convention. It takes 1,237 delegates to win the GOP nomination.

Trump also has public support from 95 unbound delegates, but they could possibly change their minds and switch to another candidate.

Several Republicans in Congress are criticizing Trump for saying a federal judge could not preside fairly over a case involving Trump University because of his Mexican heritage.

GOP Sen. Jeff Flake of Arizona said Trump’s comments could spur talk of a challenge at the convention.

For Sanders, Tuesday presented an opportunity to emerge from the race with significant gravitas in the Democratic Party and the Clinton campaign.

But first, he insisted he’s going to continue to fight for the working class and for low-income people in the remaining contest and perhaps beyond.

Sanders planned to travel to Vermont on Wednesday and head to Washington Thursday for meetings and a rally.

His campaign, meanwhile, sent out a fundraising email Tuesday evening urging supporters to help him finish strong June 14 in the District of Columbia contest.

And his North Dakota win gave Sanders a shot of good news amid Clinton’s celebration.