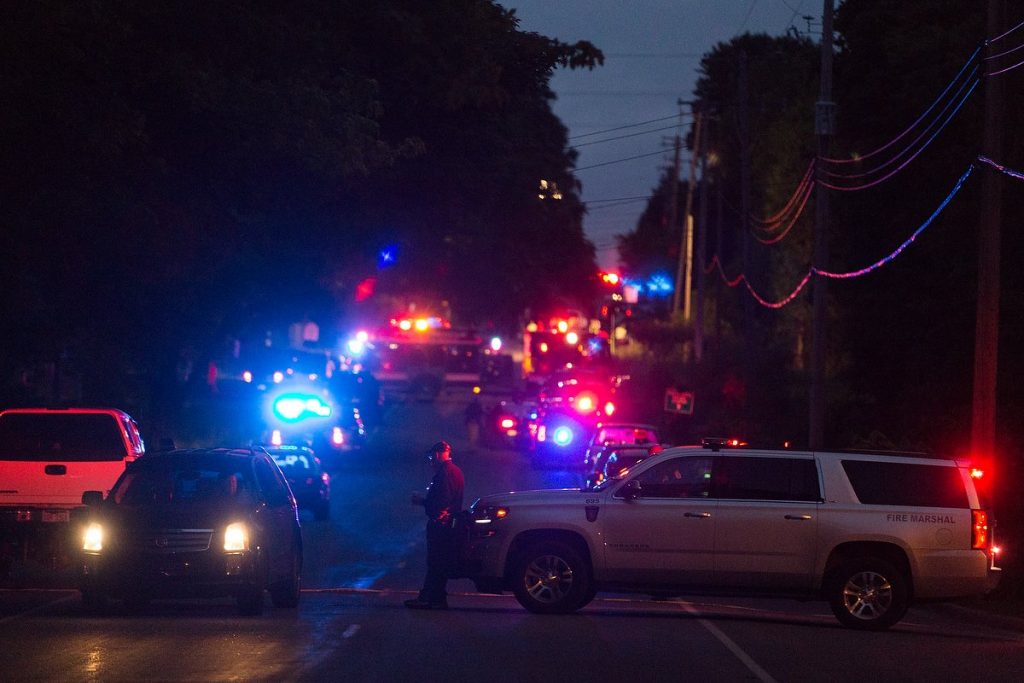 After driving through a group of bicyclists Tuesday, killing five and injuring four, a pickup truck on a two-lane road north of Kalamazoo looked “like it hit a brick wall,” a neighbor said.

“The hood was folded up to about the middle of the hood,” said Bob Coffman, 68, who lives across the street from the crash scene in Cooper Township. “I could see the bikes down there in the road, in pieces.”

He said Wednesday that he didn’t witness the crash, but he was home and helped the police search for a possible body. A bicycle with a back wheel “all busted and bent” had landed by a rock in his front yard, dozens of yards from the crash scene. They were concerned someone may have been ejected into the nearby foliage, but they didn’t find anyone in his yard.

Police said the pickup driver, a 50-year-old west Michigan resident, was in custody and a decision on possible charges would come likely on Thursday.

The five victims were pronounced dead at the scene, police said. Two of the people involved in the crash were being treated at Bronson Methodist Hospital in Kalamazoo, said spokeswoman Carolyn Wyllie. On Wednesday morning, she said the two were in serious condition.

Coffman said he sees that group, usually 15-20 cyclists, pass his house about two to three times per week, and they often wave when he’s outside.

The victims’ identities haven’t yet been released. A group of four bicyclists from a separate group stopped by the scene Wednesday morning to pay respects.

Bicyclist Bob Strader, 74, of Texas Township, said the stretch of two-lane road is one he prefers not to use.

“It’s too narrow a bike lane for safety, in my estimation,” he said, adding that there’s only about three feet of shoulder space for cyclists.

A flattened area of brush in a ditch Wednesday morning off the road’s northbound lane was marked by a cross and a bouquet of flowers, a makeshift memorial for the victims.

The northbound speed limit changes from 35 mph to 50 mph shortly north of the crash scene. Coffman said motorists often exceed the speed limit on the road segment, which slopes uphill. He said deputies recently had been watching the area and writing tickets.

Strader said he learned of the tragedy from the TV news Tuesday night.

“It’s heartbreaking to hear that sort of thing, ’cause it’s possible that I know some of the riders,” he said.

He also said two of the three people riding with him Wednesday morning have previously been hit by cars.

Bicyclist Carolyn Burns of Portage said she was hit by a car about five years ago, when its side-view mirror hit her on the back and broke off.