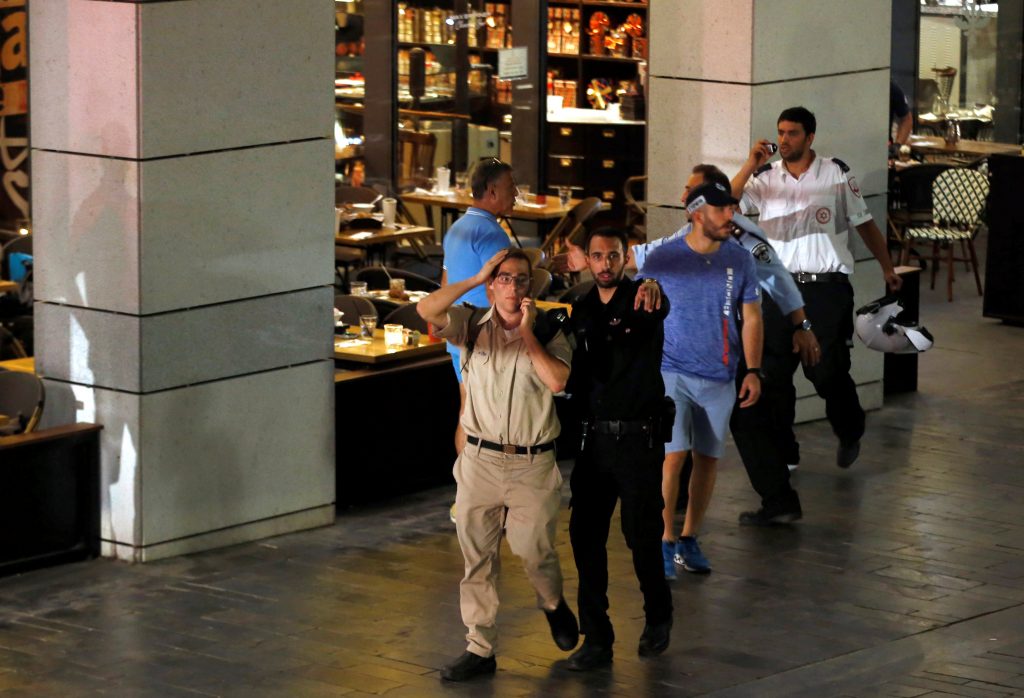 Two Palestinians opened fire at a restaurant at a popular open-air market in central Tel Aviv on Wednesday night, killing four people and wounding at least five others in one of the deadliest attacks in an eight-month wave of violence.

The shooting occurred at the Sarona market, a series of restored buildings that have been transformed into a popular tourist spot filled with crowded shops and restaurants. The complex is across the street from Israel’s military headquarters, known as the Kirya, and is often filled with tourists and young soldiers in uniform.

“Two terrorists opened fire at civilians,” Tel Aviv district police commander Moshe Edri said. Both terrorists were captured, and one was wounded by a gunshot from security forces.

Police had initially said there might be a third attacker but later ruled that out after extensive searches and examining security camera footage.

Tel Aviv’s Ichilov Hospital said the four slain people had been brought to the facility in critical condition and later died of their wounds.

Meital Sassi told Channel 10 that she was out with her family celebrating her son’s birthday at the Sarona market when she heard shots and “immediately understood it was a terror attack.”

“We ran like lighting with the baby and the stroller,” she said. “I yelled at people who didn’t understand what was happening, to run.”

“I was with the family, eating pizza,” one customer, named Annette, told Channel 10. “We heard the shots, we didn’t know what was happening, and everybody got down on the floor. We managed to escape to a cellar.”

Footage released from security cameras inside the restaurant showed the pair, dressed in suits and ties and posing as customers, suddenly pull out guns and open fire. Diners started fleeing, and one of the terrorists shot a man at point-blank range and waved a knife, before the pair fled.

“The two men looked like any other customers,” the manager told Ynet. “They were carrying bags. Didn’t shout anything. They just pulled out their guns and started shooting.”

Shlomi Hajaj, director of the market, told Channel 10 that security guards at the entrance prevented the attackers from entering, “averting a bigger disaster” as the market was packed with people.

Police said the two terrorists were members of the same family from the Palestinian village of Yatta, near Chevron.

Hamas praised the attack but did not claim responsibility for it. Hamas official Mushir al-Masri called the shootings a “heroic operation.” The group later issued an official statement promising the “Zionists” with more “surprises” in the Muslim holy month of Ramadan.

Prime Minister Binyamin Netanyahu met with his defense minister and security leaders shortly after the attack.