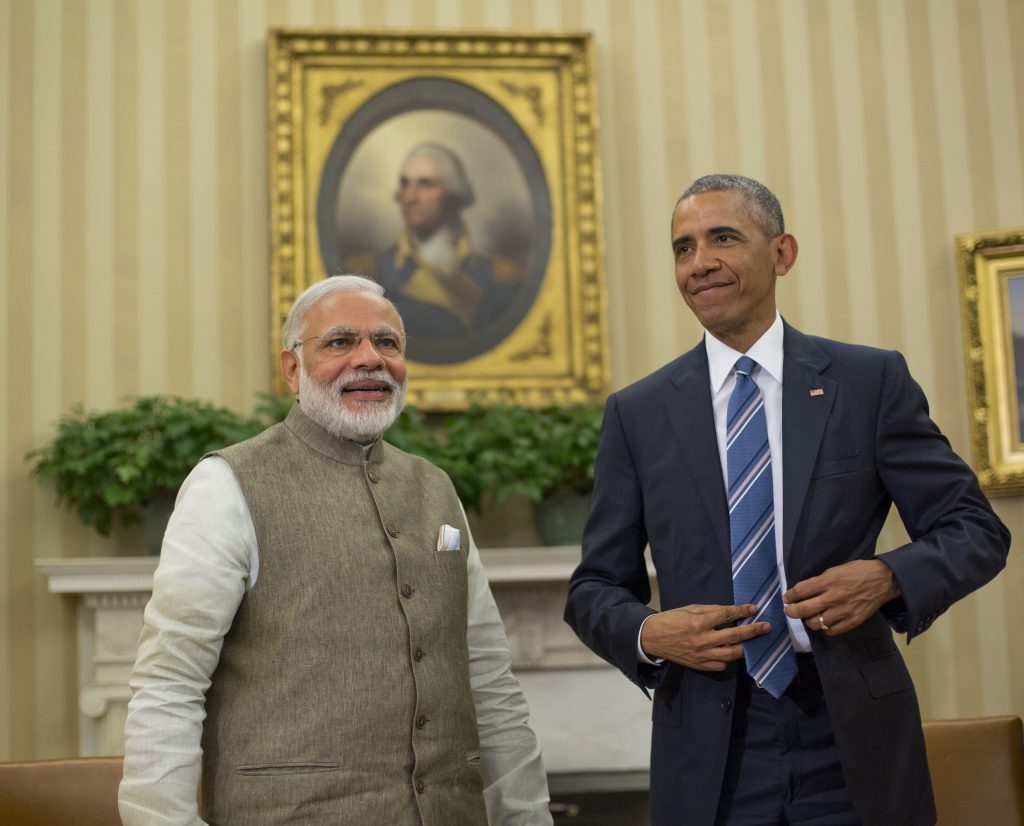 President Barack Obama met with India’s Prime Minister Narendra Modi at the White House on Tuesday, seeking to advance ties between the world’s two largest democracies and build on a much-vaunted friendship between the two leaders.

A flag-bearing military honor guard greeted Modi as he arrived at the entrance to the West Wing for talks the White House said would focus on climate change and clean energy, security and defense cooperation, and economic growth.

This is Modi’s fourth visit to the U.S. since he took office two years ago, and his seventh meeting with Obama. On Wednesday, the Indian leader addresses a joint meeting of Congress.

His visit began Monday, when he placed a wreath at the Tomb of the Unknowns at Arlington National Cemetery. He also met Attorney General Loretta Lynch during a ceremony marking the repatriation of more than 200 artifacts to the Indian government.

Modi and Obama seem to have forged a bond. When Obama visited India last year, Modi pulled the president into a bear hug as he stepped off Air Force One, and the two leaders have publicly praised each other.

Modi “transcends the ancient and the modern,” Obama wrote in Time magazine. “Barack and I have formed a bond, a friendship,” Modi said.

But Indian political analysts see the Indian leader carefully shaping the country’s political narrative by putting himself at the center of any diplomatic achievement.

India has long felt slighted by the global powers, seeing itself as a powerful, highly educated country that is all-too-often dismissed for its poverty, dirty streets and the lingering power of its caste system.

The respect is particularly sweet in Washington. Modi was denied a visa to visit the U.S. in 2005, three years after religious riots killed more than 1,000 Muslims in the western state of Gujarat, where he was then the top official. American officials largely avoided contact with him over suspicions that he was involved in the rioting or did not do enough to stop them, until he became prime minister in the 2014 landslide elections

Modi is on a five-nation tour that has also taken him to Switzerland, Afghanistan and Qatar. After the U.S., he will visit Mexico.

Obama has much to gain from good relations with Modi, from increased U.S.-India trade to closer ties to another country worried about the rise of China.

In many ways, the Washington-New Delhi relationship has not lived up to its potential since a landmark 2008 nuclear energy agreement. That pact had seemed to signal the end of three decades of Cold War suspicions, when the U.S. was more focused on ties with India’s archrival, Pakistan, and many in Washington believed India was far too friendly with the Soviet Union.

But things haven’t always gone as planned: There was the 2013 arrest in New York of an Indian diplomat, which infuriated India, and displeasure in Washington over a 2010 Indian liability law on accidents at nuclear power plants. U.S. lawmakers say it’s still too hard for Americans to invest in India, even with some easing of restrictions under Modi.

Still, U.S.-India trade has grown dramatically since the 2008 accord, expanding from $60 billion in 2009 to $107 billion in 2015. The U.S. has also become a major supplier of military hardware to India. Progress is expected to be announced Tuesday on U.S. investment in nuclear power in India and on commitments in combating climate change.