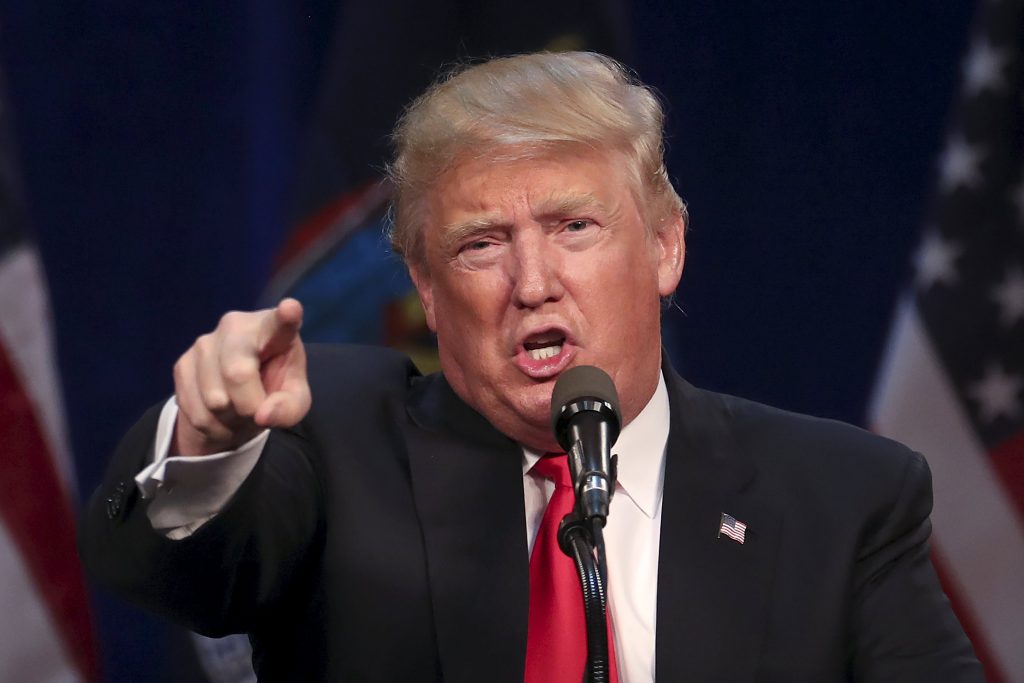 Donald Trump says he made “a lot of money” in a deal years ago with Muammar Gadhafi, despite suggesting at the time he had no idea the former Libyan dictator was involved in renting his suburban New York estate.

In an appearance on CBS Sunday, Trump said: “Don’t forget, I’m the only one. I made a lot of money with Gadhafi, if you remember.”

Trump said Gadhafi “had to make a deal with me because he needed a place to stay.”

He says Gadhafi “never got to stay there. And it became sort of a big joke.”

The presumptive Republican nominee was talking about a bizarre incident in 2009, when Gadhafi was in desperate search of a place to pitch his Bedouin-style tent during a visit to New York for a meeting of the U.N. General Assembly.

After trying and failing to secure space in Manhattan’s Central Park, on the Upper East Side and in Englewood, New Jersey, the Libyan government turned to Trump’s 213-acre Seven Springs estate in suburban Bedford, New York.

Gadhafi never stayed at the property, but it was nevertheless a spectacle. Reporters flocked to the town to watch construction crews erect a white-topped tent that was lined with a tapestry of camels and palm trees and outfitted with leather couches and coffee tables.

At one point the tent was torn down after the Town of Bedford threatened to sue Trump personally — and was then re-erected, to the town’s chagrin.

At the time, Trump distanced himself from the matter, hinting that he’d been tricked into renting his land. Representatives of Gadhafi — loathed in the U.S. due to his ties to terrorism — had falsified the identity of their client in other instances to make renting property easier.

Before the tent was re-pitched, Trump said he had “no idea” that Gadhafi might be involved in the deal to rent a section of the estate, a town official said. Bedford Town Supervisor Lee Roberts told The Associated Press at the time that Trump told her that, as far as he knew, his arrangement was with partners in the United Arab Emirates.

“We have business partners and associates all over the world. The property was leased on a short-term basis to Middle Eastern partners who may or may not have a relationship to Mr. Gadhafi. We are looking into the matter now,” Trump organization spokeswoman Rhona Graff said in a statement at the time.

But Trump had changed his tune two years later, when he boasted of having defrauded the Libyan leader on the deal.

“I dealt with Gadhafi. Excuse me. I rented him a piece of land. He paid me more for one night than the land was worth for the whole year or for two years. And then I didn’t let him use the land. That’s what we should be doing,” Trump said in a 2011 interview with Fox News.

He reiterated the claim on CNN that same year. Trump said he had leased Gaddafi “a piece of land for his tent. He paid me more than I get in a whole year. And then, eh, he wasn’t able to use the piece of land. … So I got in one night more money than I would have gotten all year for this piece of land up in Westchester. And then didn’t let him use it? That’s called being intelligent,” Trump said.

Trump campaign spokeswoman Hope Hicks did not respond to questions Sunday about whether Trump was in fact aware at the time that he was dealing with Gadhafi and how much he made from the deal.

Bedford Town Attorney Joel Sachs, who dealt with Trump directly on the issue, said that Trump insisted to town officials that he didn’t know about the Gadhafi connection — and that officials suspected he was lying.

“We believe that Trump knew that he had leased his property to Gadhafi,” Sachs said. “He definitely denied that he knew, but we had gotten a lot of evidence.”

Roberts, the former Bedford town supervisor, said Sunday she didn’t remember much about the back-and-forth, but agreed it was a mess. “It was a very emotional time. People got very upset at the thought of him coming here,” she said.

But there was also an element of the absurd. “There was a goat involved. They were going to kill a goat and have it for dinner,” she said. When Gadhafi didn’t show, “it got a reprieve.”

Roberts said she was offered the goat as a souvenir of sorts, but had to turn it down.

“No, we can’t have a goat in my town house!” she recalled with a laugh.