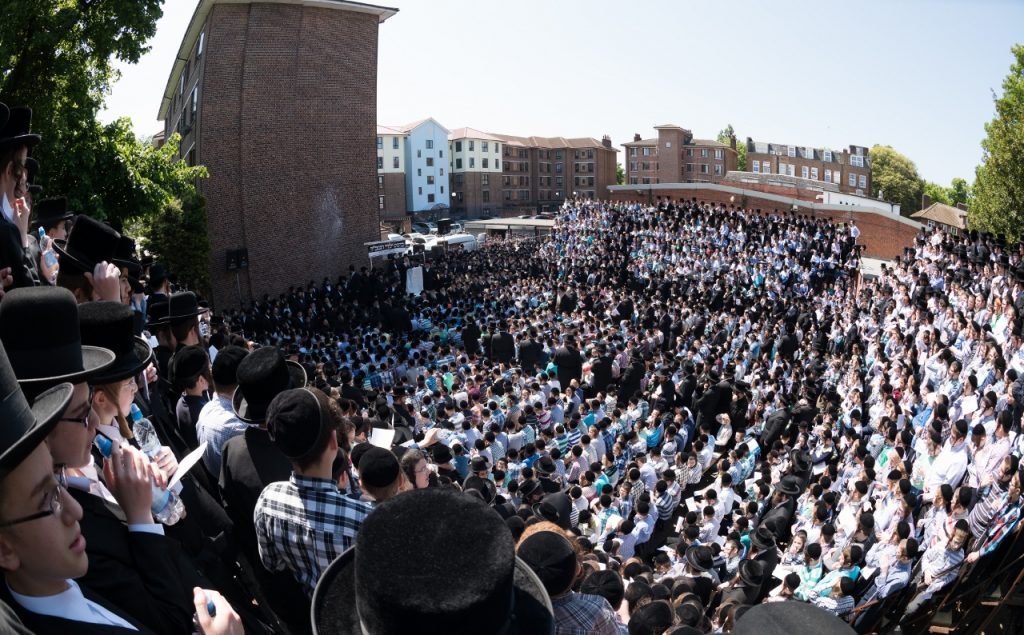 Talmud Torah talmidim in Manchester and London marked Erev Rosh Chodesh Sivan with a Yom Tefillah as a call to show our commitment to Torah education and to pay tribute to those who work to enhance and protect it.

A major event was held in Stamford Hill, with nearly 2,500 talmidim from the kehillah’s many mosdos holding an Atzeres Yom Tefillah in order to stress the importance of upholding Torah U’mesorah through chinuch in the U.K., and the values which underpin those goals. They recited Tehillim and Ani Ma’amin, and then joined in the highlight of the event: a ma’amad Kiddush Hashem, when all the talmidim joined in kabbalas ol Malchus Shamayim in the presence of the Union of Orthodox Hebrew Congregations Rabbinate and all the town’s Rabbanim.

Tributes were paid to Rabbanim, mechanchim and askanim who have enabled Torah education to flourish in the Kehillah.

Rav Yidel Baumgarten, shlita, said, “The exemplary behavior of these thousands of children throughout this event is tribute to the excellent education and high moral standards that our system delivers.

“We thank G-d that we are privileged to live in a Malchus shel chessed, a tolerant country that has a long tradition of respect for religious freedoms and for our Jewish faith.

“Many of our parents escaped to these shores from forces abroad who wanted to destroy us. We have been fortunate to be able to thrive and uphold our religion, ethos, and culture unhindered, whilst contributing positively to society as law abiding citizens.

“However, there are influential secular forces seeking to impinge on our rights, and our children have gathered here to pray to the Al-mighty that those in authority ensure that those freedoms that we have often taken for granted remain unfettered, so that being a good British citizen does not mean compromising our Torah-true values.”