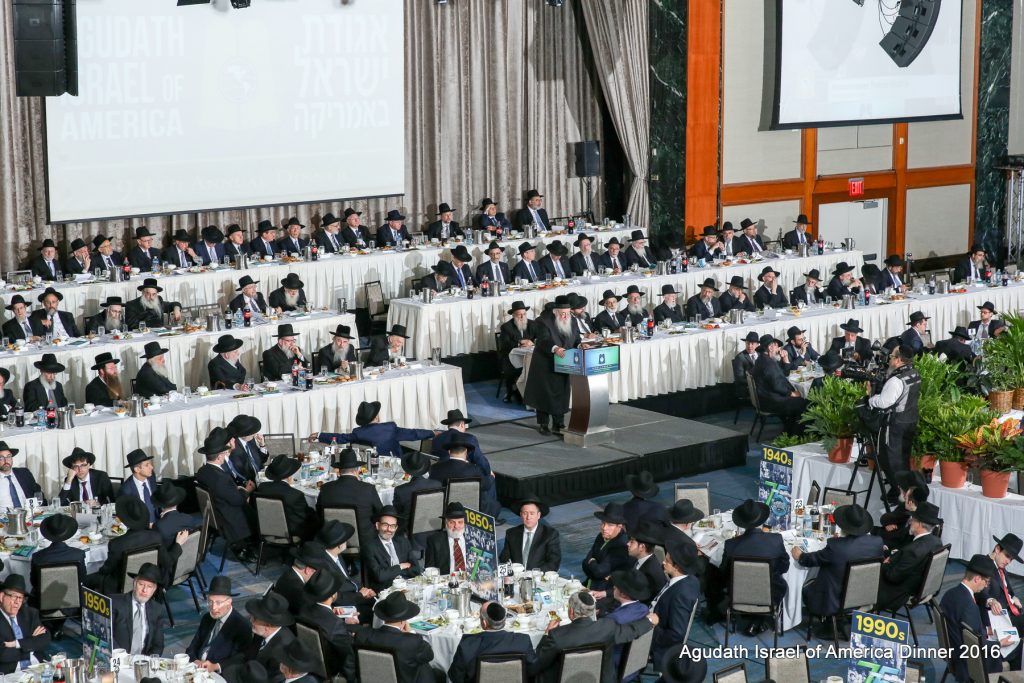 Over a thousand people gathered at the Hilton New York in Midtown Manhattan on Sunday June 5th for Agudath Israel of America’s 94th annual dinner, paying tribute to Camp Agudah in honor of the camp’s 75th anniversary.

The evening overflowed with emotion as former campers and staff members reminisced freely about their camp experiences as well as the profound influence that Camp Agudah has had, and continues to have, on their lives. A major focus of the program was the historic role Camp Agudah has played in the development of the Torah community in the United States.

Camp Agudah itself was the recipient of Agudath Israel’s Rabbi Moshe Sherer Memorial Award, with long time camp director Meir Frischman, who will be retiring after 40 years in his post, accepting the award on behalf of the camp.

Agudah executive vice president Rabbi Chaim Dovid Zwiebel, who presented the awards for the evening, noted that Rabbi Moshe Sherer had a special place in his heart for Meir Frischman, knowing that he could trust him implicitly to run all of the Agudah camps with precision and perfection. Clearly moved, Reb Meir noted that Rabbi Sherer had taught him to give his all in every endeavor. In the course of his remarks, Reb Meir also gave special recognition to the camp’s long time head counselor Rabbi Simcha Kaufman.

The Reb Elimelech Tress Memorial Award was presented to the Tress family. Rabbi Zwiebel noted that while Mike Tress, z”l, was instrumental in saving European Jews from the horrors of the Nazi era, he was also simultaneously laying the groundwork for a Torah community in the United States, which included the creation of the Agudah camps.

The Rav Aharon Kotler Memorial Award was presented to the family of Rabbi Syshe Heschel, z”l, who spent many years as camp’s head counselor and program director. Rabbi Heschel was remembered by Rabbi Zwiebel as a “Chasidishe Rebbe without portfolio,” recalling his “radiant smile and bren” that inspired generations of Camp Agudah campers.

The Moreinu Yaakov Rosenheim Memorial Award was presented to the family of Rabbi Boruch B. Borchardt, z’l, another beloved figure who was part of Camp Agudah from its infancy. Rabbi Zwiebel shared the words of one Agudath Israel staff member who described Rabbi Borchardt after his passing as “the glue that held everything together.”

Additionally, Rabbi Yonah Feinstein, retiring as director of special projects, was honored with a silver becher for over 20 years of dedicated service to the Agudah.

Among those in attendance for the evening were respected rabbonim, Agudah members, askanim, elected officials, former campers and other Agudah supporters. The magnificent harmonies of the Mezamrim choir drew guests into the ballroom, where they eagerly sat down to peruse the dinner journal as well as a short excerpt from the book They Called Him Mike, detailing Mike Tress’s involvement with Camp Agudah.

The evening’s program was opened by Agudath Israel’s executive director Rabbi Labish Becker, who called upon Rabbi Shlomo Mandel, Rosh Hayeshiva, Yeshiva of Brooklyn, to lead the assemblage in Tehillim. Dinner chairman Shrage Goldschmidt kicked off the evening by thanking the many elected officials in attendance and detailing the Agudah’s multi-faceted efforts that impact members of the Jewish community nationwide.

The Novominsker Rebbe, Reb Yaakov Perlow, shlita, Rosh Agudas Yisroel, shared his own memories of Camp Agudah, noting that the camp experience is life changing and that he still sings the zemiros that he learned in camp decades ago. Rabbi Perlow lauded Rabbi Sherer as a visionary and praised Rabbi Chaim Yisroel Belsky, zt”l for his role in strengthening Camp Agudah as a true makom Torah. Describing “geshmak” as the foundation of Yiddishkeit, the Rebbe warned of the dangers that lurk, both from technology and those who seek to undermine the very essence of a Torah lifestyle, saying that only by incorporating simcha into our everyday lives and our limud Torah will we be able to counter the many negative influences that threaten our homes and our families.

Rabbi A.D. Motzen, national director of state relations for Agudath Israel, spoke briefly, praising the many Agudah representatives throughout the United States who advocate for the Jewish community on a daily basis while earning lawmakers’ highest respect for their devotion and tireless efforts on behalf of others. Then, short video, titled Agudath Israel Across America, showed many Agudah representatives hard at work, lobbying government officials at all levels, hoping to effect changes to benefit the Torah community.

Rabbi Abba Cohen, Agudath Israel’s vice president for federal governmental affairs in Washington D.C., introduced Senator Charles Schumer (D-NY), who spoke briefly but passionately about the anti-Israel BDS movement, stressing the importance of recognizing the movement as an expression of anti-Semitism. On a similar note, Rabbi Chaim Dovid Zwiebel praised New York Governor Andrew Cuomo for having issued an executive order earlier in the day stating that New York will not do any business with any company that boycotts Israel.

Dinner chairman Shrage Goldschmidt gave a heartwarming overview of the 75 years of Camp Agudah, singling out Rabbi Belsky for the many roles he played in camp and expressing profound gratitude to both Meir Frischman and Rabbi Simcha Kaufman for their endless contributions to camp. A poignant video showing clips of Camp Agudah from its earliest days and its continued evolution over the decades depicted the faces of dozens of campers, the many gedolim who came to visit and recollections of Camp Agudah from notable alumni including Rabbi Paysach Krohn, Rabbi Nosson Scherman, Rabbi Yehuda Oelbaum and Rabbi Naftali Basch, among others.

Participants mingled throughout the night, reflecting on the many accomplishments of Agudath Israel of America and the position of prominence it has achieved by advocating endlessly on behalf of the Torah community.

“The Agudah has always been on the front lines of the community, earning the respect of its neighbors and the community it serves,” said New York City Comptroller Scott Stringer. “I have enjoyed a great relationship working very closely with the organization.”

While many came to show their support for the Agudah’s efforts and to experience the ultimate camp reunion, the high turnout sent a significant message of its own.

“It is very important that all the elected officials, city and statewide, get to see that we really have a constituency,” observed Leon Goldenberg, a member of the Agudah’s board of trustees. “When we call on them and we meet with them, they think we are just a small group, but coming to the dinner they realize that we represent thousands and thousands of people.”

“The challenges and the obstacles that we have today living in America as Jews are deeply disturbing,” added Chaskel Bennett, a member of the Agudah’s board of trustees. “Many things that we take for granted have come under attack and Klal Yisroel needs a strong Agudas Yisroel more than ever to counteract those attacks and to present an articulate vision and voice of who we are and what the Orthodox Jewish community stands for.”

While the Agudah’s many accomplishments were an important part of the dinner, there was no doubt that the star of the show was the guest of honor, Camp Agudah, and everyone in attendance shared the very real impression that Ruach Country had made its way to the Hilton for the night.

Shlomo Werdiger, chairman of the Agudah’s board of trustees, described Camp Agudah as “one of the most beautiful services” provided by the Agudah, noting since its opening in Ferndale in 1942, thousands and thousands of campers have called Camp Agudah home.

“A lot has changed over the course of 75 years,” observed Rabbi Zwiebel. “But the essential nature of giving young people an opportunity to grow in an atmosphere where the geshmak of Yiddishkeit is brought out is a tremendous thing which has historically had a major impact on the development of the Torah community here in the United States. We hope to continue to do so for many years to come.”