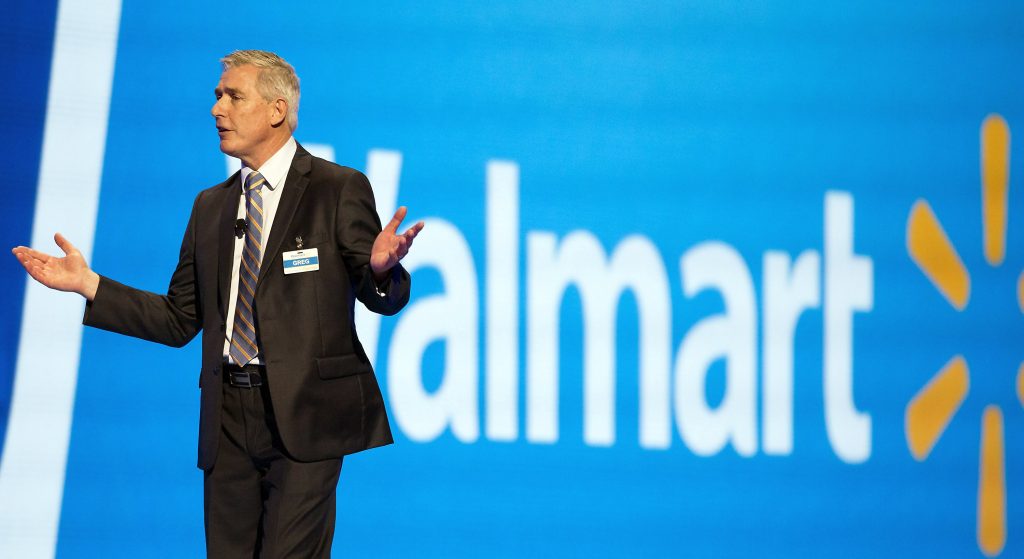 Wal-Mart executives pushed the message to shareholders and employees Friday that it’s making big changes in a fast-shifting retail landscape that will position the company for more success.

The company is at a crossroads. Its long-held dominance in pricing has been chipped away at, both by Amazon.com and dollar stores. But it’s fighting back on multiple fronts, growing more aggressive with prices and going after Amazon, both online and on the doorstep, by expanding delivery services.

“Change is never easy. It takes time. … But we are optimistic about the future,” said Chairman Greg Penner, the son-in-law of board member Robson Walton, who is the son of Wal-Mart’s late founder Sam Walton.

Wal-Mart is also spending money on its stores and its staff. It’s in the second year of a $2.7 billion investment in training and higher wages, with the goal of making Wal-Mart a place people want to be.

Changes have been painful at times. The company announced this year it would shutter 269 stores worldwide, about half of them in the U.S. That’s a tiny fraction of its locations worldwide, but was a rare pruning for Wal-Mart, particularly on its home turf.

Yet those maneuvers to spruce up stores and increase wages appear to be paying off.

The company, based in Bentonville, Arkansas, posted its seventh consecutive quarter of rising comparable-store sales at Wal-Mart locations in the U.S., which account for 62 percent of annual revenue. It expects sales to grow again this quarter. Traffic counts are up for the sixth straight quarter.

Amid a disastrous quarter for many retailers as a whole, Wal-Mart excelled.

But red flags have appeared as Wal-Mart digs in to fend off Amazon.com. Overall revenue in the fiscal year ended in January declined slightly to $478.6 billion, excluding revenue from membership fees and other income. That marked the first annual drop since the company went public 45 years ago.

Wal-Mart’s e-commerce growth has slowed dramatically, even as it escalates investment there. Global e-commerce sales growth slowed to 7 percent during the first quarter, a notable downturn from nearly 30 percent two years ago.

“Domestically, Wal-Mart’s challenge remains unchanged as it attempts to adapt to a changing retail environment in which stores are only ‘part’ of the environment and not ‘only’ the environment,” wrote Credit Suisse analyst Michael Exstein.

Still, Wall Street appears optimistic. Wal-Mart shares are up 16 percent this year, while the Standard & Poor’s index for multiline retail is up only 2.5 percent.

Here are some steps Wal-Mart is taking:

– REASSERTING IT’S A LOW-PRICE LEADER: Wal-Mart is cutting prices on an array of products over the next few years, though it’s not releasing specifics. Executives said that in the past few years, it hadn’t been as aggressive on prices as it should have been. Also, looking back at formulas that worked, the company is bringing back the smiley face in its stores and on ads after a decade in the shadows. The company said nearly 70 percent of customers still equate the image with savings.

-EXPANDING ONLINE: Wal-Mart is increasing its online options, including groceries. Starting this week, it added 14 new markets for online grocery pickup for a total of about 200 stores in 54 markets. Wal-Mart also plans to test grocery deliveries in Denver and Phoenix using ride-hailing companies Uber and Lyft. That’s in addition to a pilot program that started quietly in March, making the online delivery service Deliv available to Sam’s Club customers in Miami.

Wal-Mart trimmed the delivery time for its free-shipping pilot program to two days from three, and it’s cutting a dollar off the membership price to $49 a year. Amazon membership costs $99, but it comes with other perks including product subscriptions, one- and two-hour Prime Now delivery, streaming music and video, photo storage and more.

MAKING DISTRIBUTION CENTERS MORE EFFICIENT: Wal-Mart ships goods directly to customers from 80 stores and uses 4,500 stores as pickup points. But it’s also trying to fulfill orders more quickly at distribution centers. It offered a peek at a drone it’s testing that skitters around the massive center, taking 30 pictures per second and flagging misplaced items. Wal-Mart says drones allow it to confirm inventory in about a day or less, rather than a month using traditional means. The technology could be rolled out in the next six to nine months.