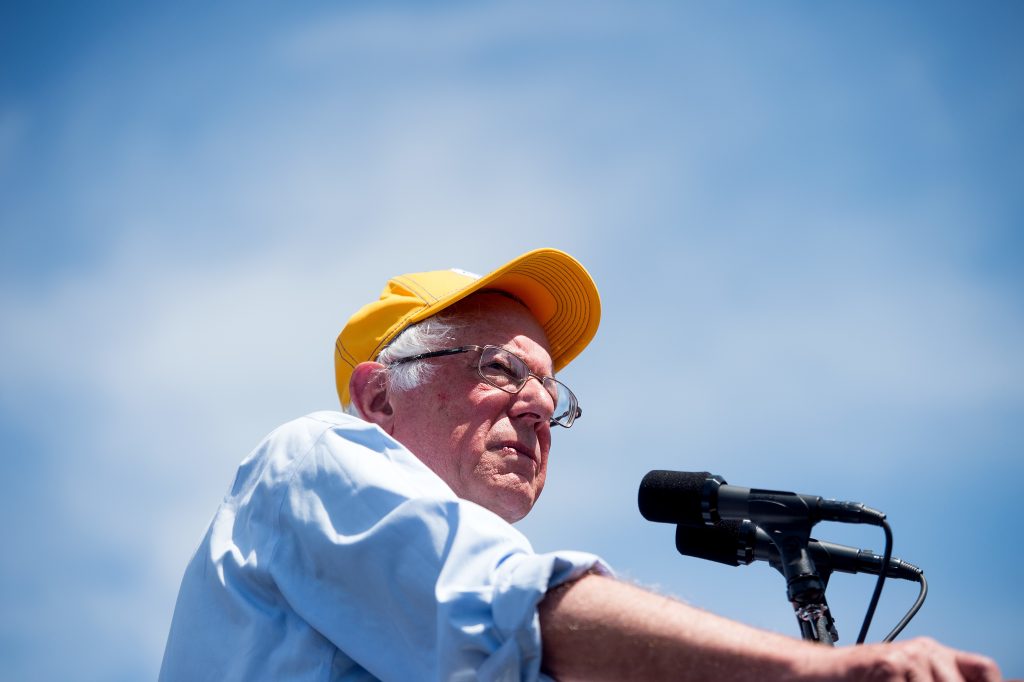 Nearing the end of the primary season, a defiant Bernie Sanders predicted that the Democratic presidential process would lead to a contested summer convention against Hillary Clinton, pushing back against the likelihood that the former secretary of state will soon declare victory.

Speaking to reporters three days before the California primary, Sanders showed few signs of surrender, vowing to take his bid to the Philadelphia convention in July. He urged news organizations not to anoint Clinton as the presumptive nominee through a combination of pledged delegates and superdelegates.

“It is extremely unlikely that Secretary Clinton will have the requisite number of pledged delegates to claim victory on Tuesday night,” Sanders said. “Now I have heard reports that Secretary Clinton has said it’s all going to be over on Tuesday night. I have reports that the media, after the New Jersey results come in, are going to declare that it is all over. That simply is not accurate.”

Later, Sanders was rallying supporters outside the entrance of the Los Angeles Memorial Coliseum, where he pointed to his differences with Clinton on super PACs, the federal minimum wage and the Iraq War.

Sanders told reporters by the end of the primaries on June 14 neither candidate would have enough pledged delegates to declare victory and would be dependent upon superdelegates to reach the magic number. “In other words, the Democratic National Convention will be a contested convention,” he said.

Clinton currently leads Sanders among pledged delegates by a count of 1,769 to 1,501, an edge of 268 pledged delegates. An Associated Press count of superdelegates shows Clinton leading 547 to 46. Clinton is currently 67 delegates short of clinching the nomination through the combination of the two and is poised to cross that threshold in the coming days.

Sanders wants Democrats to break with tradition. In 2008, then-Illinois Sen. Barack Obama clinched the nomination against Clinton through a mix of both types of delegates. And superdelegates have historically backed the candidate who wins the most delegates from primaries and caucuses, a threshold Clinton is likely to cross this week.

The Vermont senator is seeking a victory in California, New Jersey and four other contests on Tuesday. A win in the Golden State, where polls show a tight contest, would be an embarrassment for Clinton and embolden Sanders to aggressively lobby superdelegates to switch their support to him, arguing he’s the best candidate to take on presumptive Republican nominee Donald Trump.

Clinton has begun forcefully attacking Trump on national security and his overall temperament for the White House and has largely looked past Sanders, hitting hard at the GOP real estate mogul. She told supporters Friday that “if all goes well, I will have the great honor as of Tuesday to be the Democratic nominee for president.”

Sanders is expected to return to his Vermont home on Wednesday and advisers say he intends to ramp up his courtship of the party’s superdelegates, a process that is already underway, pointing to polls showing him faring better than Clinton in head-to-head matchups with Trump.

He will compete in the District of Columbia primary on June 14, the final contest. Beyond that, Sanders’ campaign manager Jeff Weaver said they are considering whether Sanders might appear at more rallies around the country after the primaries and speak in Chicago at a gathering of Sanders’ activists on June 17-19.

But a loss in California, the nation’s most populous state, would undercut his case against Clinton.

“Once the numbers come in, I think we can begin a serious discussion among ourselves about what the right path for us is,” said Tad Devine, Sanders’ senior adviser. He added: “If he wins California and a lot of states, he’ll want to make a closing argument to the superdelegates.”

Sanders is pushing for his policy views to be included in the party’s platform and wants the party to become more inclusive of independent and working-class voters.

Recalling her own campaign against Obama in 2008, Clinton’s team has avoided urging Sanders to leave the race. But if Sanders loses California, he’s likely to face pressure to drop out.

Senate Democratic leader Harry Reid of Nevada told The Associated Press in an interview earlier this week that “sometimes you just have to give up,” a sign of what could come next.

Sanders has said he will work “day and night” to defeat Trump, whom he repeatedly assails as a divisive figure. Yet few expect Sanders to quickly follow the example set by Clinton, who campaigned extensively for Obama after suspending the roll call vote at the 2008 convention and later, became his secretary of state.

Said Weaver: “Given what he has said, I suspect there will certainly be a roll call vote at the convention.”